The Other Bush Legacy 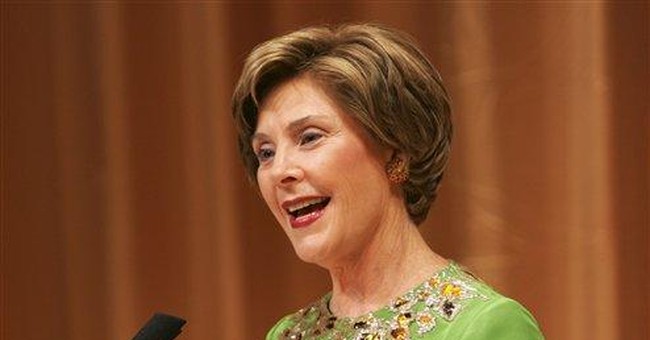 WASHINGTON -- Women, not men, will save the world.

First lady Laura Bush didn't say those precise words, but her remarks Monday to a small gathering of biographers, historians and journalists implied as much.

If she's right, America's first lady will have played a significant role in that evolution. Women's gains around the world, in places like Kabul and Riyadh, are occurring in no small part because of Laura Bush's quietly feminist maneuvering as wife of the U.S. president.

The purpose of Monday's meeting, which included lunch and a curator-led tour of the second-floor residence, was to allow the first lady's potential chroniclers access to her thoughts and future plans.

Sitting in the Yellow Oval Room that leads to the Truman Balcony, Mrs. Bush said she intends to continue helping women and children through her education and health initiatives. She also hopes to include women's leadership training as part of her husband's planned Freedom Institute at Southern Methodist University.

Fittingly, The Washington Post's front page Monday featured a story about Rwandan women running the show where once they were victims of systematic rape during that country's 1994 genocide. Last month, the Rwandan parliament became the first in the world with a female majority (56 percent), and women hold a third of all Cabinet positions, including Supreme Court chief and police commissioner general.

About that megaphone. Could we possibly get the lady an amplifier?

As one who traveled last October with Mrs. Bush to the Middle East to advance the State Department's breast cancer initiative, I've been privileged to watch her in action, as well as to appreciate the life-saving results of her efforts. Largely because of her, and the breast-cancer-crusading Susan G. Komen for the Cure organization, women in that harshly patriarchal part of the world have been given an empowering voice.

As Mrs. Bush noted Monday, health is a freedom issue. To be free, one must first be alive. Then, one must be educated.

The first lady, who is an honorary ambassador for the U.N. Literacy Decade, spoke earlier this month at the U.N. about the importance of closing the gender gap in literacy. "If women are educated, everything across the board improves for their families," she said.

Indeed, it is widely understood among international humanitarian groups that the most effective way to reduce poverty and disease is to educate women.

In Afghanistan, where Laura Bush has traveled three times, impressive strides are being made in education and equality. Today, one-third of the more than 6 million Afghan children in school are girls.

Many readers may be learning these things for the first time and wonder why. In part, it may be because Mrs. Bush's demure librarian-teacher persona has minimized her appeal to the media. But Bush's Texas manners should not be confused with passivity. She is a serious player whose White House tenure provides lessons for the next first lady.

Among them is one Mrs. Bush wishes she had learned sooner -- that the first lady has a bully pulpit and should use it. Although she gave the first-ever radio address by a first lady in 2001, urging support for Afghan women, Bush didn't hit her stride until her husband's second term.

Did she ever. Her mission has been anything but modest: to save women, educate girls, end poverty, reduce disease, expand democracy and promote freedom.

Women may not save the world -- at least not without the help of enlightened men -- but history will judge that one Laura Bush did her part.