An outpost of American valor 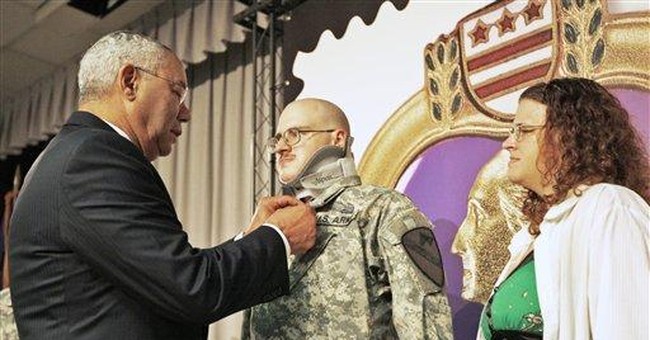 Both are serving in Iraq. Beauchamp is the soldier recently in the news and this column for writing dispatches for The New Republic about depraved behavior among soldiers whose moral moorings may have slipped a few notches.

That is, according to Beauchamp. Whether his accounts are true -- or a little bit true -- or not has been a subject of debate, primarily among journalists and the U.S. Army. TNR stands by Beauchamp's claims; the Army says the writer-soldier's accounts are false.

Enough time and ink have been devoted to Beauchamp, who admits to going to war for the sole purpose of writing a book. As a balance to that kind of ambition, now seems a good time to mention Webberley, as well as the man who brought his story to light.

First, a few words from Webberley: "Sir, I will die for this post. I have told all of my Marines that no matter what happens out here, we will hold this position at all costs."

Webberley, who at the ripe age of 23 is commanding a combat outpost, was speaking to W. Thomas Smith Jr., who left last month for his second trip to Iraq. Smith is a former Marine (though all Marines contest that once means always), journalist and author -- and a consistently honest broker of information. When he goes to Iraq, Smith doesn't stay in hotels or confine himself to Baghdad's Green Zone. On his first trip, he was with the British, operating south of Baghdad. This time, he's with the U.S. Marines -- Regimental Combat Team 2 -- operating out west in Anbar, the region where the U.S. troop surge has achieved some success as Sunnis have joined American forces against al-Qaeda.

Posting on a blog called "The Tank" at National Review's Web site, Smith says that Webberley is in the most isolated position he has yet seen. Smith described the view from his own windy perch on a sandbag:

"I can see the Euphrates River winding through the desert like a huge snake several miles in front of me. Tiny villages and some greenery run along its banks. A long, endless two-lane highway (the route I took to get here) is behind me. And a vast, rocky, dusty, orange and khaki-colored wasteland extends toward and beyond the river, beyond the highway, and in every other direction as far as I can see."

Webberley's station apparently is as crucial as it is isolated -- a radio-relay post defended by a single squad of Marines. Smith says the position is so vital to Marine communications in the Qaim region that "it cannot be surrendered under any circumstances."

As Webberley and Smith strolled the hilltop, the young corporal -- described by Smith as carrying a 9mm pistol and K-Bar fighting knife with a carved wood handle -- uttered the words quoted earlier.

The difference in attitude and purpose between a Beauchamp and a Webberley doesn't require elaboration. Cynics might argue that a 23-year-old doesn't know what he's doing, that he's a brainwashed pawn of a corrupt and ill-fated mission. Some also might mention that Beauchamp, in reporting the dark side of war -- assuming that what he has written is true -- is providing a necessary service far nobler than mere military submission.

They would be wrong about Beauchamp. Reporting truth is a noble mission -- that much is indisputable -- but victory belongs to the Webberleys of the world, not the Beauchamps. No one is insisting that only sanitized, "happy" news be funneled out of Iraq. Nor is anyone who has read history surprised that some troops behave badly in war. Gallows humor, which constitutes the bulk of Beauchamp's missives, is above all a survival mechanism in the midst of horror.

The news isn't that one soldier made fun of a disfigured woman -- or that another danced around with a piece of a child's skull on his head, as Beauchamp reported. The news is that more soldiers don't do far worse.

A few have, of course, but the vast majority of servicemen and women in Iraq conform to the kind of can-do attitude, loyalty and commitment articulated by Webberley. Thanks to brave journalists like Smith, we get to hear about them, too.