A million little piece of truthiness 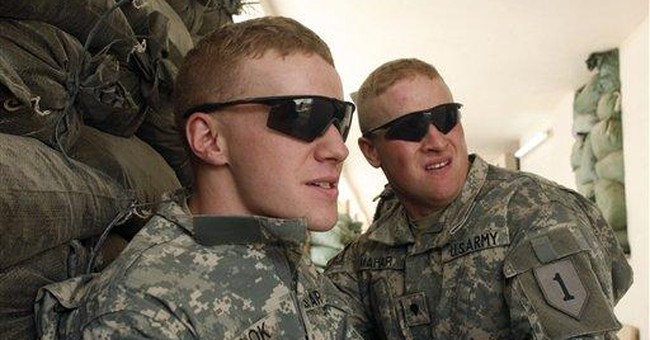 WASHINGTON -- The curious case of a soldier/writer who penned dubious dispatches from Iraq about morally corrupt American soldiers continues apace.

Amid some light this week is much shadow.

Following two weeks of investigation, re-reporting and fact checking, it appears that the writer in question has not been precisely honest.

To briefly recap: Pvt. Scott Thomas Beauchamp was writing stories for The New Republic (TNR) under the pseudonym, Scott Thomas -- allegedly relating insider stories from the front lines. Some of Thomas' stories, appearing in TNR didn't ring true to close readers, some of whom had been in Iraq at the times and places where Beauchamp's tales supposedly took place.

When The Weekly Standard (WS) began questioning the reports, a battle of credibility ensued. TNR editors defended their writer, who under pressure made his identity public, while WS and various bloggers continued to insist on corroborating evidence. The Army, meanwhile, began its own investigation.

Among Beauchamp's reports were stories he either witnessed or participated in about ridiculing a woman -- either a soldier or contractor -- whose face had been disfigured by an IED; how one soldier enjoyed using his Bradley Fighting Vehicle to mow down dogs; and how another soldier wore as a cap a child's skull fragment that reportedly was lifted from a mass grave.

Red flags went up immediately among people who know something about mass graves, Bradleys and military order.

Days after TNR editors posted a statement on their Web site claiming that Beauchamp's stories had mostly checked out, the WS reported that a military source close to the Army investigation said that Beauchamp signed a sworn statement that he fabricated or exaggerated his stories.

The incident involving the disfigured woman, for example, took place (maybe) in Kuwait before Beauchamp's tour of duty began in Iraq -- not in a mess hall in Iraq as originally reported -- according to TNR's own editors.

Separately, Maj. Steven F. Lamb, deputy Public Affairs Officer for Multi-National Division-Baghdad, told the WS' Michael Goldfarb, who has been leading the charge against Beauchamp, that the private's allegations "were found to be false."

So, we have two reputable magazines telling two different, compelling stories. We also have a writer who wrote on his personal blog that he wanted to go to this "misguided" war "just to write a book." And we have an Army investigation in the midst of, not incidentally, a war. Fog, it seems, is everywhere.

To casual news consumers, the duel between two magazines may seem like much ado -- or, perhaps, more of the same ol' same ol'. Thanks to such people as The New York Times' Jayson Blair and TNR's own Stephen Glass, fabrications are no longer considered unusual.

Truth isn't only unexpected, it has become fungible even to some readers. As one wrote to me following an earlier column about the dubious diarist, "It doesn't matter if Beauchamp's reports are true. These things are true somewhere in Iraq if not exactly where he said."

He's right of course. It's always cocktail hour somewhere and a stopped watch is right twice a day. Indeed, far worse things than those described by Beauchamp have happened in war. That war is morally and emotionally distorting, as TNR's editors described Beauchamp's tales of soldier angst, is as revealing as news that water is wet.

Possibly -- even probably -- Beauchamp witnessed events similar to those he described. But it does matter if what he wrote wasn't completely true. Truthiness, to borrow Stephen Colbert's word for "sorta true," isn't the standard for American journalism or for 99 percent of journalists -- the ones who put their real names on their stories and take the heat if they're wrong.

That doesn't mean journalists don't bring their own biases to the table. But making a factual error, which is to be human, is not the same as inventing, which is to lie.

TNR editors took a chance with Beauchamp -- a big one. The whole truth may never be known with certainty, but this much we do know: Beauchamp is not a journalist. He is a would-be author who was ambitious enough to join the Army and go to war for the possibility of a future book. Whatever yet transpires, it would seem that Beauchamp succeeded in revealing the morally and emotionally distorting effects of war he set out to illuminate.