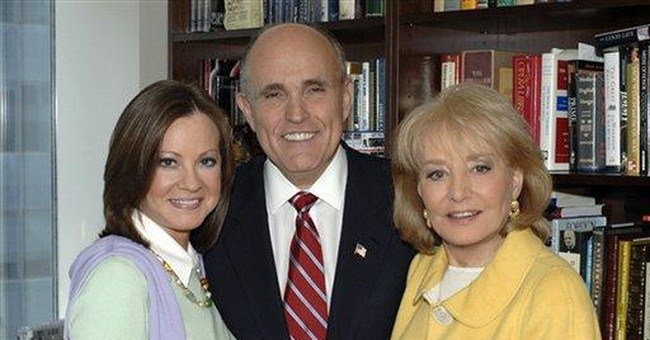 The topic for this year's dog days seems to be: Just how awful is the future White House spouse?

Vanity Fair has set a new standard for catnip with Judy Bachrach's portrait of aspiring first lady Judith Giuliani. Forget asking who would want to be president. Who in her right mind would ever want to be the first lady?

Or the first gentleman, as the case, indeed, may be. Retract that question.

Bill Clinton can't wait for his Vanity Fair cover -- he'll be wearing an apron and baking cookies, no doubt. But there isn't much left to learn about the former president. We know everything from the cut of his drawers to the angle of his repose. "TMI" (too much information) was coined for the Clinton White House and the Starr Inquisition.

We are equally thorough in our inspection of potential first wives, apparently, though in different ways. Dirty little secrets have less to do with alleged sexual peccadilloes than with more subtle indiscretions of class and taste. We love the working class, just as long as they don't try to use the good silver.

Bachrach's piece cut close to the pedigree. Not only was Mrs. Giuliani portrayed as using husbands to advance her personal socio-economic agenda, but her squarely middle-class upbringing was put on snobbish display. Hint: her parents' porch is carpeted.

Or, as an old friend described her childhood lifestyle: "They ate dinner every night at 5 p.m. Salad was not something they knew much about. Hoagies and potatoes and corn they knew about."

Ah, where would we be without our "old friends"?

In any case, the young Judith's culinary experiences closely parallel those of most Americans, the majority of whom are not as concerned as, say, Barack Obama is with the high cost of arugula.

Speaking recently at a Rural Issues Forum in Adel, Iowa, the Illinois senator expressed solidarity with the state's corn and soybean farmers by noting that crop prices hadn't risen even though grocery store prices had:

"Anybody gone into Whole Foods lately and see what they charge for arugula?" the senator asked. "I mean, they're charging a lot of money for this stuff."

Um, that would be a 'no.' For starters, Iowa doesn't have a Whole Foods store. And chances are good that most Iowans are more interested in the cost of, oh, corn and soybeans.

It's a just a hunch, but I'm guessing the wily and studious Mrs. Giuliani wouldn't have made that slip -- or allowed her husband to. Mrs. Giuliani, who wore a diamond- and pearl-studded tiara to her wedding, is nothing if not attentive to detail.

That she is ambitious, meanwhile, is no secret to anyone who has met the woman. With one very firm handshake, Mrs. Giuliani conveys three things: Labrador devotion to her husband, caffeinated intelligence and nail-bed ambition. That is, she would sleep on a bed of nails to get "there" -- whatever and wherever "there" is.

For some, "there" is a well-written book or a Babette's feast. L'art pour l'art.For others, nothing less than the White House will do. Put Mrs. Giuliani in the latter category, but then ask: Is she more ambitious than other aspiring first ladies?

Does Elizabeth Edwards want the office less? Or are her reasons more palatable by virtue of her style? Is Michelle Obama similarly inoculated?

Not so fortunate is the "trophy wife," as Fred Thompson's younger, blond wife has been dubbed. Can a good-looking blonde ever get a fair shake? Is she too shapely for an oval office? Passionate and intelligent is how she's been described by a mutual friend. But she's got cleavage! How much is too much? Hillary Clinton's office wants to know. Or was that Nancy Pelosi's?

The hits just keep a-comin'. One thing we know: Women are scrutinized in ways men never are -- and usually by other women. As the fabled scorpion said to the frog that was ferrying it across a stream -- right after inserting its stinger and dooming them both to death -- It's our nature.

Americans are suspended, meanwhile, in a time warp of traditional expectation and contemporary reality. Women are liberated as never before. They enjoy sex without marriage, get divorced, raise kids by themselves, and speak up when they've got something to say.

Judith Giuliani, in other words, is a mirror on our times. It would seem we don't much like our reflection.