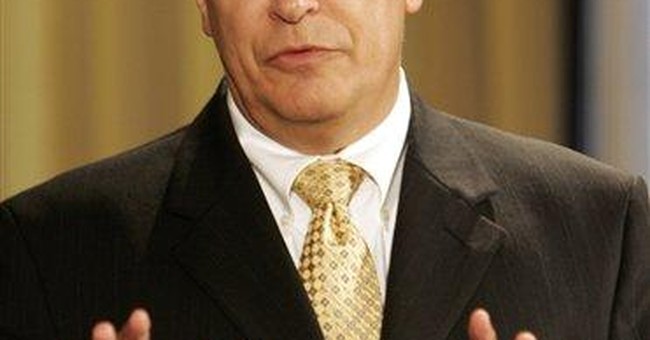 WASHINGTON -- The fallacy of hate crime laws -- the prosecution of which requires a degree of mind-reading not yet available to most Earthlings -- has been cast into stark relief the past few weeks following an interracial rape-murder that has bestirred white supremacists and led to death threats against an African-American columnist.

The spark that caused the firestorm was the brutal rape-murder of a young white couple, Channon Christian and Chris Newsom, who were carjacked last January in Knoxville, Tenn. Five blacks -- four men and a woman -- have been charged in connection with the slayings.

Because the story didn't receive national media attention, some commentators and others have asserted that the media do not treat racial crimes equally. They point out that when a black stripper charged three white members of the Duke University lacrosse team with rape, the national media grabbed the story by the ankle and wouldn't let go. Not so Knoxville.

The perception of media bias is understandable -- and a credible case can be made that the media rushed to condemn the Duke athletes because it fit a recognizable racial narrative, especially in the South. But while race was clearly a factor in stimulating media interest, other factors absent from the Knoxville case -- privilege, town and gown conflicts, politics, underage drinking and the name Duke -- also added to the broader ``story'' appeal.

Nevertheless, the media's largely unskeptical embrace of the charges in the absence of due process, coincident with the horrible events in Knoxville, have stoked passions among some whites who contend that black-on-white crime is underreported.

Adding to the current heat is the decision that the Knoxville blacks won't be charged for hate crimes. Officials say that because the accused have had white friends, they weren't driven by racial hatred.

That seems a flimsy argument, but it does serve to underscore the potential errancy and misapplication of laws that rely on the subjective judgment of others' psychological motives. As the mother of one of the victims said: ``If this wasn't a hate crime, then I don't know how you would define a hate crime.''

Hate crimes are not defined only by motive, but by their effect on other members of the same group. The argument for hate crime laws is that crimes motivated by animus toward an individual because of race, sex, gender identity or disability victimize all members of that group by causing fear and intimidation.

Adding still more fuel to the media bias claim is a group of white supremacists on one side and Pulitzer Prize-winning columnist Leonard Pitts on the other. Pitts drew fire when he pointed out that the Knoxville incident wasn't considered a hate crime and refuted claims that black crime is underreported. He ended his column with four words for whites who feel oppressed: ``Cry me a river.''

That's pure columnist flare, but decidedly, um, gutsy considering the likely reaction from people who are not widely known for tolerance. A neo-Nazi group has posted Pitts' address, phone number and his wife's name on its Web site, Overthrow.com. Pitts has received hundreds of e-mails and phone calls, including several death threats that are being investigated by the FBI. Obviously, Overthrow's editor and the 280 contributors to his American National Socialist Workers Party are the definition of a fringe group that doesn't deserve so much attention. But the same also might be said about those who commit ``hate crimes.''

In 2005, among about 7,000 hate crimes -- mostly characterized by intimidation (48.9 percent) and simple assault (30.2 percent) -- just six murders and three forcible rapes were reported as fitting the hate crime definition, according to the FBI's Hate Crime Statistics report. Though we may hate ``hate crimes,'' those numbers hardly seem sufficient to justify extra laws designating a special category for certain crime victims.

Groups such as the Anti-Defamation League have insisted that hate crime laws are necessary because crimes that make minority communities fearful ``damage the fabric of our society and fragment communities.''

The Duke and Knoxville cases cast serious doubts on that premise. It is human nature to resent groups and individuals deemed more special than others. Signaling through laws (or media treatment) that one group's suffering is more grievous than another's -- or that one person's murder is worse than another's -- is also likely to fragment communities, as well as to engender the very animosities such laws are meant to deter.