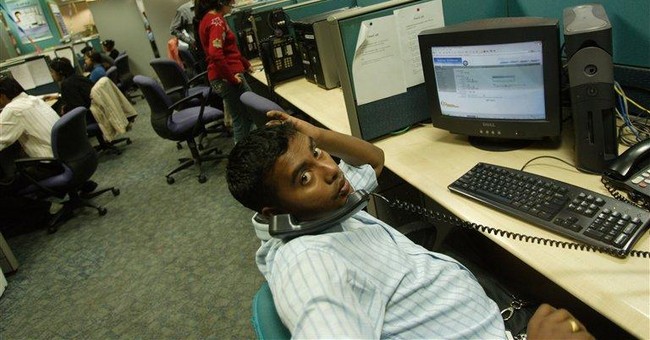 Although there are no such studies that I know of, a graph might show that Americans have been consuming increasing quantities of antidepressants in direct correlation to the growth of corporate call centers overseas.

Want your cable fixed in Appalachia? Hold one moment while we connect you to Bangalore.

Don't get me wrong. I love all peoples great and small, but I do not want to talk about my bad Internet connection with someone in Bombay named Kapil pretending to be Karen.

Anglicizing names is one of the tricks of the trade these days as more and more customer services are outsourced to other countries where call-center operators are grateful for $200 a month and an air-conditioned workspace. Invariably polite, and no doubt qualified, they are, nonetheless, not here.

Who are these people? And why do we have to talk to them? Where are Jane, Dick and Harry?

Every person reading this is familiar with the experience. Outsourcing isn't new. Gradually, and compliantly, we've become accustomed to talking to people in other countries about everything from our Web connection problems to our American Express payment.

Most people probably assume they're talking to a recent immigrant, only to realize that the person telling them that their charging privileges have been suspended is in Manila. Once this realization sets in, apparently, Americans can become unpleasant.

In India, a television sitcom -- ``The Call Center'' -- was created around calling centers and their rude Western customers. Note to world: We weren't always so rude. We weren't always on the verge. Corporate America has made us this way.

If we're not talking to India, we're conversing with chirpy robots. Interactive Voice Response (IVR) systems have become so ubiquitous that nearly all Americans have now chatted with that woman (you know the one) who makes friendly while she computes our vowels.

``I think you said, 'For you.' Is that right?'' Sure, lady, just for you. It's not that we don't like people in other countries or that accents aren't charming. The problem is that ``customer service'' is supposed to mean that the person on the other end of the line cares about you. Customer service is supposed to be user-friendly and helpful, not frustrating and enraging. Deep in our star-spangled hearts, we know that Arjun -- good fellow though he may be -- doesn't really care about us. It's a safe bet he may not even like us.

Thus, the corporate insult of hiring foreigners is compounded by the pandering of passive-aggressive non-Americans. Between robots and foreign operators -- and the powerlessness most consumers feel -- American business has robbed its citizen-customers of their dignity.

The surprise is that business has gotten away with insulting its customers for this long. Although some individuals have taken steps to ease the alienation -- Internet entrepreneur Paul English offers shortcuts to reach humans by phone at gethuman.com -- what's been missing is a national tipping point.

Mine came a few days ago while in the North Carolina mountains trying to get Internet service. After two days on the phone with Charter Communications operators in three countries (U.S., Canada and the Philippines), trying to solve a local Internet-access problem, I wondered why homicide rates aren't higher.

Finally, the ``customer service'' operator who said she was in the Philippines determined that I needed an on-site technician -- what a concept! -- but I'd have to wait 36 hours. I noted humorously (I thought) that a Charter tech was probably within a few miles of me, yet someone in the Philippines is saying he can't get to me for a day and a half.

Is this a great globe or what?

At that precise moment, no kidding, a burly mountain man rapped at the door: ``Are you Ms. Parker? I'm from Charter Communications and I'm here to fix your modem.''

Well, hallelujah and hit delete. I wanted to hug the guy. Love the accent. Love the all-American, gung-ho, can-do attitude.

``Philippines, we're done.'' I said to the nice lady on the other end.

Here's the deal, Corporate America: We want our customer service back. We want it stateside. We want it homegrown, human and yesterday.

Revolt, America! Tea to the harbor!