Planet of the Apes Redux 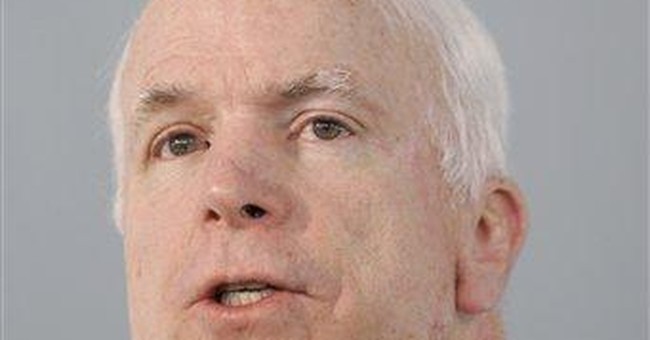 In a nation where 91 percent of citizens profess to believe in God, it's a safe bet we won't see an atheist in the White House anytime soon.

But what about a president who doesn't believe in Darwin? And are Darwin and God mutually exclusive?

These are the questions that (still) trouble men's souls. And still cause trouble for presidential candidates forced unfairly to essentially choose between God and science.

In the ``gotcha'' question of the first GOP debate, journalist Jim VandeHei, relaying a citizen's question, asked John McCain: ``Do you believe in evolution?''

A natural response might have been, ``Well, that depends on how you define evolution.'' It would seem that Clintonian nuance is off the boards for now. Instead, McCain gambled and said -- no doubt with fear and trembling in his political heart -- ``Yes.''

Next VandeHei asked: Is there anyone on the stage who doesn't believe in evolution? Three raised their hands -- Sen. Sam Brownback of Kansas, former Gov. Mike Huckabee of Arkansas and Rep. Tom Tancredo of Colorado.

As debate audiences were pondering the meaning of Darwin in the Oval Office, McCain asked permission to elaborate. McCain then added: ``I believe in evolution. But I also believe, when I hike the Grand Canyon and see it at sunset, that the hand of God is there also.''

Note to George Tenet: Thisis what you call a slam dunk. McCain was able to acknowledge both science and religion -- evolutionary theory and creationism -- and make them mutually inclusive. Some may call that ``fence-straddling'' or ``having it both ways,'' but political observers call it ``Bingo!''

The others weren't so fortunate. Like little boys called to the front of the class for public humiliation, Huckabee, Tancredo and Brownback immediately became targets of ridicule by the educated elite who, though Darwinists all, were presented with a contradiction: If Darwin was right, how did these knuckle-draggers make it to the presidential campaign podium?

The truth is, each man took a calculated risk -- or a courageous stand, depending on one's view. To say ``yes'' would have been to betray evangelical Christian voters, 73 percent of whom believe that human beings were created in their present form in the last 10,000 years or so.

To these folks, ``no'' didn't mean anti-science; it meant pro-God and conveyed a transcendent, non-materialistic view of the world. To secular Darwinists, ``no'' meant either ignorance or pandering to the ignorant -- most likely both.

On its surface, the question seems simple enough -- if oddly out of century. Darwin's theory of evolution isn't exactly hot off the presses. But it remains controversial among some people of faith -- including some respected scientists -- for whom evolutionary theory reduces man's world to a godless accident bereft of moral meaning or structure.

To the faithful, in other words, it is not such a simple question. It also was not a fair question under the circumstances. Yes or no doesn't quite cover the complex issues implicit in any mention of Darwin these days.

In a conversation after the debate, Huckabee said, ``I wish life were so simple. If it were, we'd be in a game show and not running a presidential campaign. ... If I'd had time, I would have asked whether he meant macro or micro evolution?''

That's a different sort of answer than what is inferred from a simple ``no'' forced by the manic pace of a 90-minute ``debate'' among 10 candidates, none of whom is qualified to seriously debate scientific theory. Nor, as president, should they try. In fact, Huckabee says he does believe in evolution (with qualifications) and thinks Darwin's theory should be taught in schools.

``I do know that species do, in fact, adapt and there are many instances of adaptation and mutation,'' he said, ``but I still believe that the design has a designer and the creation has a creator. I wouldn't pretend to fill in the blanks between what God created and what is today.''

Microevolution and macroevolution can't be properly distilled in this space, but broadly speaking, micro allows for the possibility of a creator. McCain more or less expressed the micro view that evolution doesn't necessarily preclude God.

These are interesting and complex issues that compel smart, thoughtful people to passionate debate and serious investigation -- too complicated, in other words, for an insta-response in a politically charged arena.

The debate question was fundamentally a setup for ridicule. No one was served and no one, alas, is the wiser.