Ignore them, and ye shall be spared many headaches 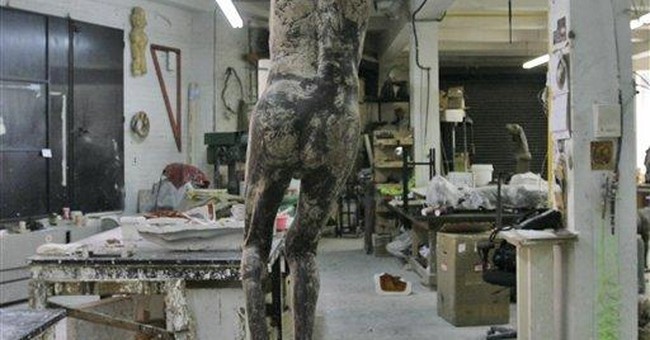 Now would seem a good time for all good Catholics to calm down. Some are making life difficult for those of us who insist that religious folks in this country are relatively sane and civilized about their beliefs and supportive of the principles, including free expression, that allow us to worship (or not) as we please.

Death threats? Isn't that what outraged Muslims do when cartoons hurt their feelings? I guess all God's children got guns.

Having now seen photographs of the chocolate figure, I can't say that I was deeply offended. It wasn't pornographic, and using chocolate as a medium isn't inherently disrespectful.

That said, no one should pretend that the sculpture was intended as a tribute to Christ. When invitations to view a nude chocolate Jesus during Easter week read ``Come Eat Jesus,'' one can without hysteria infer that the purpose is to mock those who celebrate the passion of Christ and to trivialize the sacrament of communion.

The pity is that those who felt mocked reacted with choreographic outrage, thus giving the offending camp the free publicity it craves. Catholic League watchdog Bill Donohue led the usual pep rally and, after a few days of hue and cry, the exhibit was canceled by the hotel that housed the gallery where the exhibit would have appeared.

As religious skirmishes go, it was all fairly tidy. No explosives, no body parts, no lasting damage to civilization.

Donohue, however, might have done better to lead public rosaries of reparation on the sidewalk outside the hotel rather than ranting on TV. Thoughtful Catholic Christians, who expect to be mocked and treated with contempt by the world, pray for the souls of blasphemers.

Thanks to his stagecraft, Donohue is now being compared to imams who issue fatwas against those who insult Islam. While the two share similarities in superficial ways, they are worlds apart in important ways.

Obviously, the common thread is religious sensitivity. Muslims and Catholics alike want their religious beliefs respected and are angered when non-believers ridicule them. Catholics have been under siege by the secular culture for years, confronted with everything from rock star Madonna's antics to "Piss Christ" to a Virgin Mary painting adorned with elephant feces.

All were intended to provoke -- gratuitously.

The Danish cartoon controversy that outraged Muslims, while provocative, was in essence an act of protest aimed not at taunting but at exposing the corruption of Islam by those who dress up murderousness in religious garb.

It was in direct response, in fact, to Muslim intimidation. At the time, Danes were so intimidated by Muslims following the murder in Amsterdam of film director Theo van Gogh that no one was willing to illustrate a children's book about Islam.

Say what you will about Donohue, but he's too cagey to issue death threats. Who needs bombs when you've got the media? Otherwise, he picks his battles strategically.

In this case, he didn't even go after the artist. He knows that free expression trumps outrage in America. But he also knows that money trumps everything, and so he went after the hotel. The result may feel like censorship, but playing the free market beats a beheading every time.

There is also a vast gulf between random threats from random people identifying themselves as Catholics and Muslim anarchists who act with the blessings of the state. Donohue may have a following among his brethren, but he doesn't have the backing of the U.S. government.

Both Iran and Syria, by contrast, are believed to have helped organize protests following the cartoon blowup, and at least one Indian government minister offered a cash reward for the head of a cartoonist.

Donohue may get a little red-faced, but he manages to make his case without burning down embassies, as Muslims did in Syria. And, let's face it, no one seriously fears that American Catholics are going to take down the Sears Tower with passenger planes, shouting: ``Hail Mary, full of grace!''

Even so, it would be nice if religious Westerners would stop handing ammunition to the enemy -- not just to those who offend them, but also to the radical Islamists whose insanity is minimized by the inevitable comparison.

Those who taunt true believers, meanwhile, are like children trying to get a rise out of Daddy. A mature father knows to ignore the brats.

And the God of Abraham, Isaac and Jacob probably doesn't get his feelings hurt over a chocolate nose-thumbing.