Hillary's Once in a Lifetime 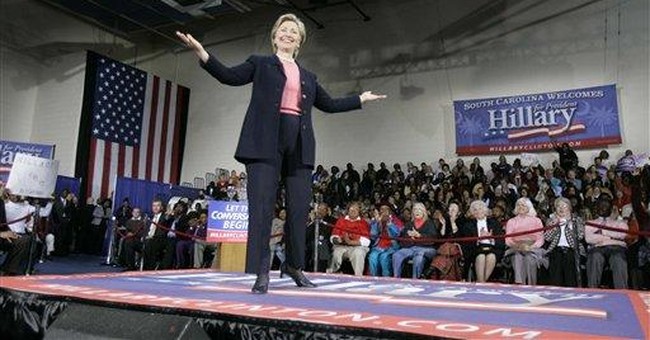 "Once in a Lifetime," by Anthony Newley / Leslie Bricusse

But standing there center stage, surrounded by queens (the kind who wear tiaras), she looked like Miss Queen of the Universe greeting her court.

For this was her moment, her once in a lifetime. Hillary was in Columbia Monday on the first stop of her first South Carolina tour since declaring her candidacy for president. The smallish auditorium at Allen University, one of two side-by-side, historically black colleges here, was filled to overflowing.

The line waiting to get inside stretched down the block, while inside a drum corps and the Allen University Chorale entertained those lucky enough to grab seats.

After an hour of pre-game warmup, I wanted to shave my head. Finally, Hillary swept in and moved down a line of huggers toward a raised platform centered in the room.

Her positioning meant that she had to keep turning in order to hug back. Around and around and around she turned, 360 degrees, over and over, her arms outstretched in perpetual greeting, like a jewel-box ballerina whose battery has run low.

This wasn't Hillary's first visit to South Carolina, she told the crowd. She had been here a lonnnnng time ago, back when she was a lawyer for the Children's Defense Fund, working for the poor, the underprivileged and the downtrodden.

She left it at that. No one in the crowd seemed to notice or care that the New York senator has been to South Carolina lots of times, hanging out where the poor and underprivileged seldom gather except as maids, gardeners and servers.

She and husband Bill have been high-profile regulars at the elite group hug known as Renaissance Weekend -- at Hilton Head (and recently Charleston) -- since waaaaaaaay back when Bill was a governor and Hillary was a lawyer-wife.

Hillary is nothing if not selective. She strategically invoked several long-agos and way-back-whens throughout her speech, determined, it seemed, to remind people that she is the elder statesman in this bunch -- unlike that puppy, Barack Obama, who wowed crowds here last week.

At one point, she borrowed from her Brownie/Girl Scout days. At another, she recalled the days of Sputnik -- the unmanned space mission launched in 1957 by the Soviet Union.

Obama may be all that, but he wasn't around for Sputnik. Hillary remembered that teachers came to classrooms and told children: ``The president wants you to learn math, and we believed it. What are we asking our children to do?''

In another time-travel moment, she hearkened back to those wacky missile crisis days when baby boomers played "dive and hide." We avoided that crisis, how? By talking to our enemies. Unlike you-know-who.

Hey, didja know they have farms in New York, y'all? Well, yessiree-Bob, Clinton told the crowd by way of introducing her ag bona fides. And, yes, she did say "y'all," which you don't hear much in Chappaqua.

And South Carolina has soybeans! The straight-A student had done her homework. She knew all about the state she was visiting and managed to weave soybeans into her agenda for more jobs and alternative energy sources.

Hillary also knew some of the most arcane factoids possibly ever delivered on a campaign trail.

Talking about her education agenda, she dropped this nugget: The average college graduate makes $1 million more than the average high school graduate. We get the point. Go to college and you'll make more money than a high school grad. Check.

Trickier was this one: Last year there were more bankruptcies in the U.S. than college graduates. Hmmmm. What could this mean? If you go to college, you will or won't go bankrupt? I'm not sure, since most of my bankrupt friends have Ph.D.s in economics.

Never mind. The crowd didn't care. They loved Hillary and she loved them. Flanked by Miss Benedict College and Miss Allen University, she was missing only the crown that has long been her due.

Her special moment, her once in a lifetime.