Will You Be My Vagina-tine? 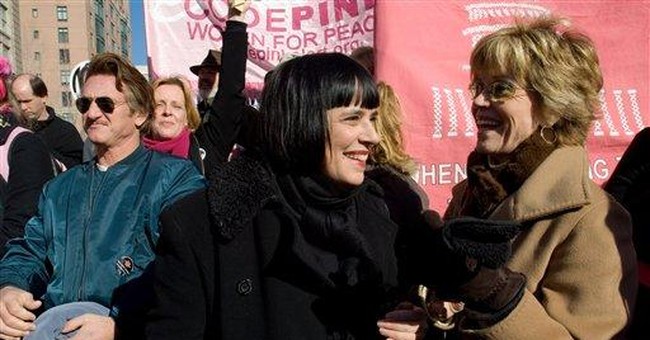 WASHINGTON -- In the scheme of things, how and whether people celebrate Valentine's Day doesn't usually qualify as one of the world's more pressing concerns.

We're at war, after all. Who cares whether men and women find each other in a romantic clutch on a day already corrupted by ceaseless commercialism?

But Valentine's Day does matter because, no longer a holiday of hearts and flowers, it has become a feminist political vehicle in the gender wars. Think armada.

Usurped in 1998 by Eve Ensler and her vagina warriors -- conscripts to Ensler's blockbuster play ``The Vagina Monologues'' -- Feb. 14 is now called ``V-Day.'' That stands for violence, victory and vaginas -- not exactly a compelling prompt to uncork the Veuve Clicquot.

Ensler's V-Day, unlike the lowly valentine, isn't a small gesture. It is an institution on many college campuses, a global movement and a multimillion-dollar industry aimed, at least initially, at stopping violence against women and girls.

No one can argue against such a noble cause, even if it does mean pretending that talking publicly about one's privates is a sign of intellectual vigor. But let's be honest as long as we're being open: The subtext of the monologues is implicitly anti-male -- misandrist messages pimped as high art.

For anyone left on the planet who doesn't know what the monologues are, they're a series of soliloquies in which characters wax indelicately about their delicates. Subjects include rape, incest, domestic battery, genital mutilation, lesbianism and, shall we say, self-discovery.

One can read Ensler's book in about two cups of coffee -- or two stiff drinks, if women rhapsodizing about their inner sanctum isn't your cuppa tea.

It can't be denied that Ensler hit the G-spot when she conceived of her one-woman play. Apparently, women around the globe were amazed and delighted to learn that other people had one, too!

Ensler has gotten rich and, to her credit, has raised more than $30 million to help oppressed and abused women, especially those in other countries where golf club memberships haven't yet risen to the level of a human rights issue.

Today the monologues are performed in dozens of countries and on hundreds of college campuses, with attendant smaller dramas that range from the silly to the obscene. Ubiquitous on participating campuses are orgasm workshops, sex toy parties, V-shaped lollipops and the occasional supersized dirigible.

Not to be a spoilsport, but it's not as though vaginas have only suddenly come to mankind's attention. And the Big O, though universally regarded with awe, is not advanced physics.

Nevertheless, Ensler has been able to recruit scores of self-regarding sophisticates and celebrities to join in her male-bashing fest, while all but the innocent nod and applaud as though these rants of dysfunction were paths to enlightenment.

At least the celebs who queue up to give voice to Ensler's demons are fully adults. More insidious is the V-invasion of campuses where young women absorb and parrot the ideology of man's badness.

In such an overtly hostile environment, it's little wonder that men have turned to playmates of the pixelated variety and that doctors report a rise in impotence among college males.

It would be delightful to ignore the monologues, but at a time when even the very personal is political -- and sex drives politics, policy and whole economies -- vagina-ism is as innocuous as a virus.

Ensler and disciples, indeed, have recently focused their sights on more ambitious goals.

Last month, V-warriors merged with anti-warriors in the peace march on Washington, where Ensler joined such anti-war luminaries as Jane Fonda and Susan Sarandon. Clarifying her agenda, Ensler said in a statement:

``We are saying that if a government supports the use of force, weapons, violence as a method of control and dominance, this models and gives license to the same kind of behavior at home.''

Deconstructing Ensler's free-associative proclamation, we see that using force in war to control and dominate the enemy leads inevitably to patriarchal violence against women at home. That's quite a leap of logic.

If Western civilization has been dominated thus far by a phallocentric patriarchy, it would seem we're heading ineluctably toward domination by a vagina-obsessed matriarchy.

Whether peace will reign upon the Earth remains to be seen. But if I were a male of the species, I'd consider manning the barricades.

And by all means, guard your weapons.