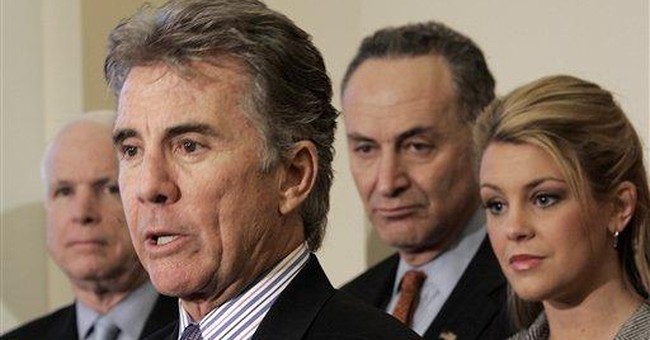 Another day. Another blip. America shrugs.

I don't much care what adults do on their own time in their own space. But everyone -- especially children -- has a right not to see. Not to know.

Images of two (or three or four) overendowed adults consorting like a troop of deranged baboons is frightful to a child -- at least until he gets used to it -- and that's putting it mildly. Most of what's available online, some of which is pathological, makes jungle romance seem dignified.

We're not talking about incontinence here, but adults who like to dress and act like babies, including wearing diapers. Not all are sexual -- babies don't have sex after all -- but one thing leads to another on the Net. Where there are men in diapers, there are women to nurse them.

One question was whether we should restrict children's access to XXX-rated material. Post-porn, the number of people answering "yes" was reduced by half.

Children can't fare better. Never mind the visual impact of porn's genital inventories, but what are children to glean about grown-up relationships from watching men and women reduce each other to objects and orifices?

Not much that will be useful to them as they try to navigate intimacy with a real human being someday.

And, if we had any sense, what a crime.