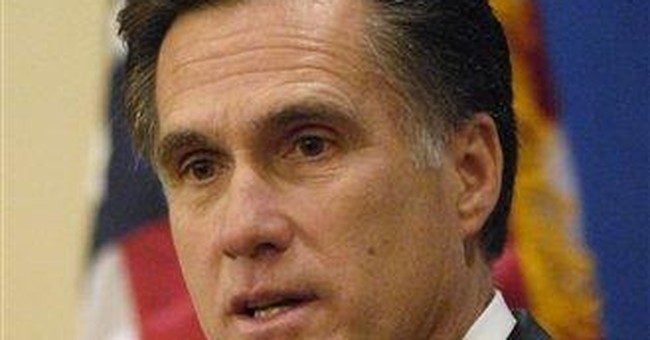 In a world wary of flip-floppery, it is nearly impossible for a politician to change his mind without appearing unprincipled.

Just ask John Kerry. Up front, I admit to enjoying a flip-flop moment now and again. Kerry made it too easy, with so many flip-flops that CBS News posted a ``Top Ten'' list during the 2004 presidential race. Famously, Kerry said: ``I actually did vote for the $87 billion before I voted against it,'' referring to supplemental funding for the war in Iraq. The flip-flop slogan stuck to Kerry like Spandex because he couldn't stop contradicting himself.

Now the flip-flop has landed at the feet of Republican Mitt Romney, who is being compared to Kerry. Romney, you see, was pro-choice before he was pro-life.

A YouTube video shows Romney during a 1994 debate with Sen. Ted Kennedy in which he supports abortion and gay rights. After being elected governor of Massachusetts in 2002, Romney opposed same-sex marriage and became a pro-life champion, notably by opposing cloning and embryo farming.

The debate, at least as edited for YouTube, is painful to watch if only because Romney seems so sure of himself and, yes, eager to please. A grayer Romney today displays equal certitude, even as he seems to reverse himself.

Did Romney change his tune for political gain? Or did he risk his political future by changing his mind?

In fact, Romney has never supported same-sex marriage, which wasn't even on the table in 1994 when he said he supported ``full equality'' for gays. In the context of the times, equality generally meant protecting gays from overt hostilities. The Massachusetts Supreme Judicial Court ruling to allow same-sex marriage wasn't until Nov. 18, 2003.

On life issues, Romney isn't the first person to change his mind after closer scrutiny. Technological advances have forever changed the abortion debate, allowing us to see what we weren't able to see before and making ethical decisions all the more challenging. Knowledge may be power, but it's also a pain in the neck sometimes.

Embryonic stem cell research, on the other hand, is so abstract and complex that most Americans probably can't explain what it is exactly. They just know that pro-lifers, generally associated with the religious right, are against it; and Michael J. Fox is for it.

In a popularity contest, Fox wins over Falwell.

Romney found the stem cell debate so complicated that he called in the nation's top scientists for a private tutorial. What many Americans may not know about Romney is that he's a nerd. A Harvard-educated wonk, he's the kind of guy whose class notes you could borrow (if he'd let you) and know that you got the whole story.

After studying the data, Romney decided that life begins at conception. Explaining his position on cloning in a March 2005 opinion piece for The Boston Globe, he wrote:

``Once cloning occurs, a human life is set in motion. Calling this process `somatic cell nuclear transfer,' or conveniently dismissing the embryo as a mere `clump of cells,' cannot disguise the reality of what occurs.''

From that position, all other life decisions flow. If you believe that life begins when an embryo forms, then you can no longer support abortion or research that destroys embryos.

There now, that wasn't so bad. All of which is to say that Romney did the nerd-wonk thing: he studied, he listened, he changed his mind.

Unfortunately, the flip-flop factor has shifted focus from other issues of greater concern both to Romney and most Americans, including the war in Iraq and terrorism. You have to be not dead before you can enjoy the luxury of defining life.