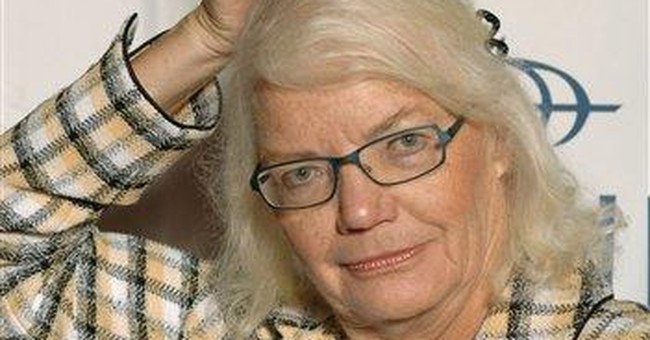 This column was supposed to have been a "Get Well" valentine to Molly Ivins. That was the plan.

But cancer hates plans, and so instead I have come to praise one of my favorite columnists, who has left this world too soon.

Ivins, the syndicated writer beloved by liberals and despised by conservatives (at least most of them), died Wednesday after a seven-year battle with breast cancer. Her parting words to readers: "Raise hell."

I have no special claim to grief when it comes to Ivins. I'm just one of millions who loved reading her. As I said in an e-mail to her a few days ago, which I'm guessing she never saw, I've been a fan as long as I can remember.

She was funny, irreverent and smart. It didn't matter that she was often wrong, in my view. What mattered was that she was good.

As fellow syndicated columnists in many of the same papers, Ivins and I were often placed opposite each other. Which meant, among other things, that we had many of the same readers, and mostly different fans.

Ivins' fans took pleasure in telling me I should read Ivins before I died of chronic stupidity; her un-fans wrote to say they read me as an antidote to that Ivins woman. My favorite letters came from readers who said they liked us both the best, even though we were both wrong most of the time.

I know what they meant. My favorite columnists are not those with whom I necessarily agree, but those who keep me awake, those who write beautifully, and especially those who make me laugh.

Molly made me laugh.

I admired her style, wit, passion and smarts. As a fellow toiler in the field, I appreciated her doggedness in pursuit of our craft and the skill of her execution.

It ain't always as easy as it looks.

But the thing I loved best about Molly Ivins is that she was a great broad, one of the few remaining in our vapid Paris Hilton world.

You don't hear that word much anymore -- "broad." It went out the door with "lady" and is considered derogatory by younger generations.

But to the World War II crowd, and to some of us who were raised by them, a great broad was more than a mere woman. The best compliment my father could pay a woman was to say, "She is one great broad."

Those five words were the equivalent of a kiss blown across the room, a cape tossed over a puddle, a bow to an intelligence at least equal to one's own. It did not mean "hot," as everyone seems to say these days about an attractive female.

A great broad might be "hot," -- there's no rule against it -- but that's the least of her charms. The physical, as Ivins knew as well as anyone, is fleeting.

A great broad is everlasting, a presence, a force, a woman of substance -- solid, intelligent, humorous, sexy and full of "it." Reliable, strong, confident and competent, she walks into a room and causes a stir. The air shifts and heads turn. Who's that?

At six feet, Ivins was impossible to ignore. She commanded a room just as she commanded op-ed pages for millions of readers who found pleasure and inspiration in her words.

Of late, those words had been focused primarily on the Iraq War, which she insisted had to stop. In her next-to-last column, she said she would be devoting all of her columns to ending the war. She wrote only one more, urging Americans to raise hell against the surge.

A happy enemy of the powerful, Ivins saved her sharpest barbs for President Bush, whom she dubbed "Shrub" when he ran for Texas governor against Ivins' good friend Ann Richards, who also died recently of cancer.

Despite their public animus, I suspect even George W. Bush harbored an uncertain fondness for Ivins. For one thing, enemies need each other. For another, Ivins was his type of gal -- full of spunk and vinegar, but also big-hearted and true. Even when she was wrong.

In a world short on class acts, Ivins was a star -- and the marketplace of ideas will be poorer without her.

She was one great columnist.

And one great broad.