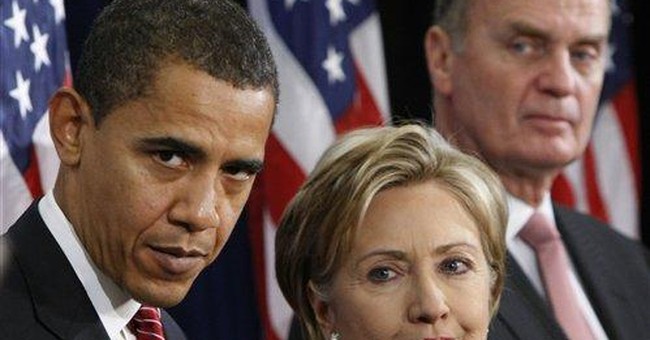 Feminists were devastated by Senator Barack Obama’s final Cabinet selections. Although Obama has not reversed any of his policy positions, he has committed a major crime in their eyes. He selected five women for his twenty Cabinet positions. This is not enough for them. That he chose one-fourth of his Cabinet positions to be filled by women instead of one-half is the problem.

Kim Gandy, President of the National Organization for Women (NOW), is not happy. In a December 22nd CNN article she said, “When you are looking at a Cabinet and you have such a small number of women in the room when the big decisions are being made, there need to be a lot more women's voices in this administration.”

Amy Siskind, who recently co-founded the feminist group New Agenda, claims in the same article that Obama is taking “shocking steps backward” in not selecting more women and that “this constituency does not matter to the president-elect.”

Since women compose over half of the electorate and the U.S. population, the claim that women should make up half of the Cabinet does not seem so far-fetched. Yet, it does seem ridiculous when compared with earlier positions feminists have taken in this election. Regardless of the arguments for and against women making up half of Obama’s Cabinet, this feminist complaint reveals a deep tension within feminism today by raising a question: Does American feminism seek to achieve sex parity or policy representation?

The same day Senator John McCain announced his selection of Governor Sarah Palin for Vice President, NOW issued a press release entitled, “Not Every Woman Supports Women’s Rights.” The press release announced that NOW opposed Palin, “The fact that Palin is a mother of five who has a 4-month-old baby, a woman who is juggling work and family responsibilities, will speak to many women. But will Palin speak FOR women? Based on her record and her stated positions, the answer is clearly No.”

NOW publicly opposed Palin because her positions supposedly did not speak for women, and endorsed Senator Joe Biden because he “…is the VP candidate who appeals to women, with his authorship and championing of landmark domestic violence legislation, support for pay equity, and advocacy for women around the world.” The press release flatly denied that NOW supports women candidates solely because they are women.

NOW’s position on Palin’s nomination implies that NOW supports candidates based on whether they “speak for women” and represent feminist policy positions, regardless of sex. Yet, the feminist critique of Obama’s Cabinet based totally on the sex of his nominees contradicts this position and advances sex parity. As Obama announced his final Cabinet picks, feminist groups quickly dropped the rhetoric of wanting candidates “who speak for women” in support of sex quotas. They want ten women in Obama’s Cabinet. With the exception of the selection of Lawrence Summers, these liberal women’s groups criticize Obama’s nominees just because they are men, not because of their policy positions. Policy agreement is not enough.

Having lost the Cabinet battle, NOW and the Feminist Majority wrote a letter to Obama asking him to create a Cabinet-level White House Office on Women, and twenty other women’s organizations have signed a petition calling on Obama to create a Presidential Commission on Women.