Is America Only for White People? 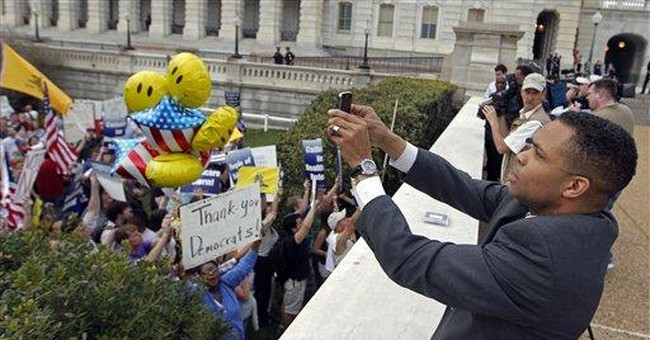 Is America only for white people? The question stuck in my mind following yet another e-mail exchange with a friend of mine, regarding my conservatism. For this particular gentleman, being black in America is at odds with conservatism. As he put it:

“…Particularly as African-Americans, I feel we are in no real position to idealize the American experience and get too choked up about institutions and symbols that were not created with us in mind. Certainly, we cannot cast our lot with those who are actively seeking to destroy those gains we have made.”

I have a number of issues with the above statement, not the least of which is that the principles that inspired the American founding were always viewed as universal principles, which applied to all of mankind. Curiously, it wasn’t until the introduction of Historicist and Darwinian philosophy (which gave birth to Progressivism) that some Americans began to argue otherwise. And of course, I disagree that conservatives are actively seeking to destroy all of the gains black America has made.

It is important to note that the sentiments that my friend expresses are similar to the political attitudes which continue to permeate much of the black community. These same attitudes are also particularly present in the thinking of the black leftists, who have long held the conviction that the existence of slavery at our nation’s founding renders our Constitution a hollow document; the institutions and symbols that sprang from the founding were bereft of moral authority; the founders were hypocrites and liars, and the American dream is little more than a cruel myth.

From this conviction a kind of “cultural revolutionary defiance” has arisen, that is to say: black authenticity began to be increasingly measured by the degree to which black people defined themselves by way of their ethnicity, expressed anger at historical injuries, and were critical of, or rejected American symbols and institutions.

In this respect, my friend is a true new-revolutionary. But the issue he raises is not a new one, neither is it exclusive to American blacks.

In July of 1858, Abraham Lincoln addressed the question of how almost half of the citizens of this country could take pride and ownership in the accomplishments of the nation when they were not “historically related” to the founders, or those living on these shores at the time of the founding. Lincoln answered: “If they look back through this history to trace their connection with those days by blood, they find they have none, they cannot carry themselves back into that glorious epoch and make themselves feel that they are part of us, but when they look through that old Declaration of Independence they find that those old men say that ‘We hold these truths to be self-evident, that all men are created equal,’ and then they feel that that moral sentiment taught in that day evidences their relation to those men, that it is the father of all moral principle in them, and that they have a right to claim it as though they were blood of the blood, and flesh of the flesh of the men who wrote that Declaration, and so they are. That is the electric cord in that Declaration that links the hearts of patriotic and liberty-loving men together--that will link those patriotic hearts as long as the love of freedom exists in the minds of men throughout the world."

The essential element that my friend and the black leftists have missed is that what binds us together as Americans is not shared blood, race, ethnicity, or tribe; it is the unshakable belief in certain universal principles. The American experience is not attached to men who were flawed, but is instead fixed to ideas that remain flawless. The institutions and symbols of America are reflective of the revolutionary idea that all men are the property of God, created with an equal right to life, liberty, private property, and the free pursuit of bettering their station in life. Martin Luther King, Jr., put it more succinctly: “The American dream reminds us…that every man is an heir of the legacy of dignity and worth.”

All of us, whether our ancestors arrived through the gates of Ellis Island or survived travel through the Middle Passage are heirs to that grand idea. It is this idea that animates true conservatism and moreover, it is ONLY that idea—those principles—that made possible the huge gains that black Americans have made in this country and indeed in the world. It is, perhaps, also the reason that more Africans have freely chosen to come to America than were ever imported in slave ships.

These forward-thinking paragons, nursed on the mother’s-milk of Marx and Mao, would build their new America on the bedrock of economic redistribution and racial favoritism. I believe we tried that once in this country…