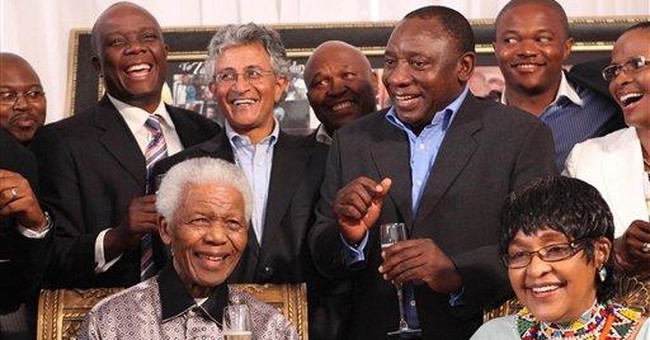 Appearing on television and radio is good for my career. Every time I show up in the media it sells books and further legitimizes me as a cultural and political commentator and answers a question that, alas, has been asked far too frequently of late: “Whatever happened to…”

Last week I canceled an appearance at the last minute in order to attend my youngest son’s gymnastics tournament and I wouldn’t have missed it for the world. I had originally planned to miss the tournament. I explained to my son that “Daddy had to work.” He was disappointed, but he understood. Early in the morning I changed my mind and I am glad I did.

During the team competition the top three teams battled back and forth through all six events. My son’s team was in second place going into the final round and spirits were high as the high-bar was our team’s best event and my son was the team’s strongest high-bar competitor.

My son went last. He looked good; toes pointed-legs straight, lots of height and then he stumbled. My son missed an element – an element he can do in his sleep. He finished with a decent score, but much lower than normal.

Anyone that has watched a televised Olympic gymnastics competition can tell you that a step on the landing results in a one tenth of a point deduction. That afternoon the difference between the first place team and the third was one tenth of a point; literally one step. There was a tie for first place between our team and a team from Redondo Beach. The other team won the tie breaker and our boys took their place on the second step of the podium.

Afterwards I gave my son a huge hug; he had performed well all day. He fell into my arms in tears. To his young (and competitive) mind the difference between his team taking first and finishing in second place was the missed element in his routine.

My heart broke for my son. It wasn’t the first time and it won’t be the last. I have three sons and have wiped many tears over the years – some of them my own. Disappointment is part of life and salving the wounds of disappointment is part of a parents’ job description. Call it the bittersweet experience of parenthood; bitter because the tears we kiss away are always salty; sweet because these moments flavor our lives forever; they remain with us as parents and are part of the glue of trust that bonds our children to us.

I held my son as tightly as I could. I kissed his face and wiped away his tears. I whispered to him over and over again how proud I was of him--how proud his mother was of him. It had been a long weekend; he was emotionally and physically tired. I wanted to hold him up. I thought that if I held him tightly enough he might understand how deeply and utterly in love with him I am and that would make everything better.

I was recently asked to contribute some thoughts to a book aimed at young women aspiring to have it all: career, family and marriage. “What would you tell your daughters?” was how it was put to me. As it happens I don’t have any daughters; I have 3 sons and what I tell them is the same thing I would tell them if they were girls; it is the same thing I learned last week. Professional success is important; it can do wonders for our self-esteem to say nothing of our bank accounts. It provides us with status, luxury and comfort. None of these are bad things. However, at the end of the day life is about relationships. Never miss the opportunity to wipe away your child’s tears, or hug them in celebration. If you miss the opportunity to laugh with your best girlfriend until your sides hurt; make love to your spouse late into the night, sip tea with your grandmother; listen to your fathers old stories or any number of other wonderful moments because you are chasing professional success you will have missed a great deal. More importantly you will have missed the point. At the end of our journey on this side of the darkness neither our children nor anyone else will care about our degrees, awards or how much money we saved the company. Everyone will, however, remember the warmth of our hugs, the tenderness of our kiss and the spirit of our laughter.