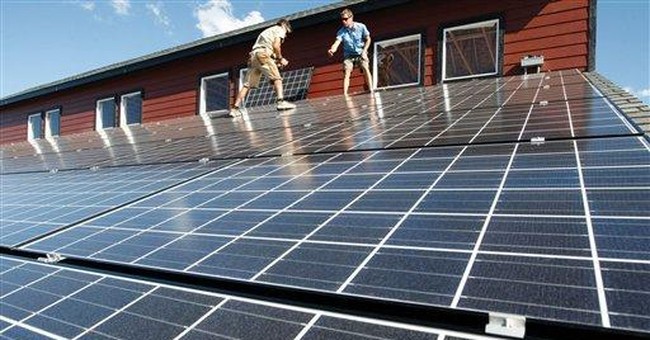 An Associated Press story last week related "good news" about expected heating costs this winter: namely, it will cost people less to heat their homes this year, according to the Energy Information Administration. To read the story, one would think that the government considers that to be good news, too.

Under a cap-and-trade regime, however, this same news would be considered calamitous. By the government, that is – consumers would, of course, remain consistent in their opinion that higher energy costs are bad news and lower costs, good. Making energy more expensive is what the whole cap-and-trade scheme depends on.

The House legislation known as cap-and-trade, HR 2454 (Waxman-Markey), is intended to limit (cap) greenhouse-gas emissions in the United States, including especially carbon dioxide (CO2) emissions, starting in 2012. The cap would be set initially at a level 3 percent lower than U.S. emissions in 2005 and would tighten by 2050 to be at 83 percent lower than 2005 emissions.

It is important to understand that emissions are a byproduct of energy production, especially from fossil fuels, and 85 percent of U.S. energy is from fossil fuels. The cap would begin by restricting energy production until it is forced into so-called "green" energy alternatives (which never include emissions-free but maddeningly efficient nuclear power) — alternatives that are far too inefficient to work without government forcing people onto them.

By effectively limiting energy production and forcing new production to come from new, highly inefficient sources, the legislation would greatly increase the cost of electricity on everyone: the working poor, families struggling on the cusp of poverty, college students, elderly on fixed incomes, small businesses, everybody.

Think of every subgroup of people that has ever been held forth by the Democrats for universal sympathy as a substitute for an argument in favor of some piece of legislation. Think of every time the Democrats have ever said we must pass such-and-such bill because it would help this group of people and hey, the only conceivable reason someone wouldn't support this bill is if he hates those people. Well, of all those groups, every last one of them would be harmed by cap-and-trade. On purpose.

The ripple effects — the trickle-up misery — of the government deliberately raising the cost of energy in this country is hard to imagine even during a steep recession. According to Heritage Foundation research, it would reduce aggregate GDP by $9.4 trillion by 2035, kill about 1.15 million jobs per year, cause a 90-percent spike in electricity rates (adjusted for inflation), add to the federal debt nearly $30,000 per person (adjusted for inflation), and cause the average family's annual energy bill to jump by over $1,200 (inflation-adjusted).

The Heritage Foundation might even be sunshine optimists in their estimation. A Freedom of Information Act request by Christopher C. Horner at the Competitive Enterprise Institute resulted (eventually) in the public knowledge that the U.S. Treasury Dept. has estimated the total in new taxes under cap-and-trade would be between $100- to $200-billion per year, meaning the cost per American household would be over $1,700 per year.

Still, it's never enough to favor or oppose legislation based on looking at one side of the ledger sheet. Who would benefit under a cap-and-trade scheme as envisioned in Waxman-Markey?

One group that has already benefited has been swing-vote congressmen and their friends. The week that it passed the House, $130,000's worth of PAC donations were made to 41 swing Democrats, and where campaign donations weren't enough to do the trick, pork-barrel politicking was (a New York Times headline put it this way: "With Something for Everyone, Climate Bill Passed").

If the bill were to become law, then benefactors would also include the ever-growing list of favored businesses that would be granted free carbon allowances. Along with the arbitrary caps the government would place on emissions would be emissions permits, or allowances, that the government would institute. Allowances signify how much carbon a business could legally emit. With emissions capped, there would be only so many allowances available, and they would be valuable commodities that "cleaner and greener" businesses could sell to "still-polluting" firms (this is the "trade" portion of cap-and-trade). How to distribute those allowances initially would be very important; the Obama administration wants them auctioned off, whereas the House leadership found it necessary for the bill's passage to promise giveaways of allowances to firms in key representatives' districts.

The market for those allowances would be staggering; by some estimates, in five years it would become the largest commodities market in the world. Even White House budget director Peter Orszag said the prospect of giving firm the allowances for free "would represent the largest corporate welfare program that has ever been enacted in the history of the United States."

It follows, then, that other benefactors would be those involved in the newly created "carbon market" — energy companies, commodities brokers, government bureaucrats, and speculators. The bureaucrats would gain also from the many new government jobs needed for information gathering, a National Greenhouse Gas Registry, and the like. Corporate compliance officers would also find their services in more demand to help firms manage the even thornier red-tape jungle.

Domestic firms would benefit from embedded protectionist measures ostensibly to prevent "leakage," by which is meant imports produced by foreign firms untouched by emissions strictures or international firms moving jobs out of the U.S. in order to avoid them. The bill recognizes that it would impose such a massive cost on production that it would, if outside competitors didn't also have to bear it, cripple U.S. industry, so the answer is to institute an "Emission Allowance Rebate Program" for domestic firms and allow the president to require importers to show proof of carbon offsets or emissions allowances (which would amount to a tariff).

Carbon offsets, by the way, would be another way that firms who emit more than their "fair share" could legally continue to do so — they would have to purchase carbon offsets from landscapers and tree planters (everyone knows shrubs and trees scrub the environment of carbon pollution). Forestry interests would thereby be other significant benefactors of Waxman-Markey.

Labor unions would benefit from the bill's requirements of contractors and subcontractors to be subject to the Davis-Bacon Act of 1931, especially the "prevailing wage" portion that so effectively prices out small and minority-owned businesses. And anyone with a project that can wrangle it a designation as a "Green Construction Careers Demonstration Project" would rest assured in the knowledge that the government would see to it the project would not fail. There is also a highly specific list of "targeted workers" for green construction projects who would also benefit, a few examples of which include child welfare recipients, residents in a community empowerment zone, residents in an area in which at least one-fifth of households during the past two years never exceeded 200 percent of the federal poverty guidelines, and displaced homemakers.

Finally, certain industries would benefit as well, including such pre-Industrial Revolution powerhouses as leather and allied goods, bags, paper, all kinds of publishing (newspapers, periodicals, books), and cutlery and hand tools.

Benefits to the planet itself — remember the ostensible reason for such a gargantuan program that only incidentally would raise over $1,700 in new taxes per American household? — are entirely theoretical. Apparently some estimates are that by 2050 the planet would be some very small fraction of a degree Celsius cooler-than-projected-warming (which means still warmer, but by a smidge less). Meanwhile, other, poorer nations will continue to chase after energy generation because it is so important to growing economies, lifting living standards, and in general improving life and the enjoyment thereof. China's rate of growth in its energy production is such that within another two decades its emissions level would equal that of the entire world's right now.

Again, weighing the full costs and benefits of proposed legislation is what responsible citizens do. Cap-and-trade's costs may be significant, but don't forget its benefits include increasing government corruption, growing bureaucracy, promoting pork-barrel politics, exploiting the poor, and empowering labor unions. Add to that freedom from the fear that winter heating costs might fall again as they did in 2009-10, and the true worth of the idea should become evident to all.