When Democrats Attack Your Patriotism 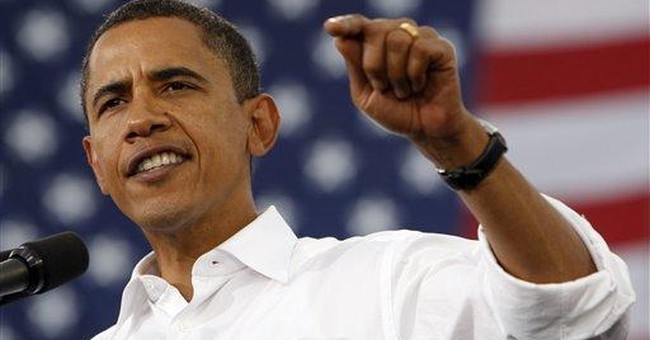 Such a "country first" message resounded then, during the height of the Cold War, and it still echoes in civics classrooms across the nation. Meanwhile, the candidate looking to become the next revered Democrat president has been traveling the country sneering at the technological shortfalls of one who answered then what he could do for his country and entreating his Americans fellow to ask, beg, organize and demand what their country under him could do for their groups.

That is one reason why Sen. Barack Obama needed an older, more experienced Democrat as his running mate: to try to smooth over the jarring incongruity between the Democratic Party during Kennedy's day and the unabashedly socialistic party of today trying to bargain away individual freedom on the basis of group privileges and favors. Biden recognized that the "ask what you can do for your country" part was being neglected while the Obama/Biden ticket was so enthusiastically overturning that inconvenient "ask not" part.

Kennedy's "ask" was open-ended, requiring an answer within each individual, befitting the times. Biden and the Democrats of today operate from the assumption that people today are too deplorably stupid to know what's best for them — they buy the wrong cars, make the wrong energy choices, buy the wrong light bulbs, put their groceries in the wrong bags, don't know what amount of health insurance is proper and certainly don't know that socialized healthcare would cut that Gordian knot of individual decision-making altogether!

So Biden magnanimously answers Kennedy's question for them. He dubs paying taxes "patriotic." He did this on ABC's "Good Morning, America," saying that while Obama would increase taxes on the wealthy, "It's time to be patriotic." And has said it in it political rallies, telling a woman who said her friends are worried that under Obama they faced a tax increase, that she should say to them: "It's time to be patriotic."

So under Obama/Biden, Americans would demand what our country can do for our groups, and ask not what we can do for our country, because they'll tell us: pay more taxes. That's it. It's "time to be patriotic." (It's consistent in a perverse way: they can't "do for us" until they've taken from us, but hey, they'll take more from "them" so it's change you can believe in and stuff.)

Now this is a very strange definition of patriotism. True patriotism is not something that is demanded or coerced with the implicit threat of violence the way taxes are. Nations that demand acts of patriotism tend to be dictatorships. They also tend to be run by socialist blowhards, but that must be mere coincidence.

Biden is not discussing, after all, people giving more than they are required by way of taxation. He is most definitely talking about the government forcing people to pay more taxes, slapping it with the euphemism of patriotism.

Democrats are usually all about praising "dissent," but when someone dissents about paying higher taxes, they become fire-breathing jingoists of the first order.

Well, if it's "patriotism" to be quiet and allow the government to take even more of your family's livelihood and not even avail yourself of all the civic tools to fight a tax increase peacefully, would Biden consider a mugging "charitable giving"? If his home were burglarized, would Obama sigh gratefully that at last he's "given to the least of these my brethren"? Just how far would they go to redefine forceful taking as the cause of voluntary giving?

To return to Kennedy's inaugural address: his next phrase less well known. "My fellow citizens of the world: ask not what America will do for you, but what together we can do for the freedom of man." That portion refers back to comments at the beginning of the speech, where Kennedy spoke of the "revolutionary beliefs for which our forebears fought ... the belief that the rights of man come not from the generosity of the state, but from the hand of God.    We dare not forget today that we are the heirs of that first revolution."

Kennedy concluded in words that today would set the media hounds baying day and night about inferred religious extremism: "Finally, whether you are citizens of America or citizens of the world, ask of us the same high standards of strength and sacrifice which we ask of you. With a good conscience our only sure reward, with history the final judge of our deeds, let us go forth to lead the land we love, asking His blessing and His help, but knowing that here on earth God's work must truly be our own."

But politicians don't go seeking God's blessing and help when they don't believe that the rights of man come from the hand of God as opposed to the generosity of the state.