Unfortunately for D.C., there are no condoms for guns 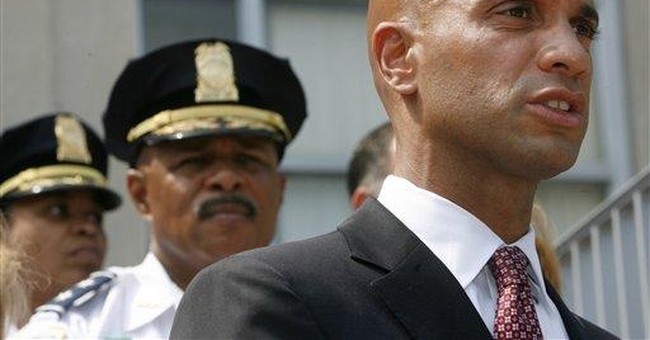 The city of Washington, D.C., wants the Supreme Court to reverse an appeals court's decision to overturn its ban on private ownership of handguns. That pesky Second Amendment is involved. It's too bad D.C. doesn't approach the problem of its citizens being harmed by gun violence (even though guns are banned) the way it does the problem of citizens being harmed by contracting HIV.

First, about the gun ban. In March, a three-judge panel of the U.S. Court of Appeals for the D.C. Circuit, citing the Second Amendment, ruled 2-1 against the city's ban, which allowed only active and retired law enforcement officers to own handguns, and it also frowned upon the city's law mandating trigger locks or disassembly of rifles and shotguns in private homes.

In appealing to the Supreme Court, District Attorney General Linda Singer called the city's ban "eminently reasonable" and stated, "Whatever right the Second Amendment guarantees, it does not require the District to stand by while its citizens die."

Mayor Adrian M. Fenty (D) declared, "The only possible outcome of more handguns in the home is more violence." Obviously the mayor and the city's leadership equate the presence of a handgun with an irresistible urge to use it.

Speaking of irresistible urges, D.C. isn't standing by while its citizens contract HIV, either, although its approach is entirely different. The district seeks to protect citizens from death via gun by banning or disabling guns. Delicacy prevents making the analogy explicit, but the tactic adopted by the city to protect citizens from death via sexually transmitted disease is to give away free condoms.

The free condoms are imported from China, emblazoned with the municipally sanctioned double entendre "Coming Together to Stop HIV in D.C." and offered in bowls displayed in laundromats, restaurants, and other locations. Rather than a cumbersome and unenforceable ban on unsafe behavior, the city opts to promote less-unsafe behavior without caveats. Why not avoid the constitutional problem altogether by adopting a similar approach with respect to guns?

What would be so laughable about having bowls on display in restaurants, convenience stores, laundromats and other locations that would offer free rubber bullets? If the only conceivable outcome (conceivable to a D.C. official, that is) of a privately owned handgun is the violent use of it, why not protect people from that violence by giving them rubber bullets?

Those bullets, some of which are made of metal encased in rubber, are safer than regular bullets and have been used by police worldwide for crowd control – expressly to fire on people without killing them. Studies have shown that rubber bullets cause no permanent harm when they are use at great distances and strike the legs.

Granted, studies have also found that rubber bullets can cause permanent damage when striking the torso, the neck, and the head, and that about 60 percent of rubber-bullet injuries were above the navel. In fact, rubber bullets have killed people, especially when fired at too close a range. They are safer than regular bullets, but this relative safety is rather dependent upon the strict adherence to proper firing procedures.

If D.C. were to follow its condom giveaway model, however, it wouldn't need to warn people about the importance of safe procedures. Just let the public think they're safe by virtue of their being present, without regard for how they're used. That's how condom campaigns work (not just D.C.'s, but nigh on all of them).

Rare is the condom giveaway or promotion "for safety" that gives the comprehensive message on condoms and safety as does the U.S. Center for Disease Control and Prevention. Condoms offer effective prevention against HIV transmission – that's where the giveaway programs and advocates tend to stop. But the CDC offer more nuance. Their fact sheet on "Male Latex Condoms and Sexually Transmitted Diseases" notes first that abstinence or staying in a long-term, mutually monogamous relationship with an uninfected partner is the best method of avoiding STDs. Afterwards, for "persons whose sexual behaviors place them at risk of STDs," it cites the risk-reducing measures of "correct and consistent use" of condoms – and after citing that "condom use cannot guarantee absolute protection against any STD," it stresses again that condoms must be used "correctly and consistently." Incorrect use "diminish[es] their protective effect," and inconsistent use "can lead to STD transmission because transmission can occur with a single act of intercourse."

Delineating correct use would bog down a punchy slogan, however. It's unlikely the city would adopt "Coming Together to Stop HIV in D.C., Providing These Are Used Correctly and Consistently, and We Mean Completely Unrolled and Donned Each and Every Time Before Genital Contact Occurs and Lubricated and Stored Properly As Well As Used Within a Reasonable Amount of Time After Manufacture."

Of course, were D.C. to adopt the "free-condoms approach" to gun violence, however, one would hope officials would do a better job of ensuring manufacture of the rubber bullets than they did of the condoms. D.C.'s condom giveaway program has weathered heavy criticism of late for its Chinese-made condoms appearing poorly manufactured, for being poorly packaged, and for expiration dates being illegible.

Oh, and the program's name. It would have to be something along the lines of "Taking a Shot At Eliminating Gun Violence in D.C.," wouldn't it?