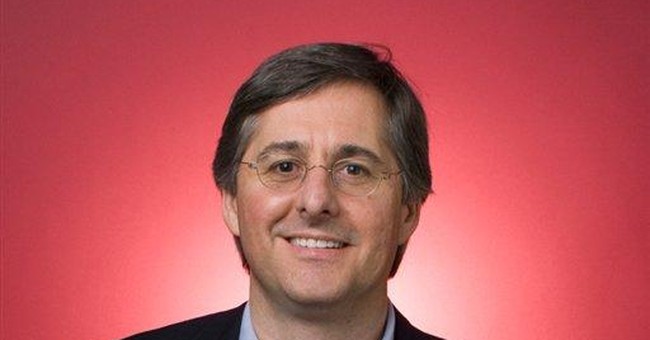 "In a move that might make some people scratch their heads, a loosely formed coalition of left-leaning bloggers are trying to band together to form a labor union they hope will help them receive health insurance, conduct collective bargaining or even set professional standards." – "A Union for Bloggers," Associated Press, August 6, 2007

"Would it kill us greedy obese Mc[expletive]s gobbling everything in our path and [vulgarity] on Planet Earth to do SOMETHING about global warming??? [expletive] Repugna-cans and their [expletive] [vulgarity] oil-guzzling phony-crony [vugarity] won't be happy till the East Coast is under the Atlantic, Hawaii is gone, and F-5 tornadoes are devastating Alaska!!!"

With that, "AngryDemGRRRL" clicked "Submit" and put her head in her hands. She was on strike.

Half the country away, "HoorayforChé" had just logged installment number 19 in his series on "Fascist Bush and Cheney-Goebbels Go to Washington." He, too, pushed back the keyboard. A bittersweet moment. The world would have to wait for how Herr Dick plotted with Haliburton executives, unidentified Israeli government officials, and Paul Wolfowitz – Wolfowitz! It's so obvious! – to bring down the World Trade Center, plunge the nation into war in the Middle East, and provide cover for their long-coveted takeover of Iraq. And Curious Georgie just wants revenge for Daddybush.

Meanwhile, Rosie O'Donnell put the finishing touches on her last heartfelt stream-of-bitterness poem: "i m on strike / yeah / we r on strike / i m / u r / but is this justice? / i ask u / what strike would b justice? // the world answers 4 us / an air strike/ but not n iraq / not n afghanistan / u know / o u know where george."

Her fans will understand. They know steel doesn't melt. They know democracy is dead. They will know this strike is for justice.

Around the nation, the first-ever bloggers union strike began in earnest.

Thousands of Internet site admins uploaded the "On Strike" posticon, a little red "mad face smiley" hoisting a cartoon placard that alternates between "No Justice, No Peace" and "Support your local blogger" and marching back and forth across the screen. Thousands of "log out" buttons were clicked. Thousands of refrigerators were raided. Thousands of heads were tilted with brows furrowed. The warriors became surfers, anxiously awaiting the backlash.

How soon till they were missed? When would the corporate-media stench become unbearable? How long could they take the right-wing regurgitation machine? One week? Two?

How long till the sheeple realized the truth?

Their demands were simple. The Democrats must respect them for their contributions to the party; indeed, to the country and yes, the world. They need healthcare. They want organization and uniformity. They could use professional esteem, maybe even credentialing. They need money.

And the world needs them! They're on the front lines, clashing with the corporate interests and their phalanx of right-wing bloggers, the Christian theocrats and their "Establishment Clause," knuckledraggers who watch Faux and listen to "hate radio," the global-warming deniers, the bought media and their corporate bias, National [Re]Public[an] Radio and the other GOP echo chambers, and of course Bush and the neo-cons. Without them, who will rage truth to power? Without them, it will like be 1994 all over again, or 2000 in Florida. They have to see that.

But the warriors place their health on the line, and should they expect to do so for free? The battles are stressful, the rage visceral, and the long hours sitting before a screen and using a mouse detrimental to eyes, wrists, shoulders, waists, and nether regions.

No justice, no peace. Support your local blogger. C'mon.