Infanticide and Unintended Consequences in Maryland 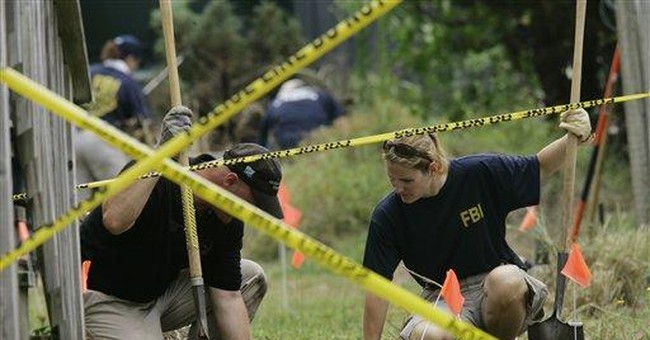 A grisly case in Maryland has the pro-abortion movement distressed that a state law banning the murder of an unborn baby could be used against a woman accused of killing her unborn baby. This is what unintended consequences sound like to the abortionistas.

First, here are the preliminary facts in this gruesome case. As of this writing, four pre-term infant bodies have been found at the Ocean City, Maryland, home of Christy Freeman, according to published reports. Police made this discovery after Freeman had been taken to a hospital bleeding heavily, and doctors found a placenta and an unevenly cut umbilical cord. The hospital alerted the police, and the police found the remains of a newly delivered baby boy in her bathroom sink.

Further searching the premises, police found two more infant corpses in a garbage bag in a trunk in her bedroom, and another body in a vehicle parked in her driveway. Chillingly, Fox News reports that police are saying cadaver dogs are indicating more bodies could be found.

According to reports, police believe the infants' deaths were caused by self-induced abortions. They have charged Freeman with the death of the latest victim, under Maryland's fetal-homicide law, which outlaws killing a fetus that could live outside the womb. That law was passed in 2005 in reaction to the 2002 California murders of Laci Peterson and unborn child Conner by Scott Peterson.

A provision of the law, however, appears to allow for self-induced abortion that results in the fetus's death. It exempts from prosecution "an act or failure to act of a pregnant woman with regard to her own fetus."

WBALTV 11 News in Baltimore spoke with two co-sponsors of the law under which Freeman is charged. Maryland Delegate Christopher B. Shank, a Republican, said the exemption was in place because "We didn't want abortion to become a factor."

Another Republican co-sponsor, Delegate Richard B. Weldon Jr., told WBAL that the exemption didn't apply to "wanton or reckless behavior," which he said would include a self-induced abortion. Weldon said Freeman "should be charged under the law."

Weldon was referencing language in a provision of the law that authorized the criminal prosecution for murder or manslaughter if the person charged "wantonly or recklessly disregarded the likelihood that the person's actions would cause the death of or serious physical injury to the viable fetus."

A spokesman for the prosecutor, Worcester County State's Attorney Joel J. Todd, told WBAL that Todd plans to test the limits of the law.

And well he should. Here is a case where machine law risks allowing a grave, moral injustice on the basis of an exception inserted out of purely political motivation. If Freeman is found to have purposefully killed her own unborn children, then that technicality should not exonerate her of the crime of infanticide. It would be logically and morally untenable for the state to hold simultaneously that it is murder for someone to kill a woman's unborn child, but A-OK for the woman to kill it herself.

Indeed, this tension was precisely the reason feminists heatedly objected to the prosecution of Scott Peterson, Laci and Conner Peterson's killer, for the death of Conner. It is also why they strongly opposed subsequent legislation, such as the fetal-homicide laws in Maryland and many other states as well as the federal Unborn Victims of Violence Act of 2004. Recognizing the horror of infanticide perpetrated by an outside attacker is only a small step away from recognizing the horror of infanticide regardless of the killer's identity.

Regardless of the law, this horror is all too real in Ocean City, Maryland. Only a callous, rote adherence to statutory exception could deny it according to subsection (F). That is the core of machine law. But a cache of infant corpses cannot be stripped of its awfulness by the "if" clause of a mother's string of self-induced abortions.

The abortionistas would say otherwise, of course; but that is because they have to hold that uncertain ground, having lost the debate on the murders of Conner Peterson and other unborn children. They're not happy with the plot they're left to defend. They know it is a very slippery slope.