Hamas Mickey's Death Shall Not Be in Vain! 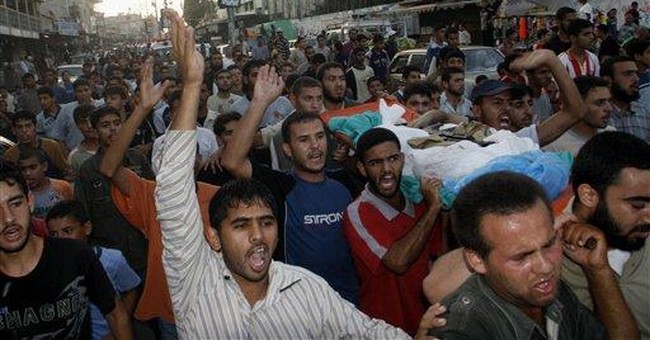 He was a children's television hit; a giant, black and white mouse wearing white gloves and singing about world unification in a high-pitched, squeaky voice. Then a Jew killed him on the air.

He was "Hamas Mickey," also known as "Farfour," the mouse that preached Islamic dominance on Palestinian children's television. "You and I are laying the foundation for a world led by Islamists," he would tell his tyke viewers, singing "Rafah sings 'Oh, oh,' its answer is the AK-47," "Oh Jerusalem, it is the time of death," and other bomb-strapped kids' classics. Then Allah in his mercy saw fit to martyr the mouse.

On Friday, June 29, Hamas Mickey was martyred on the air by an Israeli who came to steal his land. He is now in the celestial palaces of Allah, engaged in the carnal delights of six dozen virginal vermin. Down here, the struggle continues.

Vowing vengeance for his friend, Don al-Duck intends to pursue Israelis across Palestinian children's networks, along with his nephews Huey, Dewey and Kablooey. They can be seen daily on Drakes and Jihad.

But O viewers, Drakes and Jihad is not the only show in Gaza laying the toddler foundation for a world led by Islamists. Allah forbid we should overlook the glorious Mahmoud bar-Ney and Friends! This week, for example, bar-Ney and his child army use songs, chants and special moments to teach Baby Blowup how to fake rage in the streets when Western camera crews draw nigh. Then the tune to "This Old Man" begins, and everyone joins together to sing bar-Ney's theme, "I Hate Jews."

A similar show features four brothers bringing songs, make-believe and dance in an Islamist world-domination context. And this week on The Wig Outs, Mullah Featherscimitar calls a halt to all soccer games, and the brothers work to convert soccer stadiums for executions. The letters T-N-T are highlighted, and the Wig Outs sing a rousing rendition of "Here Comes the Big Red Car Laced with Explosives."

Another blessed show fills little ones with the know-how of simplified suicide belt-making, roadside bombs, and other IEDs. Inspired by Baba the Bomber, the kids of Gaza confidently proclaim, "Can we bomb it? Yes, we can!"

For older children, Flight 29 Downed follows teenagers stranded in the land of the Great Satan. The teens form their own cell of jihadist operations whose goal is to stage a successful attack against a jet loaded with fat Western infidels bloated with oil and contempt for Allah. The teens must combat teenage angst, personality clashes, and their own budding desires in addition to waging war against their unsuspecting neighbors.

Beloved by children of all ages, the "mystery gang" in Scoo ibn Du, Where Are You? drives across Palestine in a beat-up Red Cross van unmasking the Zionist plots behind seemingly obvious Islamist attacks. The show contains numerous running gags, including Wafiyyah losing her hijab, Sharif's appetite, and talking dog Scoo's irrational fear of "rary Rews!" The gang's van is always filmed by idiot American journalists as proof of Israeli rocket attacks, and the show always closes with the Zionist conspirators cursing "the meddling kids" before being beheaded.

Oh, and may a thousand camels walk across me if I forget the classic animation in The Bugged Looney/Road Bomber Hour. Behold the hapless coyote and his IEDs that never quite work, yet that tireless son of Allah never gives up! Equally inspiring are the explosive rages of Yosem Sami, jihadist in the infidel's Western hinterlands. And who among us could ever forget the lines "Allahu akbar, doc?" "Jew season! Yankee season!" and "I tawt I taw a Dionist pig!"

Let it not be said, then, that the message of jihad and Islamist world domination is being neglected by Palestinian children's TV! O brothers, don't let it be said, or else there will be more riots in the streets and fellow believers trampled.