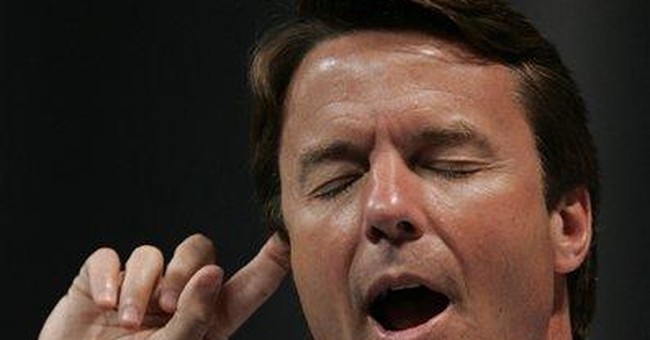 In his book No Excuses, Shrum alleges that John Edwards told him, apropos of homosexuals, "I'm not comfortable around those people." In an interview with CNN's Wolf Blitzer, Elizabeth Edwards clarified that her husband was speaking of being made to feel uncomfortable when a gay friend of hers expressed a desire to "snake" her "awfully cute" fiancé.

A question: How are Edwards' former colleagues at the University of North Carolina at Chapel Hill have reacted to such remarks, if he were still at UNC? How are they reacting?

Are they denouncing him for his "violent, heterosexist comments"? Are they decrying him as being a "perfect example" of "white, heterosexual, Christian male privilege"? Are they saying he ought to be investigated?

Are they hinting darkly that Edwards should be made to feel marked or threatened or vulnerable?

No? Why not? That's exactly what happened in 2004 to a UNC-CH student who said similar things in an English classroom, in response to an instructor's question-begging discussion topic of "Why do heterosexual men feel threatened by homosexuals?"

The student recounted a friend's experience with being pursued romantically by a gay man and how his friend felt, not threatened, but disgusted and dirty. And he then said he would feel uncomfortable at seeing two gay men kissing in front of him and his child at a baseball game.

In response, the instructor, Elyse Crystall, savaged the student by name in a classwide email, saying that that "i will not tolerate any racist, sexist, and/or heterosexist comments in my class" (all quotations sic – this is, after all, communication from an English instructor at a major public university). She clarified that "what we heard thursday at the end of class constitutes 'hate speech' and is completely unacceptable."

Furthermore, she said (emphasis added), "what we experienced, as unforuntate as it is, is, however, a perfect example of privilege. that a white, heterosexual, christian male, one who vehemently denied his privilege last week insisting that he earned all he has, can feel entitled to make violent, heterosexist comments and not feel marked or threatened or vulnerable is what privilege makes possible."

The student complained publicly, and U.S. Rep. Walter Jones (R-N.C.) contacted the U.S. Dept. of Education's Office of Civil Rights, noting with a high probability of accuracy that "Had Ms. Crystall substituted the word 'black' for 'white,' 'homosexual' for 'heterosexual,' or 'Muslim' for 'Christian,' she would have been suspended or fired immediately."

As the controversy swirled, Crystall's fellow faculty radicals lionized her for acting not just appropriately, but heroically against a student under her authority. He was inflicting "violence" on the classroom, they said. Therefore, by singling him out and denouncing him by his name, race, sexual preference, religious creed, and gender, she was protecting her students from violence.

To Crystall and her fellow travelers, Edwards' former colleagues, it was a travesty that she was under investigation when a violent, privilege-rid, straight, white, Christian male was still speaking freely on campus without feeling "marked or threatened or vulnerable." A report in The Chronicle of Higher Education Daily News of March 29, 2004, noted that Crystall was upset "that while the government could investigate her remarks as racist or sexist, it would not investigate the student's as homophobic."

The Office of Civil Rights found that Crystall had racially and sexually harassed and discriminated against her student. Her university escaped reprimand because school officials made all the appropriate remarks about protecting free speech on campus. They also renewed Crystall's contract; she is still teaching at UNC-CH. Her victim, after all, was just one of those "white, heterosexual [C]hristian males."

Nevertheless, what Crystall's beleaguered student had done then is nothing more than what the Edwards have done. He recounted his and his friend's discomfort with respect to homosexuals. So did John and Elizabeth Edwards. What's the difference?

Why do faculty radicals decry the former as a "violent, heterosexist hate speaker" but say nothing about the Edwards? Have they not, in their parlance, inflicted violence on the entire nation, not just a classroom?

Could it be that they've finally awoken to the grand absurdity of inferring violence and hate from someone merely saying that something made them feel uncomfortable?

Or is just another example of the Left's willingness to waive their standards for politicians who support their political goals?