There Was an August Chamber Who Swallowed a Fly 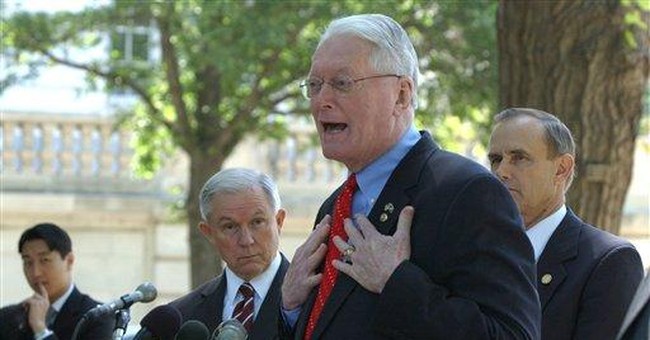 Remember the children's song about the old lady who swallowed a fly? We don't know why she swallowed the fly, but the poor woman begins consuming more and more to address the fear that she'll die for swallowing the fly.

Would that the Senate understood that lesson as they grapple with the issue of illegal immigration.

From reports, the Senate amnesty plan is attempting to address the problems of the coming Social Security crisis, the surge in illegal immigration since the last amnesty (or amnesties), and the labor crisis (i.e., the "Americans won't work those jobs" problem).

Just as the old lady wasn't content to digest the fly (let alone take an emetic) but rather chose to repeat her folly on an increasingly larger scale, the Senate is not about to deal with the underlying causes of those problems, but make them worse.

Lawmakers long ago swallowed the flies of the Social Security Ponzi scheme, the minimum wage, numerous welfare programs, and previous amnesties of illegal aliens. These applied disincentives to poor Americans to work, reduced the number of potential jobs employers could offer (legally), priced the least skilled American workers out of the job market, reduced the cost and stigma of not working, and grew generations of Americans increasingly reliant on the government to care for them, even as the inevitable Social Security shortfall draws nearer.

Furthermore, it dangled more and more incentives to people in poorer nations south of our borders to sneak in. They weighed the benefits of more employment opportunities and more government handouts against the reduced risk of being deported and greater likelihood of being able to stick it out till the next amnesty rolls around. One cannot blame the border-crossers for leaving extreme poverty to come here.

And it's true, America is a nation of immigrants. It has not always been, however, a nation of entitlements. Proponents of the Senate amnesty plan – including the president – may find it politically expedient to insinuate ignorance, racism, and worse on the part of people who oppose it, but were they to condescend to listen to Americans who find the idea outrageous, they would find that concerns over national security and a vastly expanding welfare state are at the fore.

In this post-September 11 climate, the national-security concerns speak for themselves. Regarding the latter, the Heritage Foundation's Robert Rector projects that this amnesty plan could cost the U.S. $50 billion annually and would result in "the largest expansion of the welfare state in 35 years." As Rector showed, immigrants were once less likely to be on welfare than native-born Americans, but now they are more 50 percent more likely, and their likelihood of being on welfare grows the longer they live in America.

Americans by and large are not going to complain about people coming here who embrace the traditional American values of hard work, freedom from government meddling, and individual rights. But the prospect of rewarding 10 million illegal immigrants – people whose first act in this country was disrespect for its laws and sovereignty – with all those welfare benefits positively alarms them.

At their core, Americans still cleave to the ideal of America as a land of opportunity, beckoning to those around the world yearning to breathe free. This is the legacy they wish to pass on to future generations of Americans, no matter from where their ancestors hail. What it means to be an American has always been an inherited ideal rather than a genetic trait, and it is this ideal that is ultimately at stake. A rapidly growing graft of citizens whose experience with what it means to be an American is to have fellow citizens on the hook for your food, housing, education, medical care, and the same for your parents is going to have a positively Marxist take on the American ideal.

That is the dish set before Senate now with this amnesty bill. We don't know why they've already dined on so many other bad ideas. But this one's worse, it's bigger, and it doesn't address past follies, it outdoes them. Away with it.