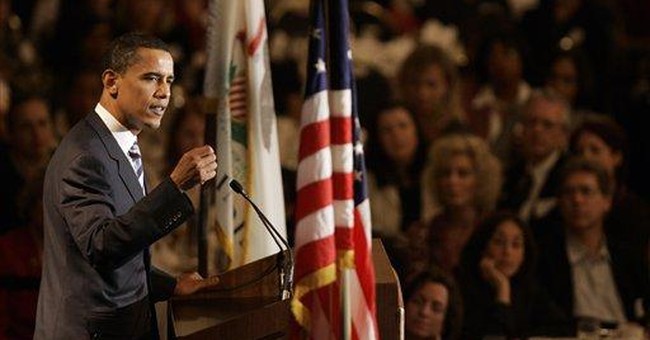 Hours after the Virginia Tech massacre, Barack Obama spoke at a campaign stop in Milwaukee. Obama could have shown compassion unalloyed with politics, what one hopes to find in a leader when disaster strikes. But he didn't. In the grand tradition of leftist orators, Obama repackaged the awful news of the day to "reflect" on his own political themes.

"I hope," the candidate said about the massacre, "that it causes us to reflect a little more broadly on the degree to which we do accept violence in various forms all the time in our society: we glorify it, we encourage it, we ignore it, and it's heartbreaking."

In other words, some deranged madman just perpetrated the greatest shooting massacre in the nation's history, and Obama wants us to "reflect" on whatever "violence in various forms" that he can say we're responsible for. While people were crying on each other's shoulders in Blacksburg, tensely waiting by hospital beds and telephones, or gathering in candlelight vigils across the nation, this character was in Milwaukee trying to put the national nose in a corner to think about what we've done. (Any similarity between Obama's reaction and killer Cho Seung Hui's note "You made me do this" revealed later is sickly coincidental.)

Then Obama went into a litany of the other forms of violence that he said "we're going to have to think about." His comments, delivered with long, thoughtful pauses that belied their callous oblivion, came out more like a parody of a Democrat usurping current events for political gain than something from a serious candidate.

"It's not necessarily physical violence," he said, "but the violence that we perpetrate on each other in other ways." That was the windup; here's the pitch:

"Last week the big news obviously had to do with Imus, and the verbal violence that was directed at young women who were role models for all of us, role models for my daughters... There's the violence of men and women who have worked all their lives and suddenly have the rug pulled out from under them because their job has moved to another country, they've lost their job and they've lost their pension benefits and they've lost their healthcare, and they're having to compete against their teenage children for jobs at the local fast-food place paying $7 an hour. There is the violence of children whose voices are not heard in communities that are ignored, who don't have access to a decent education, who are surrounded by drugs and crime, and a lack of hope. So there's a lot of different forms of violence in our society ..."

To recap: Because some deranged lunatic just shot up a college campus in a way never before witnessed in America, candidate Obama thinks we need to use the occasion to reflect on Imus and pensions and the minimum wage and stuff.

By the same ridiculous standard, one finds there's also a "violence" in big-government blowhards immediately seeking to capitalize politically on the slaughter of innocent college students. "It's not necessarily physical violence," but what should we call it when someone perpetrates on us a disgusting analogy that compares hate speech, job loss to outsourcing, losing health insurance, taking a minimum wage job, poor education, lack of "hope," etc. to real, horrific violence?

Also by the same standard, this May 6 will mark the 70th anniversary of the Hindenburg disaster. I hope that the memory of it causes us to reflect a little more broadly on the degree to which we do accept gasbags in various forms all the time in our society.