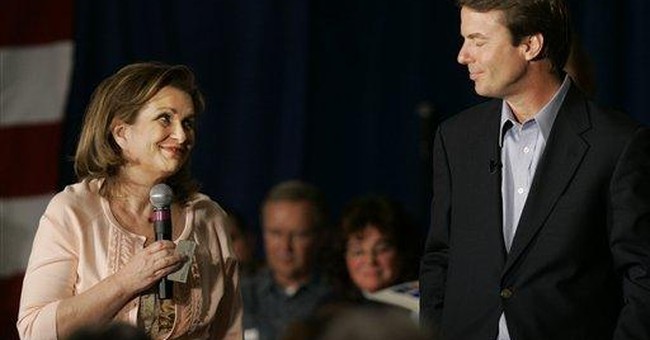 According to The News & Observer of Raleigh, John Edwards is "a tough mill village kid who early learned how to punch someone's lights out," "was noted as a bruising hitter on the football fields," and "has a toughness behind his boyish facade." If so, he certainly doesn't act like it. Do tough mill village kids habitually run from debates?

Edwards, a man who since 2002 has openly aspired to be leader of the free world — a job that entails squaring off against, for example, North Korea, Iran, Islamic radicals, Marxist dictatorships in the Americas, drug traffickers, Russian hardliners, Congress — has now backed out of a second presidential debate for being co-sponsored by Fox News.

Why? Because Edwards thinks the most widely watched cable network has a conservative agenda. Or at least that is his justification. According to a statement released by the Edwards campaign, "we believe there's just no reason for Democrats to give Fox a platform to advance the right-wing agenda while pretending they're objective."

Even if one accepts Edwards' sinister depiction of Fox, it's hard to imagine a leader of any consequence acting like that. Edwards here resembles the sniveling kid who takes his ball and goes home whenever someone upsets him. And the more his campaign staff and press toadies try to spin his retreat as some sort of principled stand or dissent, the more they sound like the traveling minstrels to Monty Python's "Sir Robin":

Brave John Edwards ran away,
Bravely ran away, away.
When Fox News reared its ugly head,
He bravely turned his tail and fled.
Yes, brave John Edwards turned about
And gallantly he chickened out.
Bravely taking to his feet,
He beat a very brave retreat.
Bravest of the braaaave, John Edwards!

Ducking out of debates surely can't help John Edwards in a general election. As Patton observed, "Americans despise cowards," and that looks cowardly. Why do it? Perhaps stamping that Fox has a right-wing agenda will please the MoveOn fringe, whose support is apparently necessary for a Democrat vying for the party's nomination (aside: look out for the first Democrat to treat MoveOn the way Bill Clinton did Sister Souljah).

But to the "masses" — that vast swath of people across America who don't think "Hitler" when someone says "Bush" — it looks cowardly.

Meanwhile, Edwards' wife is publicly attacking the nearest neighbor to their 100-plus-acre property, Monty Johnson, whom she's never met. Mike Baker with the Associated Press reported this weekend that "Elizabeth Edwards says she is scared of the 'rabid, rabid Republican' who owns property across the street from her Orange County home -- and she doesn't want her kids going near the gun-toting neighbor … who refuses to clean up his 'slummy' property just to spite her family."

In 2004, Johnson kept Bush/Cheney signs in his yard, like many of Edwards' neighbors in Raleigh. Unlike them, however, he can't look forward to Edward moving. For now, he has a "Go Rudy Giuliani 2008" sign facing Edwards' property, but he told the AP he plans to move. It's partly because of higher taxes, he said, but also, "I don't want to live somewhere where someone's always complaining about me."

Regardless, such a cavalcade of craven nonsense from his wife ought to embarrass Edwards. Not only is Elizabeth Edwards using her access to media to carry out a personal vendetta against a private citizen, but also she is admitting to some rather paranoid and elitist notions. Rabid, gun-toting, and slummy? Where is her husband while she's saying such things?