Scrub the airwaves with moron offsets 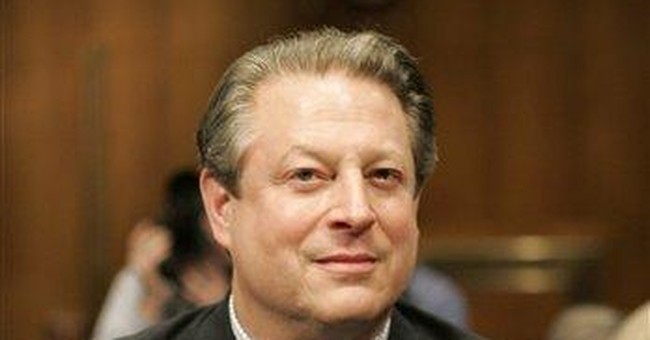 Give credit where it's due; these "carbon offset" deals are Al Gore's greatest idea since the Internet. Not only has he given the Holy Warming Church their very own indulgences, he's also invented a new way to approaching human faults without actually trying to change them.

Here's how it would work, in a nut's ... er, a nutshell. If you're a veritable smokestack of moronic ramblings, inane opinions and bug-eyed rants, and you'd rather not sacrifice your venting lifestyle for the sake of rationality, then moron offsets are just the ticket for you. Just pay someone else to "scrub the air" with good sense after you belched forth some gassy nonsense, and you won't have to bother rethinking anything.

You can see how close this system is to Gore's carbon offsets. Imagine how it could have worked this week.

Let's start with Gore. In testimony before House and Senate committees this week he gave off the following: "The planet has a fever. If your baby has a fever, you go to the doctor. If the doctor says you need to intervene here, you don't say, 'Well, I read a science fiction novel that told me it's not a problem.' If the crib's on fire, you don't speculate that the baby is flame retardant. You take action."

Rather than trying to have Gore sort out exactly who or what is the baby in his weird analogy, or tell who's the doctor, let alone explain why you would even bother calling a doctor when the obvious reason for the child's elevated body temperature was his proximity to open flame, just offer him a way to offset that "moron footprint." He could, for example, package the "Saturday Night Live" Blue Oyster Cult skit featuring Christopher Walken into a DVD billed "An Inconvenient Spoof," so that everyone who hears him start up with "The planet's got a fever" will immediately think, "and the only prescription is more cowbell!"

After John Edwards withdrew from a Nevada debate sponsored by Fox News (to paraphrase Monty Python, "Yes, brave John Edwards turned about / And gallantly he chickened out, / Bravely taking to his feet, / He beat a very brave retreat"), and after Kate Michelman touted him as potentially the first female president, CNN correspondent Carol Costello complained of "neocons" deliberately "feminizing" Edwards. Now you won't need to try pointing out how Edwards and his friends are doing just fine in that regard all by themselves. Moron offset: Just have CNN grant one day's free advertising to the NFL Network or bring in Harvard professor Harvey C. Mansfield to discuss his book Manliness.

Jesse Jackson penned an op-ed for the Chicago Sun-Times in which he said that the "definition of a decent economy" was a "job for every person willing and able to work," claimed that for three decades "the United States has built jails for those unable to find work," and stated that "For those who don't graduate from high school, the situation is at deep Depression levels."

Moron offset: Take the tuition money Jackson had pledged last year to "Stripper No. 1" of Duke lacrosse infamy and use it instead to buy college students across the nation their own copies of Thomas Sowell's Basic Economics.

On ABC's "The View," Rosie O'Donnell greeted news of Khalid Sheik Mohammed's confessions with anger and disbelief, railing that the terrorist mastermind and tank-top undershirt model had been tortured into confessing "in secret CIA torture prisons in Guantanamo Bay, where torture is accepted and allowed."

Moron offset: Pay to set up a continuous looping feed of "The View" to Gitmo to subject detainees to a particularly cruel brand of actual torture, but one O'Donnell wouldn't object to, given that she's spent a lifetime building up a strong resistance to the pain of hearing her ill-considered tirades.

New Orleans Mayor Ray Nagin said that Hurricane Katrina was actually a racial-diaspora plot to change the city politically. "Ladies and gentlemen, what happened in New Orleans could happen anywhere," Nagin told the National Newspaper Publishers Association. "They are studying this model of natural disasters, dispersing the community and changing the electoral process in that community."

Clearly there could be no climate redress for such paranoia without moron offsets, such as what could be offered to Nagin: paying for dry owner's manuals for the owners of all the plasma TVs looted in the wake of Katrina.

In short, moron offsets offer a promising and immediate response to airwave pollution. Finally — a way for leftists flying off the handle to achieve "moron neutrality." Thanks, Al Gore!