Greeting cards for abortion and other rights 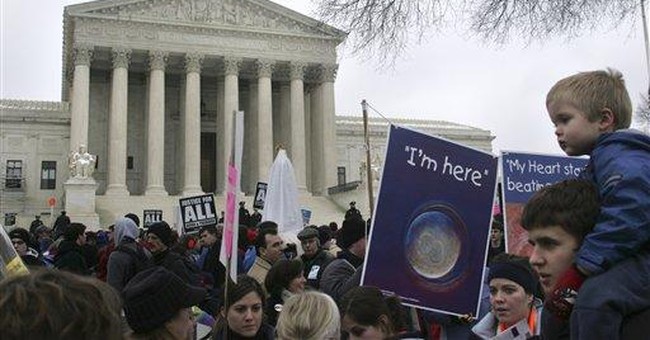 We Americans can certainly learn a lot from a nonprofit organization's idea for "abortion greeting cards." No, really.

The Associated Press reported this week that an Oakland, Calif., nonprofit called "Exhale" is offering "a series of electronic greeting cards that concerned friends and relatives can send to a woman after she chooses to have an abortion." For example, one card tells the woman she "did the right thing." Another "expresses sympathy, offering the gentle reminder that, 'As you grieve, remember you are loved.'" (For some reason — probably just an oversight — there's no sympathy card for the father.)

The Supreme Court and all our self-appointed elite agree: abortion is a woman's right. So you might ask how on earth could someone just exercising her right be cause for grief. But that's the wrong way to look at it, or else next thing you know, you might start wondering if there's not some other reason for women having an abortion to grieve. You might start to suspect there's a different cause for the guilt.

One of the cards even offers a chipper "God will never leave you or forsake you." You don't want to be caught thinking why just exercising a God-given right would make someone need that card.

Because if you start thinking along those lines, then pretty soon you'll start noticing that there are more crisis pregnancy centers than abortion clinics. And then you might see that those centers work to help pregnant women find prenatal care, housing, clothing, charity, an uplifting vision of themselves as a mother and giver of life, friendship, hope, and maybe even God. And then you might be tempted (Earth-Mother forbid!) to compare that vision with the cynical vision of a pregnancy being likened to a tumor … a tumor that, hm, kicks and responds to ambient noise and grows and … well, the analogy tends to break down over a period of nine months.

So you don't want to pursue those lines of thought. If you were Al Gore, of course, you could wow feminists and eco-looneys by having your bogus company award every women having an abortion a free, "life"-time supply of "carbon credits" – for all the "carbon footprints" not left by her children.

But given the inconvenient probability that you're not Gore, try this idea instead. Obviously this California nonprofit has stumbled upon a new, potentially lucrative field of greeting cards for people acting within their inalienable rights. Because people doing what society and our Constitution agree is A-OK must be grieving and in dire need of encouragement.

People are hurting – for nothing. It must be an untapped market, and some greeting-card entrepreneurs could really rack up. As a classic liberal, lover of freedom, and humanitarian, I don't mind sharing these suggestions for the greater good:

For people who take the First Amendment step of bravely talking, there could be a range of cards. Feel guilty for speaking up? You could be told, "As you speak, remember that you are loved." Need encouragement? How about a silly rhyme: "Roses are red; you say they're blue. We have free speech; I'm proud of you." There could be a "Thanks for Talking!" line if you just want to send a "friendship" card to a vocal friend. Oh, and for the religious yap, a John 1:1 "Inspirations" card would remind him that "In the beginning was the Word."

Speaking of religious yaps, no doubt there'd be a huge demand for "Holiday Encouragement" cards, perfect for the loved one on your list who wigged out the local ACLU snitch with a hearty "Merry Christmas!" You could even have special "Beat Hell Soon" cards for Bible-believing invalids. Remember, people taking advantage of their mundane, God-given rights need all the encouragement they can get, the poor souls.

There could be a special line of "Not Missing You" cards for people practicing free assembly. Heartfelt "Good Luck (You'll Need It)!" cards for someone petitioning the government for redress of grievances. Friend buy a new gun? Why not a "Give It Your Best Shot" card? (Enemy buy a gun? It's not too late for "I'm Sorry.")

And who hasn't secretly wished just once to receive an "Atta Boy" for not housing a soldier? Are you seeking due process after your local government threatened to seize your land under eminent domain? If so, what could make you feel better than a musical greeting card serenading you to the strains of Woody Guthrie's "This Land Is Your Land"?

Those are just a few of the cards possible in this new, promising line of "I Exercised My Rights and Now I Feel Bad" greeting cards. Look for them soon in the card aisle in your favorite grocery store. You're sure to find them right next to the new "Unbirthday" section.