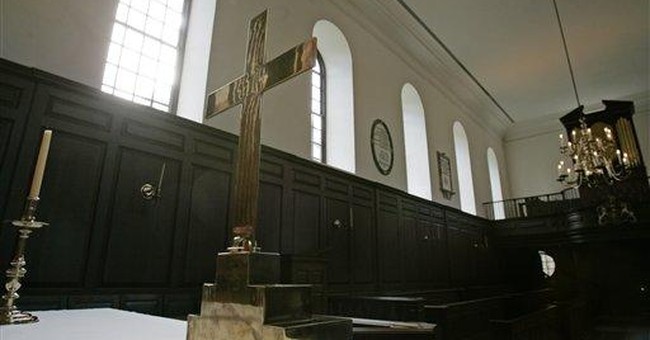 Understandably, the show sparked an uproar, so much so that college president Gene Nichol was moved to respond. "I don't like this kind of show and I don't like having it here," he said. "But it's not the practice and province of universities to censor or cancel performances because they are controversial."

Fair enough; allowing blatantly offensive, vulgar, controversial speech is a great way to demonstrate that speech is truly free. Nichol's comments seem to hearken back to those famously attributed to Voltaire, "I disapprove of what you say, but I will defend to the death your right to say it."

And in the increasingly neo-puritanical speech climate at American colleges, it's a welcome note to hear from a college leader.

Nichol justified his decision first by saying the cross wasn't "banished" from the Chapel, but would be "displayed on the altar at appropriate religious services" (his statements and much more can be found at www.savethewrencross.org). Nevertheless, he stressed, "the Chapel is also used frequently for College events that are secular in nature – and should be open to students and staff of all beliefs."

And there he ducks behind the enthymeme. He never explains how he derives his conclusion that Wren Chapel isn't open to students and staff of all beliefs when the cross is on the altar. And he doesn't have to, not in American academe. One-legged syllogisms that reach leftist conclusions are all the rage: A higher minimum wage will solve poverty. Basing admissions on skin color will end racism. Restrictive speech codes will make people nicer. Supplanting Shakespeare with Toni Morrison will inspire more black students to write. The sight of a 200-pound stripper in pasties and a G-string will help people take sex workers seriously and thereby "empower" them (no kidding, those were justifications for the event).

Unfortunately for William and Mary, its students and alumni, the college is headed by a man who believes some of its students and faculty – who surely cannot be unaware of the college's religious roots nor of what a chapel and an altar are – cannot handle the sight of a cross on that altar, in that chapel, on that centuries-old institution originally founded to teach Christian theology and train missionaries. That belief must surely be more insulting to them than a glimpse of an old, rugged cross.

What a pity it is that Nichol didn't first declare it against "the practice and province of universities" to remove religious displays just because they are conceivably controversial. He would have protected a vital part of the college's history while reinforcing the importance of freedom on campus – and the corresponding need for intellectual stamina to withstand offensive speech and ideas. Had he done so then, his later defense of the sex workers show would have rung true.

Nichol could have defended both the cross and the show and made an important contribution to the withered climate of debate in American higher education. Doing so would have lodged a significant challenge to the prevailing notion that, of all people, young adults in college need a big Mother Hen to protect them even from feeling "uncomfortable" by challenging or offensive ideas, images, and speech. It's no wonder so many bright, young intellectuals drop like Tennessee Fainting Goats at their first encounter with a racial slur. Years of mollycoddling have taught them it's something they simply can't endure.

Instead, Nichol's inconsistent approach to defending controversial ideas on campus prompts a search for a consistency elsewhere. It's not hard to find. He removed a Christian cross from public view, yet he defended a show that offended, among others, Christian mores. The search reveals, alas, just another illiberal wolf in free-speech's clothing.