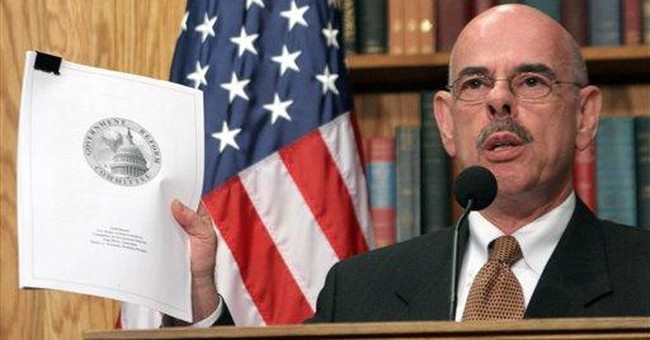 In the fable of Chicken Little, an acorn hits the title character's head, she concludes that the sky is falling, she convinces her barnyard pals of the same, they rush pell-mell to tell the king, and on the way get eaten by a fox.

The lesson of Chicken Little is that all that's required to start a panic is just one nut. A natural phenomenon boggles Little's brain, her hysterical squawking scares her community into a rush for government action, and from an imaginary future threat they run smack into the jaws of a real present one.

The moral of the story depends on who you are. If you're a Chicken Little or you know one, it's don't jump to conclusions, don't panic, don't believe everything you're told, and don't buy into mass hysteria.

If you're a fox, the moral is toss a few nuts at the hysterical types and go put the kettle on. And this Friday, Feb. 2, it's going to be a veritable nutstorm. That's when, we're told, the United Nation's Intergovernmental Panel on Climate Change will release its "smoking gun" report on human-caused global warming. The foxes are already licking their chops.

Contrary to popular perception, however, the IPCC won't release the actual report until May. Friday's the day the IPCC releases its Summary for Policymakers. Not only does the IPCC plan to give policy meddlers three months' lead time without fear of challenge from what's in the report (a problem previous summaries have suffered) — they're also prepared to edit the report after the fact. The IPCC procedures document says that "Changes (other than grammatical or minor editorial changes) made after acceptance by the Working Group or the Panel shall be those necessary to ensure consistency with the Summary for Policymakers or the Overview Chapter."

The foxy barrage-of-nuts approach has been the standard approach to building community consensus for federal action on global warming at least since 1989, when Stanford biological sciences professor Stephen Schneider told Discover Magazine that October, "We [scientists] need to get some broad-based support, to capture the public's imagination. That, of course, entails getting loads of media coverage. So we have to offer up scary scenarios, make simplified, dramatic statements, and make little mention of any doubts we might have."

Among others, Al Gore agrees with that approach. Last year he told the environmentalist magazine Grist, "I believe it is appropriate to have an over-representation of factual presentations" – what a euphemism! – "on how dangerous it is, as a predicate for opening up the audience to listen to what the solutions are, and how hopeful it is that we are going to solve this crisis."

And boy have we been getting some dramatic, scary, "over-represented" scenarios in the media. They are so prevalent it's probably unnecessary to provide examples, but here are some recent ones anyway:

And those are but a dip of the cup in the roiling river of media climate-change hyperbole. It's already enough to drown out the Y2K paranoia of late December '99 and the bird-flu fright of '06. And brother, if you think you're heard hysteria before, you just wait till Friday. You ain't heard nothing yet.

Come Friday, about the only thing you won't have heard is the actual report.