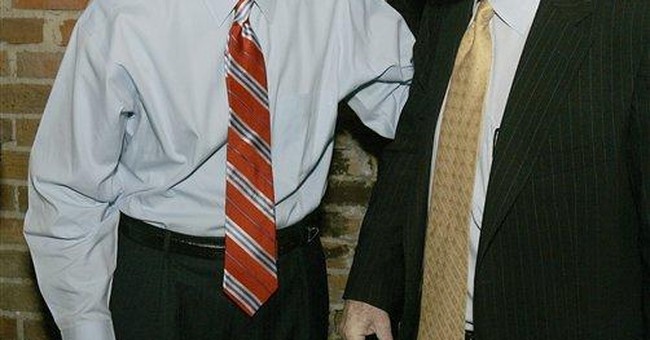 Townhall.com and the Salem Radio Network are planning a nationally broadcast Republican presidential debate for this summer. In an exciting development this week, the Republican Party of Florida announced their support for the debate and will be working with us to help the candidates carry their message across the airways to millions of readers, listeners, and viewers in the important state of Florida and nationwide.

Florida -- with its 27 electoral votes is a must-have state for any candidate trying to win the presidency and the Florida GOP has made great strides in keeping it a red state.

In 2006, a year when Republicans won only three open gubernatorial seats nationally, the Republican Party of Florida played a large role in Charlie Crist's win, helping to build a grassroots team to ensure victory.

And in 2008 it is going to be even more pivotal. Republican Party of Florida Chairman Greer, upon his election in January, immediately focused the party on victory in 2008, designating the year as "2007: Building a Foundation for Victory."

The party is actively working to both build the party in non-traditional Republican voting blocs and build a grassroots team that will ensure Florida's electoral votes go to the eventual Republican nominee.

The state is moving up its primary election date to January 29 making it the first big state primary of the year and victory will give the winning Republican candidate momentum going into Super Tuesday. Chairman Greer and the Florida Republican Party pushed hard in the Florida legislature in order to give Floridians a larger say in the selection of the party’s nominee.

The Florida GOP wants to showcase the candidates to Florida voters and understands that the road to the nomination goes through the conservative base of freedom loving, family-oriented Floridians.

When Townhall.com caught up with the Republican Party of Florida Chairman this week he added, “Having our candidates here in Florida debating the issues important to conservatives across the state and the nation, coupled with Florida's now relevant primary, will ensure that Florida's Republicans are that much better informed and excited about 2008. We look forward to working with Salem Communications and Townhall.com to make this debate as successful as possible."

The listeners of conservative talk radio will play a pivotal role in selecting the Republican nominee. Before the internet, talk radio was the only medium for conservative voices to be heard. Townhall.com has combined with talk radio to create a platform for conservative leaders and grassroots activists alike to make their voice heard on the important issues of our day. And that is what our planned debate would be about.

Townhall.com, part of the Salem Web Network, is the largest conservative opinion, news and community site with nearly 2 million unique readers each month. With commentary from more than 200 of the nation's best known conservative writers, over 120 leading conservative organizations, over 3,600 grassroots blogs and the talk radio talent of Bill Bennett, Mike Gallagher, Michael Medved, Dennis Prager, and Hugh Hewitt, Townhall.com is the center of the conservative world online.

The Florida GOP understands that the Salem Radio Network and Townhall.com’s audience is full of Americans ready to contribute to – and volunteer during the election. We look forward to welcoming the candidates to the forum.

With the participation of the top candidates, millions of Americans will be able to turn to Townhall.com, tune into the Salem Radio Network and hear the candidates make their case to be the Republican presidential nominee.

In 2008 Republicans will nominate their standard-bearer for the presidential election and the process kicks in this summer at Townhall.com.

The Florida GOP has decided to support the debate, and as our efforts to bring you this debate continue, Townhall.com readers will be the first to know.