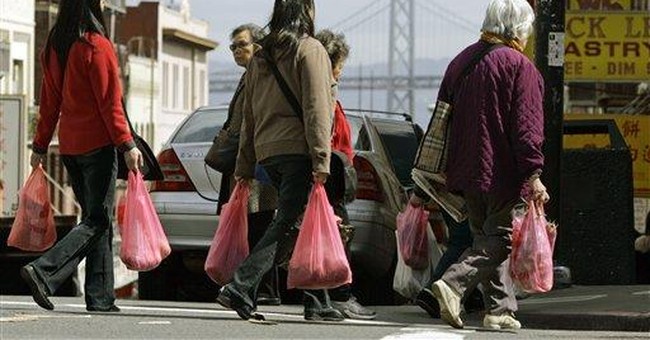 This week San Francisco became the first U.S. city to ban plastic grocery bags from city supermarkets and drug stores. San Francisco generates an estimated 180 million plastic bags each year, and the city counsel wants them gone. Grocery shoppers will have to find an alternative within six months.

Reducing the number of nonbiodegradable plastic bags tangled in neighborhood streets and piling up in landfills for hundreds of years is a noble undertaking, but San Francisco's government imposed bag ban is one more in a series of nanny state edicts from government upon the governed.

What's a "nanny state"? If you want a dictionary definition, "A government perceived as having excessive interest in or control over the welfare of its citizens, especially in the enforcement of extensive public health and safety regulations."

It happens all over the country.

San Francisco has an ordinance detailing how pet "guardians" are required to care for their dogs. Animal cruelty laws are a given but San Francisco goes a step further. Dogs in San Francisco must have clean water served in a nonspill bowl in the shade. Their food must be wholesome, palatable and sufficiently nutritious. Seems like common sense, but do we need laws to dictate the size and shape of our pets' food bowls? What's the penalty for being a lackluster dog owner? One thousand and/or up to one year in jail for a third offense.

New York City decided its citizens were too lazy to read food labels or to eat well and enacted a ban on trans fats from restaurants and vendors. Scientific research may back up assertions that trans fats are unhealthy, but so is half of everything in New York City. Are cheese fries OK to eat now? Of course not.

Cities like Washington, D.C., ban hand-held cell phones while driving when no data exists that using a cell phone while driving is more dangerous than using a hands-free unit. It's only a matter of time before the city council decides to mandate our hands be placed at 10 and 2 on the steering wheel for the sake of public safety.

City governments go from banning smoking in city buildings one day to banning smoking on the sidewalks the next. Several states are working on bans that prohibit driving while smoking if anyone under 18 is in the car. There's no question that secondhand smoke is harmful, but where is the appropriate limit for governmental intrusion into an individual's privacy? Is it really our intention to turn our already stretched-thin police departments into junior high hall monitors checking under restroom stalls for smokers?

And while you're not smoking on the sidewalks, you might also want to make sure you're not listening to an iPod when crossing the street in New York City, where some legislators are considering the need to ban earbuds. Their reason? Because three recent deaths were caused by distracted pedestrians. New York State Sen. Carl Kruger who spearheaded the effort claimed that "some type of electronic device was to blame." The iPod made me do it is the excuse of the moment, I guess.

A California assemblywoman proposed banning parents from spanking their children. The Texas governor proposed requiring all sixth-grade girls get a vaccine for the sexually transmitted HPV virus. And the list doesn't end there.

Nanny state laws and regulations are popping up all over the place. Government officials -- perhaps with too much free time -- can't stop themselves from brainstorming new and improved ways to protect us and coddle us through life.

They serve only to make government officials feel good that they are doing something about a problem and taking good care of their citizens -- like children. Shouldn't we expect more of ourselves and better from our elected officials?