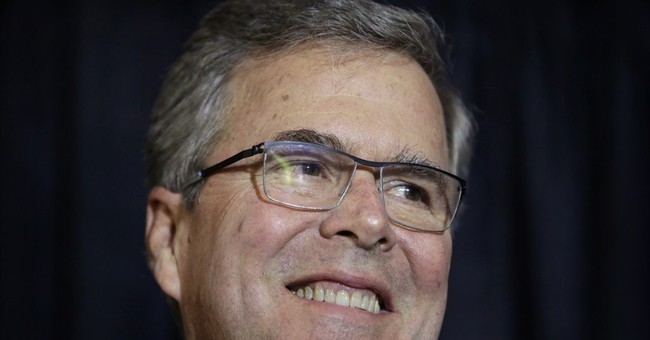 Let us now make the case for Jeb skepticism.

Jeb Bush is a fine man. He's a conservative. He was a highly effective conservative governor. He would probably make a fine president. And, if he were the Republican nominee, there would be precious few good arguments -- from a conservative perspective -- for sitting out the election, never mind voting for the Democratic nominee (whoever she may be).

But will it come down to that? And, more importantly, should it?

Let's start with the first question. It's definitely possible that Bush will be the nominee. He is raising a mind-boggling amount of money. He's doing well in the polls right now, though how much of that has to do with name recognition or the media-constructed aura of inevitability is unknowable. Some people like to back the winner early. Many in the press have been treating Jeb like the inevitable nominee for months. Maybe some of that rubbed off?

Still, Bush is not doing that great. He may be running nearly neck-and-neck with the front-runner, Wisconsin Gov. Scott Walker, but Walker and Florida Sen. Marco Rubio have much more room to grow. A recent Wall Street Journal/NBC News poll found that 42 percent of Republicans "couldn't see" themselves supporting Bush. That's not quite Donald Trump territory (74 percent of Republicans said they couldn't back him), but when nearly half of primary voters say they can't imagine supporting you, it's not an auspicious start.

Jeb lacks three advantages his brother had. First, the name "Bush" tested much, much better in the late 1990s. Second, as Bloomberg's David Weigel recently noted, George W. Bush was simply crushing Al Gore, the presumptive 2000 Democratic nominee, in head-to-head polling matchups -- often by double digits. When the goal is winning, people like to support the candidate most likely to win.

But they also like to support someone who isn't hostile to them, which is the third problem for Jeb. Unlike his father and his brother, Jeb has done next to nothing to court the base of the party. And, fair or not, many assume he's hostile to that base.

But let's say he manages to get the nomination. Is he the best candidate to run against Hillary Clinton? Jeb's losing to her in the polls right now (as are all the Republicans).

The Clinton name unifies Democrats while the Bush name divides Republicans. Moreover, Hillary's private email fiasco notwithstanding, the Clinton brand and Clinton era are more popular with most Americans than the Bush brand and the Bush era. Voters typically want a change after an eight-year presidency. But if the election becomes a contest between two tired brands, the more popular one (that at least promises the first female president) will probably win.

Jeb, it seems to me, is the one Republican candidate who makes the Clinton brand name an asset rather than a liability.

Beyond all of this branding stuff (which I hate), what are Hillary's specific vulnerabilities? Well, she's a weak campaigner, and foreign policy has been an utter disaster under the Democrats, particularly on her watch as secretary of state. If Jeb -- who is still quite rusty on the stump -- attacks her for botching the Russian reset, the rise of the Islamic State, the hegemonic spread of Iran, the destabilization of the broader Middle East, etc., Hillary can shoot back: "At least I didn't launch a disastrous war that created many of these problems, the way your brother did." It'd be a cheap shot, but cheap shots can be effective.

Now imagine it's Scott Walker or Marco Rubio. They offer the same attack. She tries to dredge up the Iraq War again. Walker can say, "Excuse me, Mrs. Clinton, I was the Milwaukee County executive when you voted for that war." Rubio can say something similar. (He was in Florida state legislature then.)

Obviously, Jeb has his strengths. He is a smart and capable man who is more than merely his last name. He may have skills and strategies (and certainly the money to augment them) that can compensate for his liabilities. But it seems obvious to me that the GOP needs a plausible "change" candidate.

Is that Jeb Bush? Maybe, but he's going to have to prove it to a lot of skeptics in his own party if he's going to earn the nomination.