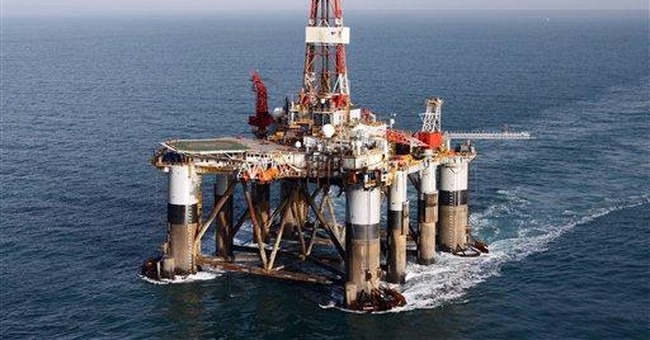 Too little, too late, too clever and for the wrong reasons. That's a good way to describe President Obama's decision to allow a little offshore drilling.

Of course, most of the environmentalist base of the Democratic Party sees it the other way around: too much, too soon (since "never" is their preferred timeline), too dumb but for the right reasons.

Obama justified his decision to allow drilling in the eastern Gulf of Mexico, the southern Atlantic and some coastal regions of northern Alaska on the grounds that it would create jobs and serve as a "bridge" to the carbon-free Brigadoon we've long been promised. The reality is that his decision was entirely political. Aiming to win vital Republican support in the Senate for some kind of bipartisan cap-and-trade legislation, he lifted the ban where the polling was in favor of doing so. Sound science, energy policy and economics were the last things on his mind. On that, there's widespread consensus.

Back when oil cost $140 per barrel, President George W. Bush lifted the executive ban on offshore oil drilling. Once elected, Obama quietly reinstated it. Since then, Obama's Interior Department has been doing just about everything it can to slow, hamper and prevent oil and gas exploration in the U.S. and offshore. There's no reason to believe the administration won't keep doing that. Besides, Obama's announcement actually bans more promising oil and gas reserves from exploration than it opens up: nothing in the Pacific, nothing in the western Gulf of Mexico, nothing in southern Alaska.

But there's an unintended irony to Obama's decision, one that he probably has not considered since the passage of health-care reform has only reinforced his ideological hubris. The welfare state that Obama is trying to create needs money, desperately. The federal debt is currently around $12 trillion, and the Congressional Budget Office expects it to hit $20 trillion by 2020. Throw in the unfunded liabilities -- i.e. promises to citizens -- in our existing entitlements system and the debt creeps over $100 trillion.

The American Enterprise Institute's Steven Hayward thinks this is something of a ticking time bomb for the left's overlapping coalition of environmentalists and welfare-state liberals. For years, environmentalists have been selling snake oil about energy policy, claiming that we can give up on nasty but affordable carbon-based energy such as coal, oil and gas, and embrace wind, solar and geothermal (but not nuclear!) for little to no cost. In fact, if you listen to people such as New York Times columnist Tom Friedman, switching to solar panels and wind farms will make us richer and more competitive, if not cause unicorns to poop "green jobs" and rainbows for as far as the eye can see.

Obama's arguments for health-care reform were similarly otherworldly. We can give 32 million more people coverage, without preconditions, and save money. It's already clear that this have-your-cake-and-eat-it-too pitch was bogus, as big corporations are announcing that ObamaCare will either cost them millions (if not billions) or force them to drop coverage.

It turns out that there's no free lunch, not on health care and not on energy policy.

And that's the irony. Obama and his Democratic successors will keep trying to squeeze the rich to pay for their schemes. But that won't raise anything close to the revenue they need. They'll try for a value-added tax, which will raise lots of money but also stifle growth. Eventually, if they want to avoid bankruptcy and keep the welfare state afloat, never mind pay for all of these environmental white elephants, they'll need more revenue, and that's where oil comes in.

Environmentalists who estimate that we only have six months' worth of oil in the Arctic or offshore don't know what they're talking about, because nobody knows how much untapped oil we have.

Many of the estimates are 30 years old, and they were made before radical leaps in seismic exploration and drilling technology. We could have tens of trillions of dollars worth of oil and gas under our soil or off our coasts. (One American Petroleum Institute study suggests that government revenues alone from untapped resources could be $1.7 trillion over 20 years.) Oil-industry jobs already pay twice the national average and are pretty much impossible to send overseas.

Fossil fuels aren't going anywhere for decades. Even if we don't drill, other countries certainly will. No country in the world with significant oil or gas resources is abstaining from exploiting them -- except for America. Environmentalists say that makes us a leader; the rest of the world says that makes us a sucker.