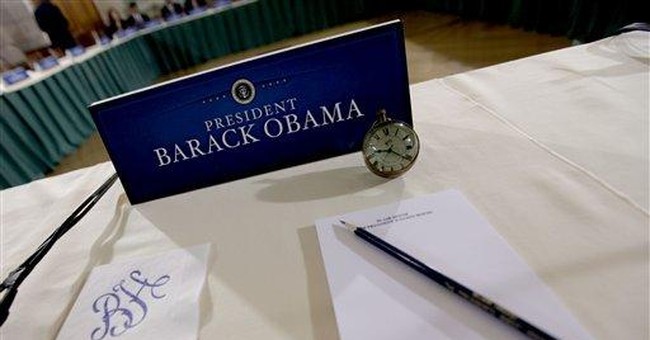 The longest week I ever spent was the six hours I spent watching Thursday's health-care summit.

The better angel of my nature says that this confab is a wonderful spectacle of democracy. Serious men and women airing serious disagreements in a (relatively) respectful and substantive manner. Huzzah for democracy. Wahoo for C-SPAN. Attaboys and attagals to all involved.

My more devilish side says that this is a debacle par excellence, the policy-wonk equivalent of a show trial where the result is foreordained and the speeches are for the benefit of no one but those who don't understand what's really going on while the posturing is for the handful of Kremlinologists who care passionately about minutiae.

More to the point: It was mind-bogglingly, soul-achingly, sand-poundingly, metaphysically and ontologically boring. It's like driving through Kansas on the interstate (something I've done many times): long, vast stretches of boredom punctuated by the occasional brief promise of excitement that would require detouring from the planned route.

It reminds me of that old Monty Python skit where British soldiers are equipped with the world's funniest joke, a joke so funny that even to hear it guarantees you'll die laughing. The British army translates the gag into German (different translators for each word so as to prevent their own deaths), and has its troops read the German version as they march through Ardennes forest. Suddenly, Nazi soldiers start falling dead from the trees.

Substitute "boring" for "funny" and you'll get a vague sense of how dull this summit was.

At one point I could swear Mitch McConnell was counting fibers in the carpet just to stay awake.

For months, Republicans have fairly tagged President Obama for breaking his promise to put health-care negotiations on C-SPAN. That talking point was rendered moot Thursday. But now there's a better talking point: The summit showed why Obama was crazy for wanting to televise this stuff in the first place. Real negotiations never happen in front of cameras because to cut a real political deal in public is the political equivalent of cutting your own throat.

Now, just because the scripts were written beforehand doesn't mean that everyone's lines worked. Obama opened by striking a pose of plausible fairness and open-mindedness but grew more and more snarky (to use a technical political-science term) and less presidential as the event wore on. Obama's condescension to John McCain -- "we're not campaigning any more, the election's over" -- pleased everyone who already loves him and nobody who doesn't.

House Speaker Nancy Pelosi relied on the Democrats' favorite rhetorical gambit: policy-by-anecdote. Invoking the sad plight of some person no one knows can be effective, but we've been hearing such stories for a very long time, even as support for Pelosi's solutions has plummeted.

But it was Senate Majority Leader Harry Reid, mugging for his doomed re-election bid at home, who put the ugliest face on the Democratic Party. Cranky, mean and short-tempered, Reid seemed like he was sitting on a carpet tack throughout the discussion. He snapped that "no one is talking about reconciliation" -- a reference to the arcane parliamentary procedure Democrats are considering as a means to ram their unpopular bill through Congress.

That's true, save for the more than 100 House Democrats and more than 20 Senate Democrats who had already signed letters calling for reconciliation. His crotchety dyspepsia combined with arrogant dishonesty made the leader of the Senate seem like the sort of oldster who would pinch little kids for fun if he could get away with it.

The Republicans were arguably more boring than the Democrats precisely because they had to seem nicer. (Iowa Sen. Tom Harkin, who bizarrely played the race card, had no such concerns.) But when Sens. Lamar Alexander, Jon Kyl and Tom Coburn weren't contemplating committing seppuku like that Japanese soldier in "Airplane!" just to end the ennui, they succeeded in undermining the central talking point of the Democrats: that the Republican Party has no ideas on health care.

It may have been excruciatingly dull enough to force Osama bin Laden from his cave, but the Republicans patiently telegraphed an inconvenient truth: They do care about health-care reform, they just loathe Democrats' version of it (and, yes, have much to gain by blocking it). At halftime and again afterwards, when delegates were no doubt mainlining Red Bull, the Democrats' spinners took to the airwaves to insist that the Republicans "don't want anything." But anyone watching knows that's not really true.

That is, if anyone was watching.