Obama Appears Blinded by His Own Ideological Biases 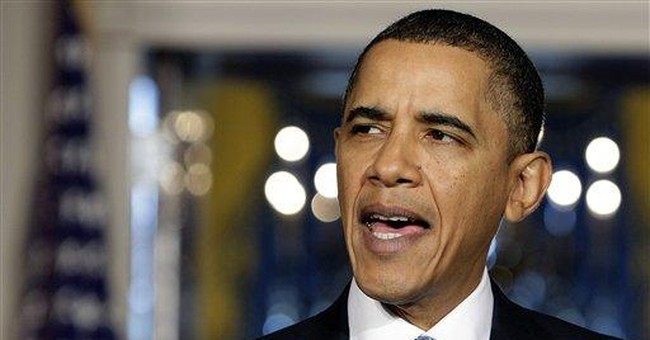 "I am not an ideologue," President Obama insisted at his truly refreshing confab with the Republican caucus in Baltimore last Friday. When he heard some incredulous murmurs and chuckles from the audience in response to the idea that the most sincerely ideological president in a generation is no ideologue, he added a somewhat plaintive, "I'm not."

The president's defensiveness isn't surprising. He holds his self-definition as a pragmatist dear, and not just because it polls well.

It's clear from interviews that he is fond of the notion that he is above ideological squabbles and is a clear-eyed appraiser of facts and adjudicator of political disagreements. He's described himself as a "pragmatist," even a "ruthless pragmatist," countless times.

The evidence offered that Obama is no ideologue rests almost entirely on two contentions: He has annoyed some members of his ideological base, and because he says so.

Here, for instance, is New York Times columnist David Brooks, an Obama confidant and champion of Obama's nonideological street cred, asserting that Obama is loyal only to facts, evidence and logic (a theme Obama echoed in his Q&A with the GOP). Obama, Brooks writes, "is beholden to no ideological camp, and there is no group in his political base that he has not angered at some point in his first year."

If this gruel were any thinner, it would be water. Every president annoys his base. Are we therefore to believe that no president has ever been an ideologue? And how has Obama angered his base? Not by tacking to the center but by not going fast enough in pursuit of their shared goals.

As for Obama's personal testimony, so what? Is this the one instance in American history when a politician's self-serving statements are to be taken at face value? Besides, how many times have we heard from the left that right-wing ideologues are in denial about what "really" drives them (the answer, we're frequently told: greed, racism, homophobia, etc.). Is denial only a conservative malady? Certainly not.

Of course Obama is an ideologue. The important question is whether he is sufficiently self-aware to recognize the truth.

I, for one, would be horrified to learn that the president is working from the assumption that ideological biases are something only other people have. That is the surest route to hubris and groupthink (which might explain Obama's political predicament).

Obama routinely insinuates that all of the facts are on his side. He invokes a confabulated consensus of experts to suggest that there is no legitimate reason for anyone to disagree with his agenda. After all, with the eggheads and "facts" in his corner, only the other side's ideological blinders -- or stupidity -- could account for any dissent.

On health care, for instance. Obama promised to be the last president to ever grapple with health care, because his reforms would be so sweeping, so authoritative, that no such reforms would ever be necessary again. So far, Obama's only concession of error in this fiasco is his failure to "explain it better."

What I really don't understand is what's so great about allegedly value-free pragmatism and so bad about supposedly unthinking ideology? The truth is that the vast majority of the time, pragmatism isn't value-free and ideology isn't unthinking.

Ideologies don't require blinding yourself to the facts; rather, they help you prioritize what you are going to do with the facts. Indeed, the very question of deciding what to be pragmatic about -- this but not that -- requires applying an ideological test.

The president invokes his or America's "values" to justify a ban on waterboarding, passage of universal health care, sustaining legalized abortion, higher taxes for the wealthy, gay equality and -- coming soon -- a more expedient system for selecting a college football champion. Those all involve pursuing ideological ends, even if that fact is obscured with rhetorical blather about pragmatic means.

A truly "ruthless pragmatist" might opt for summarily executing enemy combatants after torturing them with hot pokers. He might abandon anyone who can't afford health insurance. He might ban abortion on the grounds that Social Security needs more young people or eliminate college football entirely as a needless distraction and a drain on resources.

The philosopher Bertrand Russell wrote in 1909 that if everyone becomes a pragmatist, then "ironclads and Maxim guns must be the ultimate arbiters of metaphysical truth." Russell's point was that there's nothing within pragmatism to delineate the proper and just limits of pragmatism. We must look outside pragmatism for that.

Our values, customs, traditions and principles provide the insulation against the corrosive acid of undiluted pragmatism. When you bundle these things together, it's often called an ideology, and there's no reason to apologize for having one.