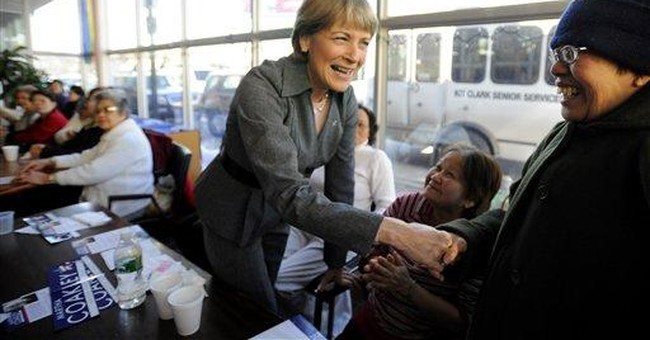 In August, Ted Kennedy, the Lion of the Senate, the last son of Camelot, the soul of the Democratic Party, friend of the people and scourge of robber barons, fat cats and special interests, departed this mortal coil.

Now, that's not really my opinion of the man. But if you were inclined to imbue Tom Brokaw with pontifical authority or view the world through the prism of the New York Times, or its mini-me the Boston Globe, that's how you'd see Teddy.

So it should be of more than passing interest that "Ted Kennedy's seat" in the Senate may go to Republican Scott Brown next week. And not just any Republican, but an actual conservative, as opposed to some me-too Republican who promises to drive in the same direction as liberals.

Not long ago, Brown was down 30 points to Massachusetts Attorney General Martha Coakley. Now it's neck and neck, according to many polls. Brown is still the underdog, but the fact that it is even close is in itself hugely significant. It's a bit like Tibet holding its own against China in a land war, or Abe Vigoda giving Tiger Woods a run for his money at Augusta (or, for that matter, at a Vegas nightclub).

Even more astounding, Brown is running directly against what everyone agrees was Ted Kennedy's signature issue and legacy: health care reform. Massachusetts is the most famously Democratic state in the union. Barack Obama's presidency and the Democratic congressional majority are invested in health care reform like a Bernie Madoff victim, and Brown is surging by running as the monkey wrench for the whole thing.

This is like a Democrat successfully running in Texas on tax hikes, gay marriage and funding the Pentagon solely through bake sales.

The Democratic Party is panicking like brothel patrons with the cops at the door. They're dropping shock troops of muckety-mucks, hacks, spinners and door-knockers into Boston like Rangers into Normandy.

Meanwhile, the liberal press establishment is in near-total denial. Yes, the race is getting a lot of attention, but Coakley's problems are being chalked up to the fact that she is a bad campaigner and that this is a bad "climate" for the Democrats.

They use "climate" to suggest that things are bad for Democrats for reasons beyond their control (ironically, they don't talk about the climate that way when it comes to global warming). Orange growers in Florida can't be blamed for a bad crop if the climate won't cooperate, and Democrats can't be held accountable for their crop failure now. It's the economy! It's the obstructionism of the Republicans and that satanic whatchamacallit, the filibuster. Jupiter is aligned with Mars, NutraSweet has poisoned the water supply, "Lost" has been on hiatus too long, Mongo likes candy: It's the climate, you see, the horrible, horrible climate! Democrats didn't do anything wrong!

The Democrats' "bad climate" is a direct result of how they've governed. The populist backlash is fueled by a sense that Democrats are acting on their preferred agenda and by their own rules. From the shenanigans of the people who write our tax code and collect our taxes to special deals and secret arrangements for big businesses and legislators who play ball, the Democrats have abandoned transparency in favor of transparent arrogance.

Coakley is a creature of this climate. She hasn't been running for "Ted Kennedy's seat," she's been strolling to it like someone who knows it's been reserved for her and all she needs to do is swing by the will-call window to pick it up.

"The people of Massachusetts" are an abstraction whose assigned role is to ratify her entitlement to that seat. As for the actual citizens of the state her campaign can't be bothered to spell correctly in campaign ads? By all means, keep them at a safe distance.

When asked if her campaign style is too aloof, she snapped back: "As opposed to standing outside Fenway Park (the way Scott Brown does)? In the cold? Shaking hands?"

Heaven forfend the royal heir apparent descend from her carriage and actually touch the prols.

Brown has raised vast sums through the sorts of small donations that allegedly made Obama a man of the people. But Coakley attacks his fundraising as the tainted lucre of right-wing ogres lurking under America's bridges (bridges no doubt paid for with stimulus dollars), while she shakes down health-care lobbyists eager to cash in on the "reform" she will ratify.

Coakley may still win. But Democrats should be on notice: The fault for her sad performance lies not in the climate, but in themselves.