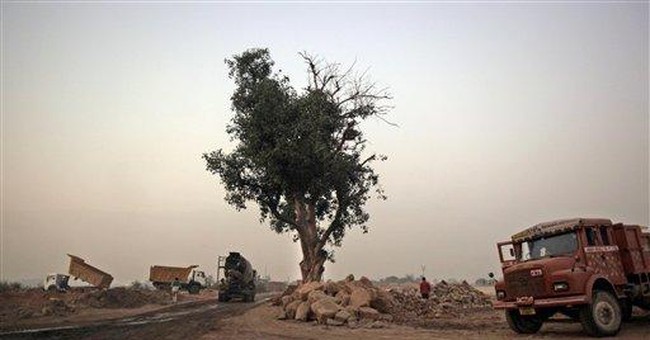 Next week's Copenhagen summit on climate change already seems doomed to failure, and voices on both sides of the global-warming debate are trying to pin the blame on Climategate. Republicans on Capitol Hill are trying to use Climategate to scuttle the Democrats' cap-and-trade legislation. Even the Saudis -- who like fossil fuels even more than Tiger Woods likes the ladies -- are getting in on the act, saying the scandal casts the entire case for global warming in doubt.

"Climategate," aka warmerquiddick, aka the CRUtape letters, aka the Mother of All Publicity Disasters, refers to the leaking of vast numbers of e-mails and other documents from a leading British global-warming outfit, the Climatic Research Unit. The e-mails show, depending on your outlook, anything from sloppiness, pettiness and dishonesty to outright fraud among some of the world's leading climate scientists.

Climategate is a big deal, but we should be clear: It's not why cap-and-trade should be scuttled, and it's not why Copenhagen will produce nothing, save enormous expense-account submissions for cookie-pushing climate diplomats (and a massive amount of greenhouse gases; the U.N. estimates the 12-day "green" confab will produce 40,584 tons of CO2 equivalents, roughly equal to Morocco's carbon footprint in 2006).

Here is one simple, inconvenient truth: No developing country with significant and remotely accessible stocks of fossil fuels will agree to leave the stuff in the ground.

"Ten countries ruled by nasty people control 80 percent of the planet's oil reserves -- about 1 trillion barrels, currently worth about $40 trillion," writes energy expert Peter Huber in City Journal. "If $40 trillion worth of gold were located where most of the oil is, one could only scoff at any suggestion that we might somehow persuade the nasty people to leave the wealth buried. They can lift most of their oil at a cost well under $10 a barrel. They will drill. They will pump. And they will find buyers. Oil is all they've got."

And it's not just the nasty countries. Canada, the Dudley Do-Right of the international community, insists on exploiting its vast and dirty oil reserves in the so-called "tar sands" under Alberta. The intro to an article by British eco-scold George Monbiot declared: "Canada's image lies in tatters. It is now to climate what Japan is to whaling." If Canada, which has long been the U.N.'s Richie Cunningham, won't play ball, does anyone think the Chinese, Indians or Brazilians will?

Here's another inconvenient truth: The United States will not agree to draconian carbon caps either, for the simple reason it would be political suicide for all but a handful of politicians. Unless you represent hyper-wealthy liberal enclaves or the ethanol moonshine industry, it makes no sense to vote for anything like cap-and-trade.

That's why the Kyoto Protocol never made it out of the crib in the United States.

It was often said that President George W. Bush "refused to sign the Kyoto Protocol." This is technically true -- because Bush couldn't sign Kyoto. It was already signed during the Clinton presidency (Bush didn't sign the Treaty of Versailles either). The important point is that Clinton immediately shoved it in his desk drawer because he knew it would never be ratified by the Senate. Indeed, the Senate voted 95-0 to not even consider ratifying it so long as developing countries like China were left out of the scheme. (See inconvenient truth No. 1.)

Overlooked by the mobs who decried Bush's "treason against the planet" (to borrow a phrase from Paul Krugman) is the fact that Barack Obama has opted to stay out of the Kyoto system for the same reason. Making carbon fuels more expensive for us while not making them more expensive for China and Co. means that fossil-fuel users will move their businesses to the developing world even faster while costs and taxes for consumers will skyrocket.

While it's great fun -- and entirely worthwhile -- to make a big stink about Climategate, it would be a shame if people believed that Copenhagen's inevitable failure hinged on this one scandal. Even if the CRU researchers were the model of scientific dispassion, these schemes are pointless. Indeed, even if global warming is the threat the alarmists claim it is, it makes no sense to waste trillions of dollars on "fixes" that will do little to fix the alleged problem.

It's time to start over, beginning with the science.

Hypocrisy: Teachers Union Boss Posts Shameless 'Self-Own' Photo
Guy Benson
This Is How Minnesota's Democratic Governor Responded to New Round of Riots In the State
Julio Rosas
Here is How Raphael Warnock Misled the Public Over Georgia's Voting Reform Bill
Reagan McCarthy
Even Harry Reid is Warning Against This Far-Left Idea