It's No Way to Fight a War On Terror 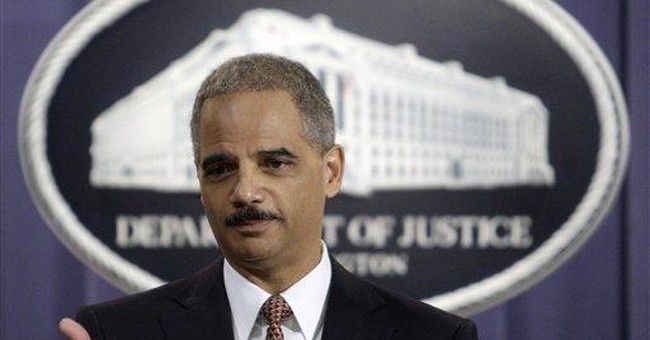 I get where President Obama and Attorney General Eric Holder are coming from. They think that if we change our way of life, the terrorists will have won.

In principle, I agree. If upholding our values makes fighting the war on terror harder, then it should be harder.

That's why I don't care much that it will cost more money to try suspected terrorists in the Big Apple than it would in the state-of-the-art facility at Guantanamo Bay. Similarly, while the security concerns stemming from a trial in New York are real, I think we can handle them. And, again, just because something is harder or more dangerous, that doesn't necessarily mean we shouldn't do it. That's the whole point behind "millions for defense but not one cent for tribute." Some things just aren't for sale.

Nonetheless, I think the decision to send Khalid Shaikh Mohammed and his buddies to a civilian trial is a travesty.

Ultimately, the disagreement is one of first principles. If we are at war, then the rules of war apply. The fact that this is a war unlike others we've fought should not mean that it isn't a war at all.

Don't tell that to Obama. He's made it clear that he doesn't see the threat as an unconventional war but as a conventional law-enforcement problem. The attorney general insists that 9/11 is a matter for civilian courts. Homeland Security Secretary Janet Napolitano says attacks such as 9/11 should be thought of as "man-caused disasters." Her top priority after the Fort Hood shootings was to bring Maj. Nidal Malik Hasan to justice -- a fine answer for a law-enforcement official but not from someone charged with protecting the homeland. The war on terror itself has morphed into "overseas contingency operations."

Just as telling, Obama insists that the decision to move Mohammed to civilian court was entirely Holder's. This is deceptive nonsense. Even if technically true, the choice to let Holder make the decision was the real decision. The commander in chief opted to hand off jurisdiction over enemy combatants to the cops. He can't duck that responsibility by saying it wasn't his call.

But there's a more immediate problem. This won't be a show trial, strictly speaking. But it will be a trial for show.

Prominent defenders of the decision insist that this trial is at least partly to benefit America's image around the world. That's a laudable goal -- and another example of why this is not a mere law-enforcement issue. But I'm dubious that will be the result.

Sen. Jack Reed (D-R.I.) defended the administration Sunday on Fox News, echoing suggestions from the White House that even if the accused are acquitted on a technicality, they won't be released. They would go back to the legal purgatory known as "preventive detention." That is the right policy; these are dangerous men, after all. But it is an affront to civilian jurisprudence. Under military law, preventive detention is a well-established norm. Under civilian law, it's an affront.

Throw into the equation that these men weren't read their rights, were interrogated in a manner that is illegal in civilian courts, are being tried with little if any possibility of an impartial jury -- and the fact that Holder all but insists they'll be convicted -- and it all adds up to a farce.

Moreover, the administration has not abolished military tribunals. Holder is sending the al-Qaida suspects in the attack on the destroyer Cole to one. Hence, enemies who attack us abroad are treated like enemy combatants with fewer rights, while terrorists who managed to kill civilians here at home are treated like American citizens. That is perverse.

If history is a guide, this trial will unavoidably come at a cost in terms of leaked intelligence and propaganda victories for our enemies.

Obama's defenders don't believe it. "Does anyone think," asks Joshua Micah Marshall, a prominent liberal blogger, that the "Nuremberg trials ... advanced (the defendants') causes?" Obama himself invoked the Nuremberg trials during the presidential campaign. "Part of what made us different was even after these Nazis had performed atrocities," he explained, "we still gave them a day in court, and that taught the entire world about who we are but also the basic principles of rule of law."

Such arguments are revealing on at least two counts. First, the Nuremberg trials were military tribunals -- it was understood that the Nazis were not mere criminals.

Second, they took place after we had won the war against Nazi Germany. We could afford such a spectacle because the Nazi cause was dead.

Meanwhile, the war on terror lives. Just don't tell that to Barack Obama.