Regime Is Iran's Disease; Nukes Are Just a Symptom 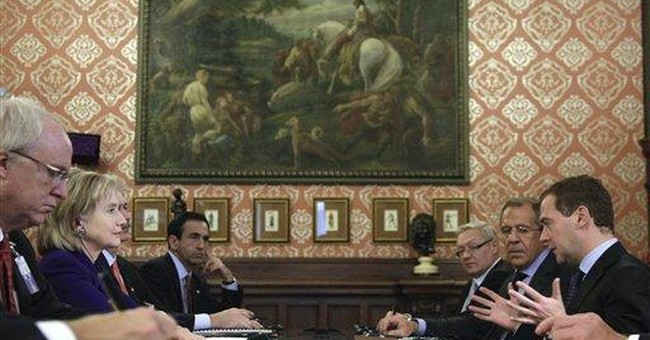 The Nobel Peace Prize has renewed prestige in my book. No, not because Barack Obama won it for accomplishments to be determined later. It's got new luster because Shirin Ebadi has, at great personal risk, effectively come out for regime change in her native Iran.

Ebadi, who won the Peace Prize six years ago (under the old rules whereby recipients were expected to do something to earn the prize before receiving it), is Iran's premier human rights lawyer. In an interview with the editors of the Washington Post, Ebadi "suggested that the nature of Iran's regime is more crucial to U.S. security than any specific deals on nuclear energy."

Her point is precisely the same point made by so-called neoconservatives for years. The problem with Iran is its regime; its nuclear program is merely a symptom of that problem.

Do you lay awake at night worrying about Britain's nuclear weapons? France's? Israel's? Of course not, because stable democracies in general, and stable democratic allies in particular, aren't a threat.

It's a profound and fundamental point. We've gotten many such promises from the North Koreans. They are worthless. Promises from oppressive regimes cannot be trusted any more than promises from Tony Soprano could be. If a government is willing to betray its own people on a daily basis, what makes anyone think that it won't betray its geopolitical adversaries?

A democratic Iran, Ebadi says, would be unlikely to pursue a nuclear program. The Iranian people fear sanctions more than the country's corrupt, economically insulated rulers do. Moreover, the Iranian regime needs nukes for its own survival. The Iranian people may like the prestige of being a member of the nuclear club, but they aren't eager to pay any price to join. More important, the Iranian people aren't interested in preserving the current regime, as has been demonstrated by the historic protests this summer.

But even if Iran did go nuclear, who really cares as long as the nutty, messianic, totalitarian leadership is gone? A stable, democratic regime concerned with economic growth and normalcy might not be perfect, but which sort of government would you rather see in charge of nuclear weapons?

Democracy is not necessarily a cure-all. Palestinians in Gaza held elections and swept Hamas to power. But the Iranians aren't Gazans. And while America is despised by most nations in the region, the U.S. is actually popular with the Iranian people.

Ebadi doesn't want America to topple the Iranian regime the way it toppled Saddam Hussein's. Or, if she does, she's certainly smart enough not to say so outright, given that her family is under constant surveillance by Iranian authorities. What she wants is for America to get its priorities straight. Iran, which has been sponsoring terror for 30 years, is a threat because the Iranian regime is a threat. Change the regime and the threat diminishes or vanishes instantaneously. We had a golden opportunity to accelerate regime change in June, but Obama blinked.

Enamored with the idea that "engagement" with evil will produce good, and convinced that a brutal, undemocratic regime is the legitimate representative of the Iranian people, Obama was slow to recognize the moral authority of the democracy movement. By the time he did say what he should have said at the outset, it was clear that his grudging and qualified support for the protestors had no steel to it. The Iranian regime recognized that it would have a free hand to murder and intimidate its own people in order to reconsolidate power after it stole the election. This was a sad moment for the leader of the free world. "Mr. Obama has extended the hand of friendship to a man who has blood on his hands," Ebadi told the Post. "He can at least avoid shaking the hand of friendship with him."

There are rumors -- unconfirmed at this point -- that the Supreme Leader of Iran, the Ayatollah Khamenei, is either dead or in a coma. If true, the resulting power vacuum might give Obama the chance for a do-over. That is, if he's interested in earning a peace prize, not just winning one.