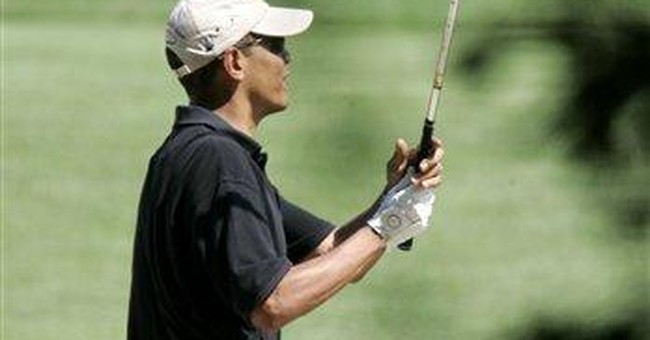 The fight over health care took the most interesting turn last week. President Obama briefly switched from wonkish frippery about bending cost curves to speaking of faith. Reaching out to progressive faith leaders in two massive conference calls, Obama insisted that God was on his side. Expanding health care fulfills a "core moral and ethical obligation that we look out for one another ... that I am my brother's keeper, my sister's keeper."

This would be an easy opportunity to call attention, once again, to the double standards applied to Obama. When President George W. Bush invoked God as his inspiration, many liberals saw our theocrat-in-chief taking a sledgehammer to the wall between church and state. When Obama does likewise, it's inspiring, spiritual leadership.

But, frankly, I find it refreshing.

Of all the silly arguments that have been passed off as deeply profound in American politics, the notion that politicians can't "impose" their personal morality on others tops the list.

We have abortion politics in general, and former New York Gov. Mario Cuomo in particular, to thank for that. In 1984, Cuomo gave his famous address at Notre Dame in which he laid out the notion that a politician can be "personally opposed" to abortion but should refuse to translate that conviction into public policy. As political rhetoric, the speech was compelling. As a serious philosophical, theological or moral argument, it was a mess. For instance, Cuomo found inspiration in the Catholic Church's relative silence on American slavery as justification for keeping religion out of the abortion debate. Never mind that abolition was the most religious of political movements.

"It is a mark of contemporary liberalism's commitment to abortion," Ramesh Ponnuru writes in "The Party of Death," "that one of its leading lights should have been willing to support temporizing on slavery in order to defend it."

The main problem with Cuomo's sophistry is that, once watered down into political talking points, it's simply ludicrous.

In 2004, another Catholic Democrat captured the inherent contradictions of Cuomo-ism nicely in a presidential debate. John Kerry insisted that his faith was "why I fight against poverty. That's why I fight to clean up the environment and protect this Earth. That's why I fight for equality and justice. All of those things come out of that fundamental teaching and belief of faith."

But he also said that, when it came to abortion, "What is an article of faith for me is not something that I can legislate on somebody who doesn't share that article of faith."

The statements cannot be reconciled. By Kerry's own admission, he seeks to legislate his articles of faith on people on nearly every issue under the sun -- except abortion. Suddenly, on that issue alone, he is an adamantine secularist.

But in recent years, Democratic rhetoric has been changing, for several reasons. One, many voters are put off by such double-talk. Another reason is that many smart liberals have noticed that some religious Americans are more activist on economic and environmental issues but are turned off by what they perceive as pugnacious secularism.

During the last presidential campaign, Hillary Clinton was comfortable speaking the language of the social gospel movement, historically the religious wing of American progressivism. But Obama was even better. Speaking during the campaign at an evangelical church in South Carolina, he said, "I am confident that we can create a kingdom right here on Earth." He supported Bush's Office of Faith-Based and Community Initiatives and kept the agency when he took over, albeit with a slight name change. He courted evangelical pastor Rick Warren. His social agenda, went a constant refrain, was deeply informed by the injunction that we "are our brother's keeper, our sister's keeper."

Leaving aside the fact that the Bible nowhere says we should be our brother's keeper (the phrase appears once -- when Cain is trying to dodge a murder rap from God) or my own view that the government should never see itself as a keeper of anyone but incarcerated criminals (my dictionary says keepers are prison guards and zoo wardens), I think Obama's approach is a welcome change of pace.

Politics has always been a contest of values, and religion remains the chief source of those values. Our political discourse has long been cheapened by the canard that only conservatives try to use the state to impose a religiously informed moral vision, while liberals are guided by science, reason and logic as well as some secular conception of decency and compassion. No party has a monopoly on such resources, and it's about time we all recognized that.