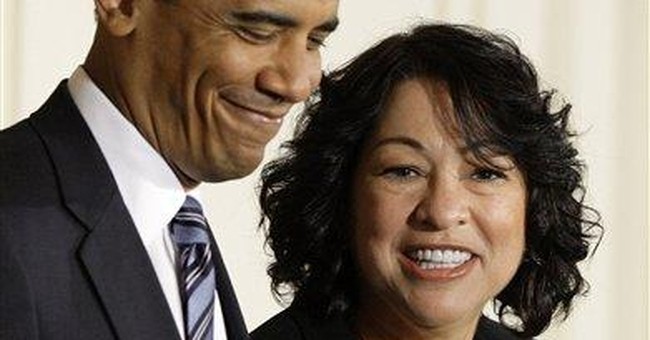 Why make this complicated?

"I, (name), do solemnly swear (or affirm) that I will administer justice without respect to persons, and do equal right to the poor and to the rich, and that I will faithfully and impartially discharge and perform all the duties incumbent upon me as (title) under the Constitution and laws of the United States. So help me God."

Contrast that with Obama's insistence that the "quality of empathy, of understanding and identifying with people's hopes and struggles" is the key qualification for a Supreme Court justice. According to White House talking points, Judge Sotomayor's "American story" of humble origins -- she was raised in the South Bronx -- best prepares her for the high court because it shows "she understands that upholding the rule of law means going beyond legal theory to ensure consistent, fair, common-sense application of the law to real-world facts."

Obama says law and precedent should determine rulings in "95 percent of the cases." But in the really hard and important cases, justices should go with their heart. "In those cases, adherence to precedent and rules of construction and interpretation will only get you through the 25th mile of the marathon. That last mile can only be determined on the basis of one's deepest values, one's core concerns, one's broader perspectives on how the world works, and the depth and breadth of one's empathy."

Now, keep in mind that 5 percent of Supreme Court cases isn't everything, but it's nearly 100 percent of what we argue about as a country. For the hard cases Americans care most about, Obama says empathy should rule.

So, what's wrong with empathy?

Well, nothing. Empathy is a fine thing, and all decent people should employ it, including Supreme Court justices.

But Obama has something specific in mind when he talks about empathy. He wants the justice's oath to in effect be rewritten. Judges must administer justice with respect to persons, they must be partial to the poor, and so on.

I don't think this is open to much debate. When Obama voted against Chief Justice John Roberts' confirmation, he said that Roberts didn't have the "heart" to vote the right way in those 5 percent of cases. Rather than Roberts the Cruel, Obama explained, "we need somebody who's got the heart -- the empathy -- to recognize what it's like to be a young teenage mom. The empathy to understand what it's like to be poor or African-American or gay or disabled or old -- and that's the criteria by which I'll be selecting my judges." Cue Sotomayor the Empathic.

The reasoning here is a riot of dubious assumptions. Obama and Sotomayor both assume that a firsthand understanding of the plight of the poor or the African-American or the gay or the old will automatically result in justices voting a certain (liberal) way. "I would hope," Sotomayor said in 2001, "that a wise Latina woman with the richness of her experiences would more often than not reach a better conclusion than a white male who hasn't lived that life." This is not only deeply offensive, it is also nonsense on stilts. Clarence Thomas understands what it is like to be poor and black better than any justice who has ever sat on the bench. How's that working out for liberals?

Of course, liberals say that if you don't agree with their policy prescriptions on, say, racial quotas or abortion, it's because you don't care as much as they do about minorities or women. Which is why they've demonized Thomas as a villainous race-traitor. This, too, is aggressively stupid. But even if it were true, why are we talking about policy preferences and the courts? Judges aren't supposed to have policy preferences, despite Ms. Sotomayor's insistence that the courts are "where policy is made."

More important, who says conservatives are against judicial empathy? I, for one, am all for it. I'm for empathy for the party most deserving of justice before the Supreme Court, within the bounds of the law and Constitution. If that means siding with a poor black man, great. If that means siding with a rich white one, that's great too. The same holds for gays and gun owners, single mothers and media conglomerates. We should all rejoice when justices fulfill their oaths and give everyone a fair hearing, even if that's now out of fashion in the age of Obama.