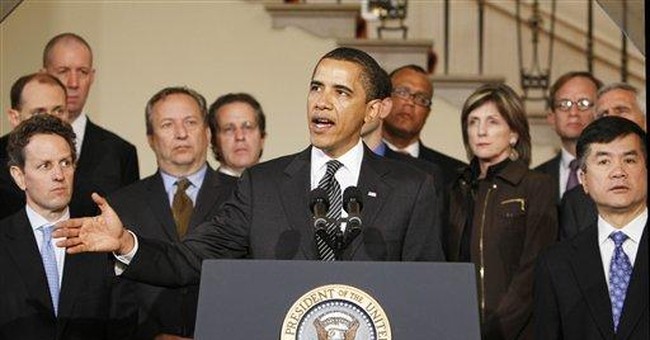 Asked about his decision to release the "torture memos" and ban waterboarding, Obama said: "I was struck by an article that I was reading the other day talking about the fact that the British during World War II, when London was being bombed to smithereens, had 200 or so detainees. And Churchill said, 'We don't torture,' when ... all of the British people were being subjected to unimaginable risk and threat. ... Churchill understood, you start taking shortcuts, over time, that corrodes what's best in a people. It corrodes the character of a country."

It's a nice, honorable statement. But there's not much evidence it's true.

It's unconfirmed, but the article Obama referred to is probably a combination of a 2006 op-ed by Ben Macintyre in the Times of London and a recent blog post about it by the Atlantic's Andrew Sullivan. Macintyre focused on British Col. Robin "Tin Eye" Stephens, the wartime commander of Camp 020 whose motto was "never strike a man," a code he didn't always succeed in enforcing. But even many of Stephens' preferred techniques -- sleep deprivation, psychological cruelty, etc. -- are routinely denounced as "torture" by Bush administration critics like Sullivan.

Macintyre doesn't mention Churchill. That's all Sullivan, who writes: "Churchill nonetheless knew that embracing torture was the equivalent of surrender to the barbarism he was fighting."

Typically, Sullivan's emotions are getting ahead of his facts. Churchill's preference for humane treatment of German POWs under the Geneva Conventions had more to do with ensuring reciprocity from enemy armies. Al-Qaida isn't a signatory and isn't interested in such reciprocity.

One reason Churchill might have eschewed putting the screws to detainees in 1942 is that he already knew what they could tell him about the bombings. The Allies knew where the airbases were and had cracked German codes years before.

Regardless, Churchill and Great Britain didn't quite take the firm stand against "torture" that Obama and Sullivan suggest. During the war, the Brits ran an interrogation center, "the Cage," in one of London's fanciest neighborhoods, where they worked over 3,573 captured Germans, sometimes brutally. The Free French movement, headquartered in London, savagely beat detainees under the nose of British authorities. From 1945 to 1947, Col. Stephens himself ran the Bad Nenndorf prison near Hanover, Germany, where Soviet and Nazi prisoners were treated far more brutally than those at Guantanamo Bay. Stephens was court-martialed, and cleared, for some of the alleged atrocities.

Of course, none of this remotely made Britain "equivalent" to Nazi Germany.

Regardless of the debatable facts, the real problem is this idea that "taking shortcuts" erodes the character of a people. One hears this constantly, but it is almost invariably asserted rather than demonstrated.

First, this argument assumes society knows about the shortcuts. After all, if the shortcut in question is kept a secret, then it's hard to see how the "character of a people" will be corroded (or that such methods will be used as a "recruiting tool"). Alas, the idea that the government should be able to do things in secret to fight a war is out of vogue today.

The more significant shortcuts are the public ones people can't ignore. Churchill ordered the firebombing of Dresden just 12 weeks before the end of World War II. No one knows for sure how many civilians were burned alive, but tens of thousands surely were, in no small part to deliver a psychological blow to the Germans. If Churchill could have waterboarded a prisoner to avoid that -- or stop the Holocaust -- would one shortcut have been preferable to the other? Why? Or why not? Obama gives no sense he has an answer to such questions. You can ask the same questions about the shortcuts that flattened Hiroshima and Nagasaki.

Did these shortcuts erode the character of the American and British people? If so, how? And what does it say about the "greatest generation" Barack Obama invokes relentlessly? And, again, what of the shortcuts we don't know about?

Churchill was a heroic leader. He did right as best he could in a bloody mess of a war. But he made countless horrible-but-correct decisions in the process. For instance, he refused to warn residents of Coventry that the Nazis were going to bomb, lest he betray the secret that he was listening to Nazi cable traffic. After the war, he advocated the shortcut of summary executions of Nazi officials.

It might seem otherwise, but I'm not making the case for what some people see as torture. I'm simply noting that war is always about shortcuts, all are horrible, some are necessary. If Obama doesn't understand that, let's hope he never has to learn it.