(Right) Winging it At the Dems 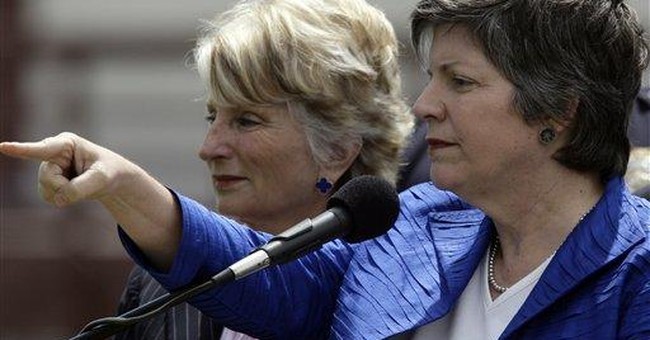 I had no idea there even was an ERBHETAD of the DHS working on the RECEPCFRRR.

Who among us doesn't feel safer already?

The problem with it is that it makes little effort to document or demonstrate its contention that "extremist" groups are resurgent, that they are right-wing, or that they may be formed from the ranks of "disgruntled military veterans." Worse, it's very sloppy about what qualifies someone as "extremist" in the first place. Basically, it's fancy bureaucratese for: We're guessing bad people will do bad things because the economy is bad and the president is black. But we have no real evidence.

For instance, the report insists that returning "disgruntled military veterans" from Iraq and Afghanistan are recruitment fodder for extremist and terrorist groups.

But, if you follow the footnotes, as John Hinderaker of the Powerline blog did, you'll discover that, according to the FBI, only 19 Iraq and Afghanistan war vets have joined the "extremist movement" (and some of them may have lied about their service). More than half of America's 1.4 million active-duty military personal have served in Iraq or Afghanistan (and there are roughly 23 million veterans in the United States). Any way you slice it, 19 yahoos amount to statistical noise so faint you would need one of those UFO-hunting dishes to pick it up.

My objection to the DHS report -- and DHS Secretary Janet Napolitano's thumbless grasp of why the report bothers people -- isn't that the agency is concerned with domestic terrorists. It should be, even though it wrankles a bit that this administration is so squeamish to describe Islamic terrorists as "terrorists" but is promiscuous with the T-word when it comes to right-wing Americans.

The evidence that al-Qaida & Co. are terrorists is widely available, but Napolitano boasts that she calls attacks such as those on 9/11 "man-caused disasters." She says she doesn't want to fuel "the politics of fear." But her own department dubs nebulous and ill-defined Americans as terrorists even though DHS has "no specific information" that they're plotting any attacks.

My real objection to this report is that its source material amounts to "everybody knows." Everybody knows the right is full of whack-jobs, hatemongers and killers, and if we don't remain vigilant, bad things will happen.

Just look at the coverage of these tea parties. To watch CNN, you'd think these were beer hall putsches, as if emulating the Boston Tea Party and demanding less government were straight out of "Mein Kampf."

I wrote a book on fascism which tried to show that what everybody knows isn't necessarily true. The idea that soldiers will return from war and become right-wing militants? Well, that has its roots in Fascist Italy, where veterans returned as black-shirted shock troops of "Il Duce," Benito Mussolini. The only problem was that they clamored for socialism -- the socialism of the trenches! -- and their leader had earned the title "Il Duce" as the leader of the Socialist Party.

The idea that American "hate groups" are right-wing and bristling with vets got new life with JFK's assassination at the hands of a disgruntled vet named Lee Harvey Oswald. Everybody knew right away that Oswald was an agent of "hate" -- and hate was code for right-wing and racist. Supreme Court Chief Justice Earl Warren summed up the instantaneous conventional wisdom when he blamed the "climate of hatred" for Kennedy's death. Everybody knew that the right was involved.

There was just one inconvenient truth: Oswald was a communist who, according to the Warren report, had "an extreme dislike of the rightwing" and had actually tried to murder a right-wing former Army general.

When Hollywood filmed the Tom Clancy novel "The Sum of All Fears," it changed the real villains from Jihadi terrorists to a bunch of European CEOs who were secret Nazis. Because "everybody knows" that's where the real threat lies.

Sen. John Kerry belonged to an organization of vets that considered assassinating American politicians. (Kerry denied participating in those meetings.) Barack Obama was friends with, and a colleague of, a domestic terrorist whose organization plotted to murder soldiers and their wives at a social at Fort Dix. A young Hillary Clinton sympathized with the Black Panthers, a paramilitary gang of racist murderers and cop killers.

Bring that up and you're a paranoid nutcase out of "Dr. Strangelove."

But if you're terrified of a bunch of citizens who throw tea in the water and demand lower taxes and less government spending, well, that's just a sign of political seriousness.

Because everyone knows who the real threat to the country is.