On Stimulus Bill, Centrists Are Over the Line 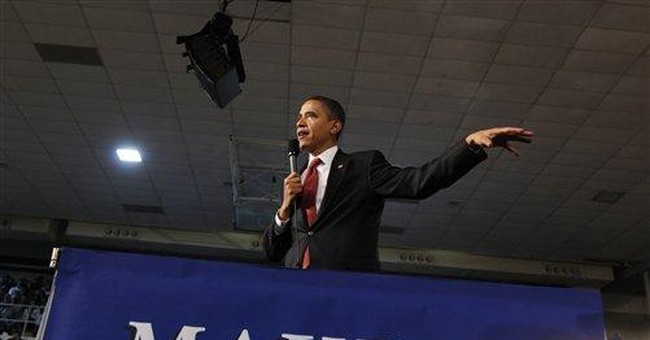 I'm with the liberals on this one. They're fuming at the self-proclaimed "centrists" in the Senate who've taken it upon themselves to trim the stimulus bill at the edges.

Led by Republican Arlen Specter, the centrists have boldly cut (perhaps temporarily) $100 billion or so from the stimulus package, in the name of fiscal discipline. But, as liberal critics such as New York Times columnist Paul Krugman rightly point out, they're cutting it to prove their "centrist mojo," not because they have real concern for public policy. If the bill had started out at $1 trillion, then $900 billion in porcine outlays would be deemed the "responsible" amount to spend.

For certain Beltway centrists, the highest principle is to prove that you are attached to no principle. Rather, your duty is to split the difference between the "ideologues." If one side says we need a 1,000-foot bridge to span a canyon, and the other side says we don't need a bridge at all, the centrists will fight for a bridge that goes 500 feet and no farther, then pat themselves on the back.

Yes, sometimes the middle position is the correct one. But there is no rule that says it must be.

Don't tell that to Specter, a living antonym for the word "Churchillian." In Sunday's Washington Post, he rationalized his trimmed-down bill by invoking John F. Kennedy, who said, "In politics, nobody gets everything, nobody gets nothing and everybody gets something."

Yogi Berra said it better: "When you come to a fork in the road, take it."

Now, to be honest, I think President Obama's stimulus bill is a monstrosity, a bloated behemoth unleashed on America with staggering dishonesty. The centrist "improvements" are like throwing a new coat of paint on a condemned building.

It's being sold as an emergency stimulus to deal with an immediate problem -- the economic downturn -- despite being more like a welfare-state wish list festooned with fiscal nonsense. Senate Majority Leader Harry Reid touts a whopping 58 percent of the bill as job-creating. No doubt that number is inflated. Even so, what's the argument for the other 42 percent?

For instance, why is an emergency spending bill weighted down with an authorization for $198 million in payments to Filipino World War II veterans, many of whom live in the Philippines? We owe them the money, but how does sending millions to Manila fend off the American "catastrophe" that Obama says is the price of inaction?

Principled liberals defend the bill while conceding that roughly half the discretionary "emergency" spending won't even start until two years from now. (Funny coincidence: That's right around the time Obama's re-election campaign will kick off.) Good social policy is good social policy, no matter how you get it enacted, they say.

Putting aside the question of whether the ornaments dangling from every branch of this legislative Christmas tree amount to good policy, there's still the matter of why Democrats are afraid of the normal process. Sneaking into the package hundreds of millions for, say, sex education, the National Endowment for the Arts and sod for the National Mall doesn't suggest a lot of confidence that Americans support such liberal priorities.

But that's OK. As the president is so fond of pointing out, the Democrats won. They're in the driver's seat. To govern is to choose, and these are the choices they've made.

The Democrats have shown no desire to craft real bipartisan legislation, which is their right, even if it contradicts Obama's campaign promises. And the vast majority of Republicans have shown little desire to back legislation that violates their principles simply for the sake of "doing something." The moderate mooncalves, who expect Republicans to sign on essentially for signing-on's sake, really want Republicans to stop being Republicans.

"I am supporting the economic stimulus package for one simple reason," Specter wrote in the Post. "The country cannot afford not to take action." Such thinking is the purest nonsense. Sure, if your house is burning down, you can't afford not to take action. That doesn't mean any action is better than no action. Grabbing a fire hose is good. Grabbing a jerrycan of gasoline and dancing the Macarena, not so much.

Of the myriad problems with difference-splitting, perhaps the most pernicious is that it is also difference-blurring. If the stimulus bill is good policy, let Democrats take the credit for it and Republicans the blame for opposing it. If it's a disaster, let all praise and honor go to the GOP and let Democrats pay the price.