What Obama Brings To Conservatives 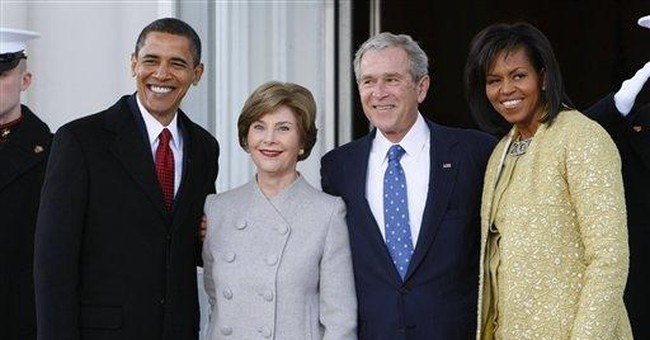 I am proud of and excited by the fact that we have inaugurated the first black president of the United States. He wasn't my first choice, but he is nonetheless my president. And if ever there were a wonderful consolation prize in politics, shattering the race barrier in the White House is surely it.

Conservatives who try too hard to belittle the importance of this milestone are mistaken on several fronts. First, this is simply a wonderful -- and wonderfully American -- story. Any political movement that is joyless about what this represents risks succumbing to bitter political crankery.

For instance, you will not soon see a German chancellor of Turkish descent. Nor will a child of North African immigrants soon take the reins of power in France. It will be a long time before a Pakistani or Indian last name appears on the mailbox at 10 Downing St. And yet these countries bubble over with haughty finger-waggers eager to lecture backward and provincial America about race and tolerance. Why not enjoy rubbing Barack Obama in their faces?

Of course, there's a partisan angle to Obama's presidency -- he is the head of the Democratic Party, after all -- but his success comes on the heels of a bipartisan racial success story. For instance, President Bush appointed the first African American secretaries of state.

As Obama loves to observe, America is more indivisible and united than many would have us think. "We are one people, all of us pledging allegiance to the Stars and Stripes, all of us defending the United States of America," he proclaimed in his career-making keynote speech at the 2004 Democratic convention.

It only follows that George Bush's America is also Barack Obama's America, and vice versa. That's an important lesson not only for foreign observers but for domestic partisans.

More important, opponents of racial quotas and other champions of colorblindness on the right should be popping champagne nearly as much as racial liberals are. Yes, yes, Obama's a passionate defender of affirmative action and the like, but the symbolism of his presidency cannot be contained within narrow liberal agendas.

Neither would I. The media understandably, if tediously, focus on how Obama's presidency is a deathblow to the legacy of official discrimination and racism. True enough. But the fact that a black man can become president of the United States may also be transgressive to all sorts of more relevant racial orthodoxies on the left and in the black community.

Obama's personal example is only part of the equation. He has voiced an admirable disdain for the notion that academic excellence is nothing more than "acting white." His famous Father's Day speech in 2008 showed that Obama was willing to lend his voice to the effort to fight black illegitimacy and absentee fatherhood.

This puts Obama behind the two most important ingredients for black success, at least according to most conservatives: a rededication to the importance of education at an individual level, and the restoration of the black nuclear family.

At a more political level, a black president surely undermines the argument that American racism is so endemic that a system of racial quotas must remain a permanent fixture of the political and legal landscape.

Obama is most frequently compared to Abraham Lincoln and Franklin Roosevelt. But he also has compared himself to Ronald Reagan, saying he'd like to be a similarly transformative leader, albeit from a different ideological perspective. Only time will tell how successful he will be on that front.

But the analogy may be apt in ways that he and his supporters may not fully appreciate. By hastening the end of the Cold War, Reagan took away the defining cause of the conservative movement. The right had other issues, to be sure. But anti-communism was the coalitional glue. And while principled conservatives were happy to trade a live campaign issue for a dead Soviet Union, the damage to conservative cohesion was real.

If Obama lives up to the dreams of his supporters in writing a new, post-racial chapter for America, he will have at once done more for America than any Democratic president in generations. But he also will have cut the knot holding much of the left together. As an American and as a conservative, I certainly hope that's the case. He's already made a good start of it just by getting elected.