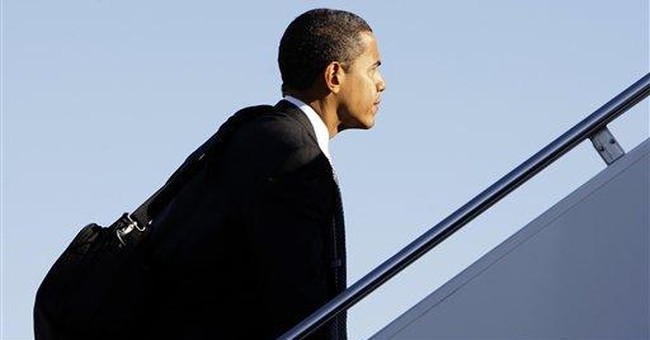 Under Barack Obama's plan, 95 percent of Americans will get a tax cut. John McCain's plan will deliver portable, affordable health care to all Americans. Obama has a plan to win in Afghanistan. So does McCain. There are plans for how to implement plans and plans for how some plans will be replaced by other plans. Go through their respective Web sites and you'll fine more plans than at the hall of records.

But none of it is real, not really. Some historians claim that 19th-century Prussian field marshal Helmuth von Moltke, not President Eisenhower, authored the aphorism that no plan survives contact with the enemy. But my guess is that the first Neanderthal who came back from a woolly mammoth hunting party with some flattened comrades and a lot of broken spears said something similar.

The simple fact is that planning is very hard. Even plans to build houses often require countless revisions. But planning for people is so much harder. Every weekend I have a plan for how my one 5-year-old child will spend her day. Keep in mind: I am literally the boss of her. She has no money, little education and no reliable means of escape. And yet, she foils my plans time and again. But somehow we're supposed to believe that a plan involving billions or trillions of dollars, millions of people (each with their own agenda) and thousands of communities influenced by countless interested parties and bureaucracies is not only possible, but the highest responsibility of our elected leaders.

Mao and Stalin had their five-year plans and benefited from the added flexibility that comes with the ability to kill millions of their own people, and yet that worker's paradise always seemed just one more five-year plan away. Every football team goes into a game with a plan. Only one comes out victorious.

This is not to say that some plans don't work out. But what makes for a successful plan is a complicated thing, the details of which will have to wait for another day.

The simple, relevant fact is that the more detailed and extensive a plan a president proposes, the less likely it is that it will be enacted. One basic reason for this - often overlooked by politicians and the journalists who cover them - is that presidents don't make laws in our system. Congress does. And Congress usually has plans of its own. Bill Clinton promised health-care reform, and his wife had a plan thicker than the New York City Yellow Pages. Congress never even voted on it.

Much like Obama, Bill Clinton barnstormed the country promising a middle-class tax cut. Once he got into the White House, that got filed under "never gonna happen." George H.W. Bush said "read my lips" about his plan to never, ever, ever raise taxes. It turned out that "never" is a term open to many interpretations.

Now, depending on your perspective, you might think such reversals are profiles in courage, and you might even be right. But the point is that it is juvenile to believe that voting for a president is synonymous with holding a referendum on a plan. And yet we have these interminable, often Jesuitical debates on what the fine print of the candidates' plans says. Journalistic fact-checkers take their jeweler's glasses to every footnote and appendix as if the ultimate merit of each candidate can be found in a binder.

Even worse, after every debate we are subjected to an endless parade of focused-grouped "swing voters" who think they're oh-so-terribly sophisticated for wanting to hear ever more details about this candidate's plan for education reform or that candidate's scheme for health care. It's all absurd intellectual vanity. These voters are undecided not because they haven't been spoon-fed enough policy detail, but because they haven't been paying attention and haven't bothered to do even minimal research about the candidates.

I'm not saying that candidates shouldn't have platforms. But voters - and journalists - should look at them as mission statements, not the political equivalent of instructions that come with a disassembled bicycle.

The real hints for how to choose a candidate, at least in a general election (as opposed to a primary), reside in the realm of judgment, philosophy, track record and temperament. And, using those criteria, the choice shouldn't be hard at all.

Sanders: We need to put an end to all this dark money, except, of course, for my PAC
Hotair
Report: 'Strong Paper Trail' Leads Durham Investigators to January through May 2017 Time Frame
Redstate