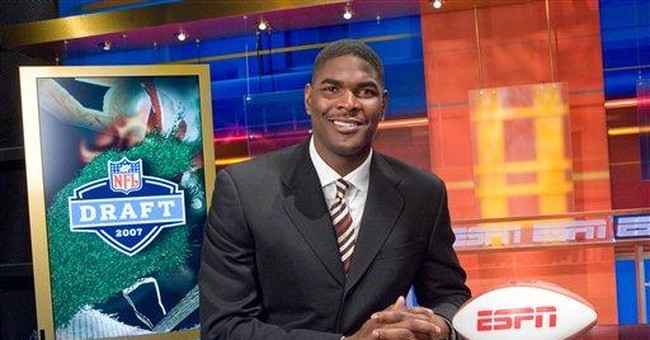 Earlier this month, ESPN awarded Tommie Smith and John Carlos the Arthur Ashe Courage Award at the ESPYs - the sports network's equivalent of the Oscars - for their once infamous, and now famous, black power salutes from the medal platform at the 1968 Mexico City Olympics.

The stench of self-congratulation surrounding ESPN's decision is thicker than the air in a locker room after double overtime. "As the passage of time has given us the opportunity to put their actions into the proper context," gloats USC professor Todd Boyd in an ESPN.com column, "their supporters can now feel vindicated while their detractors must eat their words."

The argument that Smith's and Carlos' critics must dine on their denunciations rests on an inch-deep nostalgia and the triumph of celebrity culture.

Comments by ESPN sportscaster Stuart Scott typify the inanity of ESPN's award. Scott, who was 3 years old in 1968, nonetheless told the Desert Sun newspaper that he remembers how "tense" the times were and how he remembers thinking, "Oh, that was cool for a black man to do that." He added: "As an adult, I get it even more now." Even more than when he was barely out of diapers? That's setting the bar high.

"I've got daughters," Scott said, "so I have to explain to them why that was so important, and how much - even after they did it - grief and hatred they had to face when they came back to the States, to their own country. And why that means they're courageous."

By this standard - for want of a better word - any self-indulgent protest at the Olympics is proof of courage. This is hardly surprising: Radical chic is a corporate marketing plan these days. Che Guevara is a hero suburban teens stick on their T-shirts, and once "revolutionary" music provides the soundtrack for the latest Nike ad.

In today's culture, is it even worth trying to remind people that the black power salute was, for those who brandished it most seriously, a symbol of violence - rhetorical, political and literal - against the United States? It was the high sign for a racist militia, the Black Panthers, which orchestrated the murder of innocents and allied itself with America's enemies. In today's lingo, you might even say black power was "divisive."

But even a more benign view of the salute shouldn't obscure the intense contradictions of ESPN's decision to honor Carlos and Smith. Both men were members of the Olympic Project for Human Rights, which wanted a complete black boycott of the '68 Olympics. The group considered an entire generation of heroic black athletes, including Jesse Owens and Jackie Robinson, to be Uncle Toms.

(Does ESPN endorse this piece of history, too? Yes? No? Hello?)

Another important distinction is that this was 1968, not 1938. By the end of the 1960s, America had seen two decades of steady - if too slow - racial progress. The black power vision of an irredeemably "racist Amerikkka" was all but blind to the desegregation of the military, the accomplishments of Owens and Robinson, and the civil rights acts of 1957, 1960, 1964 and even 1968. One hopes ESPN disagrees with those views as well.

There's also the fact that the black power salute amounted to an obscene gesture aimed directly at the Olympic ideal. "The Olympic Games as an ideal of brotherhood and world community is passe," declared radical black sociologist Harry Edwards in 1968. Edwards organized the OPHR and pushed for the Olympic boycott. "The Olympics is so obviously hypocritical that even the Neanderthals watching TV know what they're seeing can't be true."

In a sense, Edwards was right then - and now. The Olympic ideal of putting politics aside and celebrating pure athleticism has always been exactly that, an ideal. And all ideals are ultimately unachievable. China is using the Olympics to paper over the brutality of its repressive regime, just as Hitler did in 1936. In 1972, Palestinian terrorists - grateful for 1968's lesson in the propaganda value of Olympics media attention - slaughtered Israeli athletes. Nations are political entities, so you can't take the politics out of national rivalries.

The question is not, and never has been, whether the Olympic ideal can be achieved, but whether it should be pursued. By embracing those who spat on that idea, it seems ESPN thinks the answer is no. That is assuming ESPN gave much thought to the question in the first place.