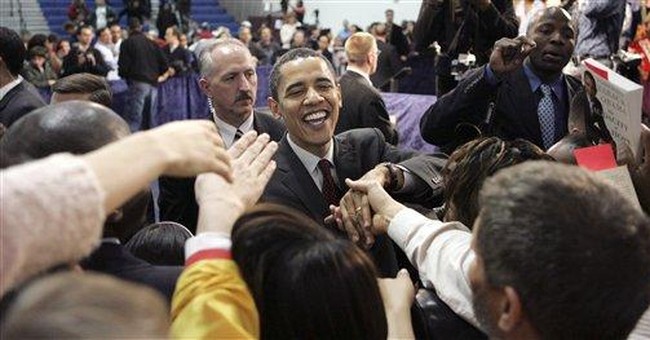 "Bill Clinton: Obama's White Half Won Maine," read the headline on the humor site Scrappleface this week. "Obama gets to play both sides of the race card," a fictional Bill Clinton told the site. "I told you he won South Carolina because he's black, like Jesse Jackson. So, to be consistent, I'd have to say he won Maine because he's white like Michael Dukakis."

There's more than a little truth here. It seems that Barack Obama can win blacks and that he can win whites; where he has trouble, electorally speaking, is winning blacks and whites.

You wouldn't know this from all the resplendent rhetoric about Obama's gorgeous mosaic of a campaign. Indeed, the audacity of Obama's hype is a marvel to behold.

"This is it," Obama proclaimed during his victory speech on Super Tuesday. "We are the ones we've been waiting for, we are the change that we seek." Obama insists that his is the campaign for those who want to move "beyond race," and, let the record show, there is a powerful thirst for a post-racial America, not least among conservatives.

So let us stipulate that it would indeed be wonderful if America could move beyond the intergenerational venom, guilt-mongering, orchestrated offense-taking and entrenched animosity that has characterized much of the black-white relationship over the years. Let us also concede that this is what Obama wants to do and what his followers want from him.

There remains the inconvenient question: Does it make any sense?

Rather than serving to heal America's racial wounds, maybe Obama's campaign is more like a dye marker that helps us better diagnose the complexity of the problem.

Obama has had his greatest success winning white votes in states that are nearly all white, particularly those with caucuses. In non-homogeneously white states, he's only won when he's added enormous shares of black votes to his prosperous white liberal base - as he did in South Carolina.

But in states that actually "look like America," he tends to get beaten by Hillary Clinton. He lost melting-pot states such as Nevada, California, Massachusetts and New York largely because he couldn't accumulate nearly enough white or Latino votes.

Some on the right have mischievously alleged anti-black sentiment among Latinos as one reason why Obama fails to gain Latino support. Many liberals have worried about a "Bradley effect" - named for former Los Angeles Mayor Tom Bradley - whereby secretly racist white liberals say they will vote for the black guy but don't follow through.

Although there's got to be some truth to this at the margins, I think it's mostly hogwash. Still, it says something fascinating about our political and racial landscape that the Democratic voters with the most experience living in multiracial, multicultural communities are the ones most immune to Obama's "beyond race" rhetoric. At the same time, the whitest states are the most gaga for Obama. (He beat Clinton 80 percent to 17 percent in white-supremacist-rich Idaho.)

One possible explanation for this might be found in the work of Harvard sociologist Robert Putnam. In 2006, the scholar of civil society and author of "Bowling Alone" released some controversial findings: The more diverse a community, the less trusting it becomes.

"In the presence of diversity, we hunker down," he told the Financial Times. "The effect of diversity is worse than had been imagined. And it's not just that we don't trust people who are not like us. In diverse communities, we don't trust people who do look like us." Social trust was at its absolute lowest in Los Angeles, one of America's most diverse cities, Putnam found.

The hard interpretation would be that diversity does in fact breed racism and ethnic resentment. But a softer, and I think slightly more plausible, reading would be that increased diversity breeds not so much resentment as realism - at least among rank-and-file voters.

It's easy for upscale liberals to talk about the glories of diversity because they live at Olympian heights, above the reality of multicultural America. For Obama's wealthy, white, liberal supporters, diversity is knowing a rich black lawyer, a wealthy Latino accountant and lots of well-to-do gay folks.

Meanwhile, for working-class white liberals who live in places such as Iowa or Maine, it's easy to see our racial divide in almost purely theoretical terms and therefore believe that purely rhetorical responses are sufficient; Obama says the right words, and that's all we need.

But for much of the rest of the country, people are more skeptical that high-flying talk about diversity and unity, married to fairly conventional liberal policies on affirmative action, immigration and the like, will do much to solve the real problems we face. They may have never heard such rhetoric delivered so well. But they've certainly heard it before.