Cell Mates are in Full Backpedal 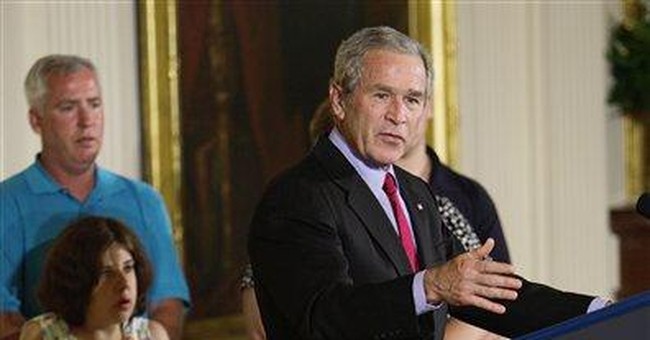 By now you've probably heard that scientists have discovered an elegant way to create the equivalent of embryonic stem cells (ECS) without having to create - and destroy - embryos. They just reprogram some skin cells and, voila, bypass all the controversial stuff. The long-promised miracle cures are still a long way off, if they're coming at all, and ECS research still has its boosters, but it seems pretty clear that stem cells have been decoupled from the abortion wars.

Still, there has been one amazing breakthrough. Thanks to stem cells, journalists are finally growing backbones.

At the 2004 Democratic National Convention, Ron Reagan Jr., the acclaimed dog show emcee, tried his hand at being an infomercial snake oil barker. "I am here tonight to talk about the issue of research into may be the greatest breakthrough in our or any lifetime: the use of embryonic stem cells," Reagan announced. After listing numerous diseases and injuries it could cure, Reagan delivered the pitch: "How'd you like to have your own personal biological repair kit standing by at the hospital? Sound like magic? Welcome to the future of medicine."

"Wait! There's more! Order your Biological Repair Kit in the next seven minutes, by voting 1-800-D-E-M-O-C-R-A-T, and you'll receive a second repair kit at no additional cost, as well as this amazing two-in-one steak knife that can cut through your dignity and still be sharp enough to slice this tomato! Operators are standing by."

OK, I exaggerate. But the tone wasn't far off.

Reagan wasn't alone, either. Then-vice presidential candidate John Edwards proclaimed in 2004, "If we do the work that we can do in this country, the work that we will do when John Kerry is president, people like Christopher Reeve are going to walk, get up out of that wheelchair and walk again."

Rep. Jerrold Nadler (D-N.Y.) announced a few years earlier: "We must not say to millions of sick or injured human beings, ŒGo ahead and die, stay paralyzed, because we believe the blastocyst, the clump of cells, is more important than you are.' ... It is a sentence of death to millions of Americans."

Rep. Nancy Pelosi (D-Calif.), outraged by conservatives seeking to inject religion into politics, nonetheless proclaimed: "Mr. Speaker, the National Institutes of Health and Science hold the biblical power of a cure for us."

How soon? Very soon. Rep. Anna Eshoo (D-Calif.) promised that "we stand on the brink of finding the cures to diseases that have plagued so many millions of Americans."

Columnist Charles Krauthammer, who is not only a doctor but also bound to a wheelchair because of the sort of spinal injury Democrats insinuated could be cured with a Democrat in the White House, said it well. This flimflammery was "a cruel deception perpetrated by cynical scientists and ignorant politicians. Its purpose is clear: to exploit the desperation of the sick to garner political support for ethically problematic biotechnology."

And where was the press during this riot of false hope and cruel demagoguery, where politicians were in effect telling sick people they could vote for a cure for themselves or their loved ones?

The short answer is that they were either on the Democratic bandwagon, or they were outside helping push it.

When President Bush was grappling with embryonic stem cell research in 2001, Newsweek's science correspondent, Sharon Begley, warned in a cover story that this might be "a cruel blow to millions of patients for whom embryonic stem cells might offer the last chance for health and life."

In the current issue of Newsweek, Begley now tells us that the technology was always oversold. The notion that stem cells will lead to quick cures and transplants is "more fiction than fact," Begley tells us - now.

The New York Times, in the words of Yuval Levin, formerly of the President's Bioethics Council, "has been tenaciously partisan and frankly dishonest in its advocacy for embryo-destructive research in the past decade." The Times almost never used the word "cloning" and downplayed the risks to women who donated eggs. Now, it points out to readers that not only did the old method have considerable drawbacks but that the task of delivering cures and therapies remains "daunting." But, as Levin writes at Commentarymagazine.com, the Times "sees that the fight may be drawing to a close," so "it's time to put away the word games and speak openly about what has always been at stake."